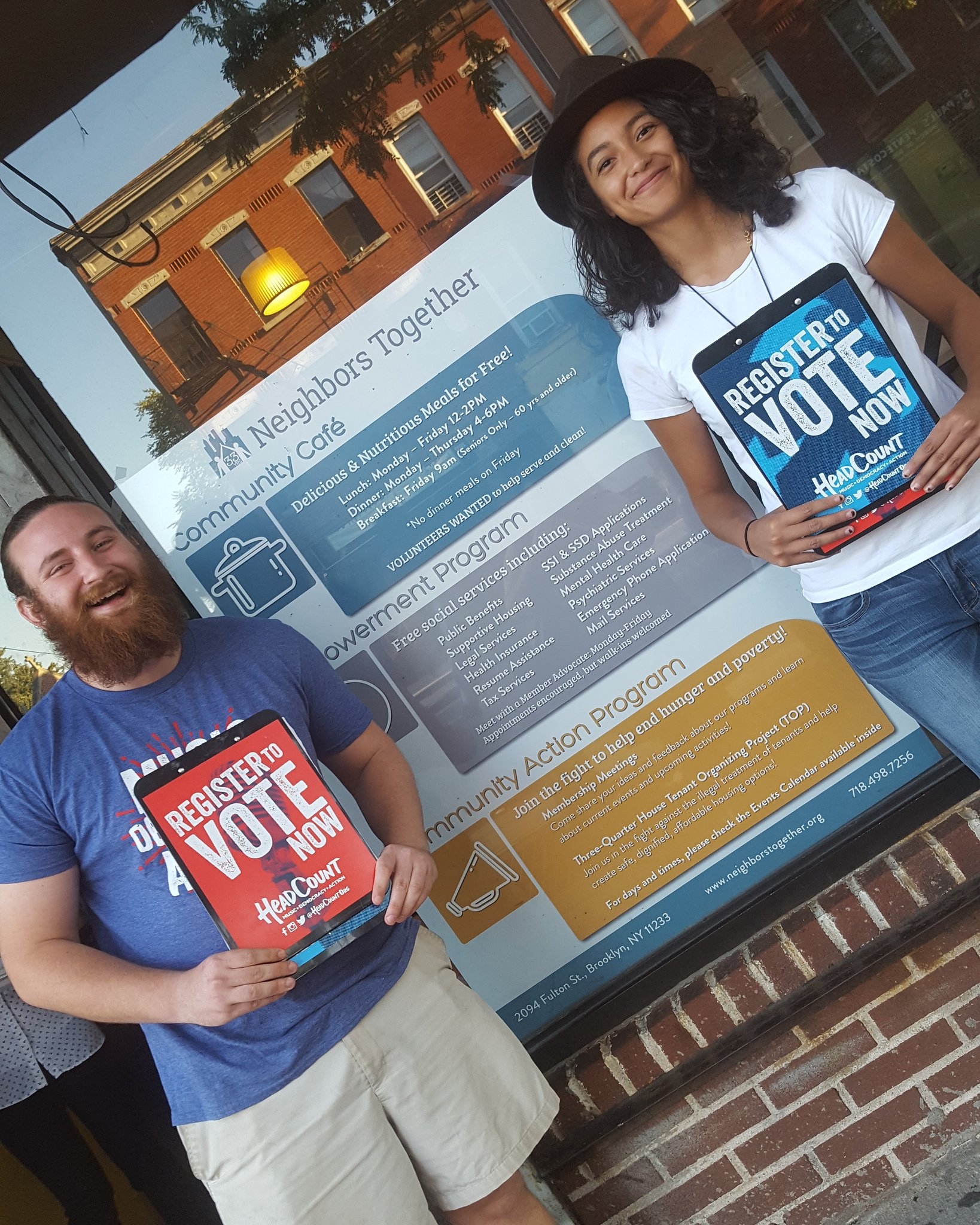 WhyHunger has teamed up with concert voter registration organization, HeadCount, to bring voter registration drives to local food pantries across the U.S. in order to make it easier for their community members to vote. HeadCount traditionally hosts pop-up voter registration drives at over 1,000 concerts a year where their usual target audience is millennials. This summer, they saw an opportunity to partner with WhyHunger and their food access partners as natural extension of their mission to reach folks whose voices are too often left out of the political process.

Recently, we caught up with Executive Director of HeadCount, Andrew Bernstein, as he and the HeadCount team were setting up the voter registration table at a local NYC organization that partners with WhyHunger, New York Common Pantry. We asked Andrew why partnering up with food pantry locations could turn into a soon permanent direction for HeadCount’s mission; “HeadCount was founded on the idea that if you want to see change in the world, then you have to do something about it. And the very first thing anyone can do is vote. This is a sacred right and if we don’t use it, we can’t complain…The energy that we’ve managed to organize in the music community, [making sure concert goers are registered to vote], to use that and go beyond the music community…Coming to a food pantry is the next step in the natural evolution, and is honestly far more important here than we could ever do at a concert.”

And the team at New York Common Pantry echoed the connection between voter registration and their work to end hunger and build food justice.

“We understand that food insecurity is part of a larger issue, which is poverty. In order to address the dynamics that perpetuate poverty, we need elected officials willing to listen and work to fix systems in the immediate and the long term to alleviate food insecurity,” explained Daniel Reyes, Deputy Executive Director at New York Common Pantry. “By providing the space for partners like WhyHunger and Head Count to register potential voters we are actively manifesting our mission to alleviate hunger across NYC. Our members and guests are empowered to use their vote to select candidates who will fight for the issues that are dear to them, including alleviating food insecurity.”

Both WhyHunger and HeadCount believe in making sure that every voice is heard, and that no one is left out. Bernstein summed up the importance of these types of partnership best, “We are able to meet people who are often not addressed and not reached by campaigns to get them involved — people who maybe feel they don’t have a voice, maybe people who have the most at stake.” Essentially, this partnership helps to increase the voices of those who matter the most during election time.

Friday, October 14th is the last day to make sure registration forms are in for New York. You can register to vote here or check for your state’s final voter registration day here.