Dolores Huerta, co-founder and leader of the United Farm Workers of America with Cesar Chavez, fights for a living wage and good working conditions for migrant farmworkers. 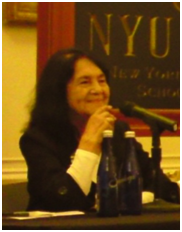 Dolores Huerta is the co-founder of United Farm Workers of America, AFL-CIO (UFW), President of the Dolores Huerta Foundation, and a tireless organizer and advocate for the rights of low-wage workers, women and children. She is best-known for founding and leading the National Farm Workers Association – the predecessor to the UFW – with Cesar Chavez in 1962. Her vivid description of the injustices experienced then by farm workers through the San Joaquin Valley in California – lack of cold drinking water, toilets, and anything approaching a living wage or unemployment insurance – made us realize how far we have come and how far we still have to go. A living wage and decent working conditions for migrant farm workers are still lacking in New York State and other parts of the country.

Is It All About Race?

A recurring theme in Dolores Huerta’s messaging is the dominance of race in the current campaigns against undocumented immigrants in the U.S. The frenzy is aimed at black and brown undocumented workers, not white ones. What is missing in the frenzy is that all these undocumented are working people who have come to the U.S. to work. They are growing and harvesting our food, working in our restaurants, cleaning our houses, looking after our children and paying social security taxes – in other words, contributing to our economy.

Another huge gap in the immigration debate is why they have come to the U.S. They have come because they lack jobs and opportunities, and this is largely due to U.S. policies. The North American Free Trade Agreement (NAFTA) has allowed U.S. subsidized corn to flood Mexico, leading to the loss of eight million jobs of small-scale farmers and farm workers. They have come north to survive. Another factor is the dominance of retail giants such as Walmart, against which Mexico’s bodegas and stores cannot compete. A third is the rise of U.S.-Mexico border sweatshop Maquiladores which extracts dollars from Mexico’s economy and nevertheless can at any time transfer Mexican workers’ jobs to China.

Is There A Discrimination Pattern?

Huerta also discusses the history of colonialism and its present manifestations. She compares the U.S. Marshall Plan for Germany and Japan after World War II, which built up German and Japanese industries and corporations as trading partners for the U.S., with U.S. free trade and economic policies in Latin America, which were aimed to extract wealth from its countries. She shows how countries which reject U.S. economic policies are demonized in U.S. media. Venezuela’s nationalization of its oil has been used to reduce literacy, invest in education, healthcare, and employment for its people but you would be hard pressed to hear anything about this in the New York Times coverage. The dominant coverage of Latin America in the Times is negative, she says, at least when its policies conflict with U.S. interests. 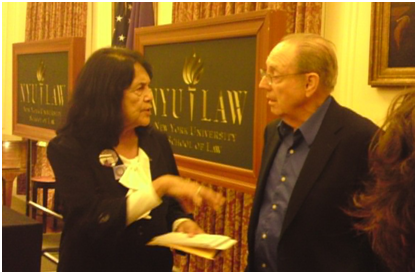 The bigger picture, according to Huerta, is the question: Where is all this hatred coming from? Why are right-wing politicians and Tea Party activists campaigning to revisit the 14th Amendment of the Constitution and take away citizenship from children born in the U.S. to undocumented aliens? Why is this frenzy leading to Latinos being killed? Is this another manifestation of the nativist stream in U.S. politics? How much is this frenzy being stirred up by right-wing media?

Huertas’s bigger picture is very different. We are one human race, homo sapiens, expressed in many cultures, nations and identities. We all come originally from Africa; we are all Africans of different shades and colors. We have to get rid of racism which, in her view, colors everything. There are many tools to accomplish this. One of them is law which can change the situation of people, including farmworkers and domestic workers. Another is registering people to vote and organizing and advocating for communities, which can convince people that they already have power and can access that power. We have to reach “the scared people,” Huerta says, not only in the U.S. but also elsewhere in the world since Europe is also facing a backlash against immigrants. We have the opportunity to change things since “all change comes from the bottom.” We need economic justice and we are the only ones who can create this. We need to keep our ears and hearts to the ground. She reminds us that “America” is not just a place but is an idea of freedom, democracy and equality which we have to create anew.

A final interesting fact: Dolores Huerta actually coined the phrase “Si Se Puede!” that Barack Obama, a community organizer, adapted for his presidential campaign as “Yes We Can!” At a White House dinner he admitted to Huerta, “I stole your slogan.”