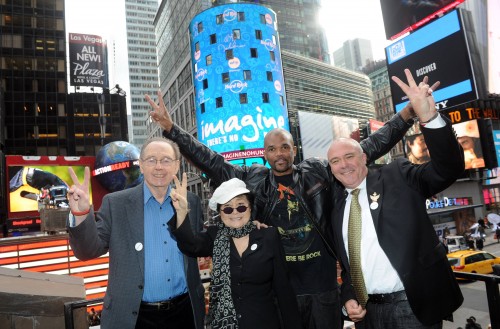 Every day Times Square is full of bustling New Yorkers and tourists passing through — some stopping to stare at the giant multimedia screens that fill the sky, others just moving through to their final destination. On Monday, Nov. 19, there was more than your normal hustle and bustle. A few minutes before 1PM women donned in white spandex outfits and tube like structures around their head exited the side door of Hard Rock Cafe and began to walk to various different locations around Times Square? 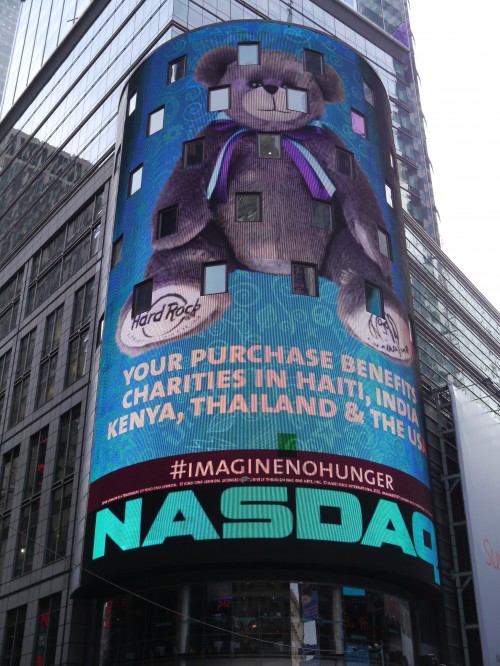 Many pedestrians slowed to take a look and ponder the women in white, others stopped dead in their tracks and grabbed their cameras. Moments later, Yoko Ono Lennon, WhyHunger’s Executive Director Bill Ayers, Hard Rock International President and CEO Hamish Dodds and Darryl “DMC” McDaniels stepped out onto the Hard Rock Marquee as John Lennon’s iconic song Imagine began to play over the loudspeaker. Donned with Imagine There’s No Hunger artwork, a call join in the fight to end childhood hunger splashed across the giant screens of Times Square, including the NASDAQ board, and thousands of supporters across the globe took to Facebook and Twitter via hashtag #ImagineNoHunger to spread the message of a hunger free world and call on their fans and friends to take action.

“I think if John was here he would be very proud this program has his name and his song and also that it is successful,” Ms. Ono said to The New York Times  at the event. “That is very important. He would be standing right next to me, I’m sure.” 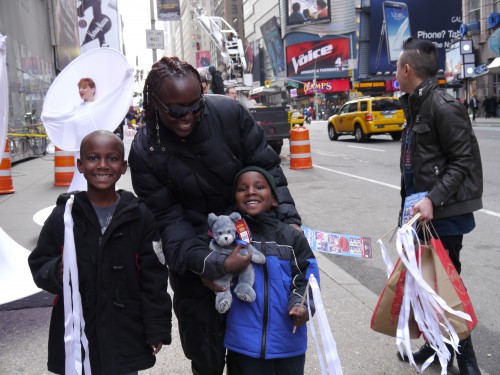 The Imagine There’s No Hunger campaign is in its fifth year. Since its inception the campaign has raised over 4.5 million dollars to help communities produce 5.5 million meals to children in 15 different countries. The campaign succeeds by supporting grassroots organizations on the ground in these countries working to implement sustainable agricultural solutions to end hunger and poverty. This year proceeds will go to partners in Kenya, Thailand, India, Haiti and the U.S., including long time WhyHunger partners in New York and New Jersey who are are on the front lines, providing food, water and critical services to their neighbors in the aftermath of Hurricane Sandy and continuing the work of long-term recovery.

To sum up the necessity of the campaign, one Times Square passerby commented, “There is so much abundance there is no need for people to have to go hungry or even worry about how they are going to feed their families.” Charmayne, another participant in the campaign kickoff, said, “It’s a shame how we still have people in this country, right here, who are starving, with so much available. A world without hunger is a world with no one starving.” Though not everyone was able to be in Times Square for the launch of the campaign, and witness the wonder it created, they are still able to be a part of something much bigger: Join us in the fight against hunger and poverty. Donate at www.hungerthon.org or text IMAGINE to 50555 (message and data rates apply) to learn more.

Join the conversation on Twitter by following our hashtag: #ImagineNoHunger!