The 2013 Harry Chapin Self-Reliance Award winners spent three days in New York City with us this week– always a highlight of our year! They were honored at the WhyHunger-Chapin Awards Dinner on Monday along with Yoko Ono Lennon and Patrick Sullivan of RightsFlow by Google, and had two days in the field in Brooklyn networking and on site visits. (Thanks to Phoenix Community Garden, Neighbors Together, and East New York Farms! for hospitality.)

Tuesday’s Networking Day was especially energizing; the five groups, along with WhyHunger staff and Okello Sam of Imagine There’s No Hunger partner Hope North in Uganda, spent the day in a community garden,  sharing stories, discussing successes and challenges, and discovering the common threads in their work.

Check out the album below for shots from the day! (Photos by David Hanson.)

And here’s one of the highlights from Monday’s Awards Dinner: Okello Sam of Hope North presents Yoko Ono Lennon with a Ugandan drum, and recognition of her incredible support of the Imagine There’s No Hunger program. For more from the Awards Dinner, click here. 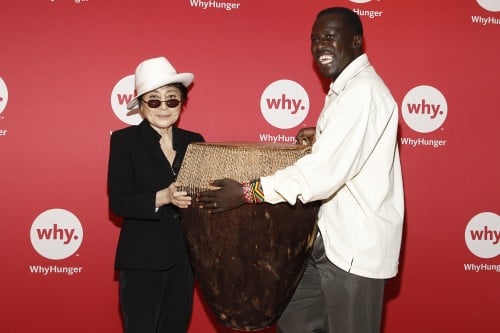