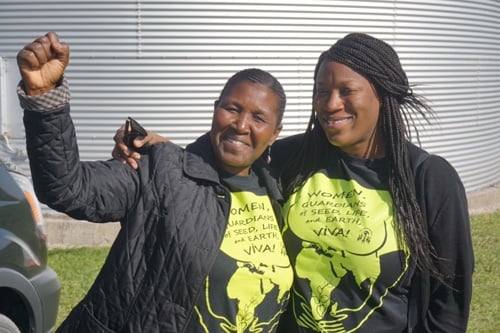 I had the pleasure of getting to know Norah Mlondobozi when she visited the WhyHunger office and we became roommates as we participated in the U.S. Food Sovereignty Alliance (USFSA) Assembly held last fall in Iowa for a few days. Norah is a member of the Rural Women’s Assembly (RWA), which is a coalition of rural women in southern Africa organizing and advocating on the issues that impact them including land rights, xenophobia, violence against women and more.

As Norah shared her story what immediately stood out for me are the similar struggles Blacks face whether here in the US or in Africa. Norah spoke about how for so long Black South Africans had no access/ownership of the land that they worked on, and then in 1994 at the end of Apartheid promises were made to redistribute the land, but it largely didn’t happen. And those that were given land, were given bad, unproductive land so the officials could then turn around and say “see, Blacks can’t produce or aren’t educated/profitable enough to own land” and then take it back. Sounds like a familiar process, right?

I admit, for me personally, I tend to have a jaded perspective or view that this longtime system and cycle of oppression will seemingly never end for various reasons, personality included. But most of all, it’s based on my experience as a Black woman in the US and that of my family’s experiences throughout time. Struggles of discrimination, lack of access to resources, police brutality, etc. are present whether it’s 1947 or 2016. My mom however is a great woman of faith who can continue to find hope in any situation. Similar to Norah, who has more hope with less, compared to me in terms of her rights as a Black woman in South Africa vs. a Black woman in the US, and yet she still believes that things will change, even if only little by little, as long we continue to work for it and spread education to others. This can seem like a daunting task, but one that Norah and other indigenous leaders around the world are willing to take on to create change. Below is a brief Q & A from my time with Norah:

Calondra: Tell us a little about where you’re from.

Norah: I’m from the Mopani District of South Africa, which is very rural and where the mopane worms are a valuable source of income and food because they have lots of protein; however, they are being impacted because of climate change and not enough rain. I’m a small-scale farmer on common land that was previously owned by a white commercial farmer and I have 8 people on my farm where we grow vegetables like green peppers, okra, green beans and cabbage.

Norah: As a small-scale farmer I am interested in fighting for agroecology and learning how to farm that way. Our government only mainly supports commercial farmers and when they do give us something it’s GMO seeds and pesticides to produce maize.

Calondra: And how are you doing that work?

Norah: I am connected with other rural women through the Rural Women’s Assembly organization. The focus is on rural women, because we are primarily responsible for producing food but don’t have enough access to land. In the SADC region of South Africa, men mainly have the right to own land. Through this group we are fighting against xenophobia, violence against women and fighting for indigenous seeds, land rights and for women to recognized as food producers. The commercial farmers export food out of the country. What we produce feeds the people.

Calondra: What’s something you learned on your visit to the US?

Norah: As someone who produces tomatoes I was told that it was impossible to do it without pesticides. Then I came here, and I’ve had very nice, tasty tomatoes grown organically – no pesticides. There are also more urban markets here and a lot of food, so much food.

Calondra: What is one of your struggles?

Norah: Lack of resources. It’s very hard to mobilize and reach other women, especially in deep rural areas to spread the word about agroecology and help them unlearn what the companies and big foundations have taught them. Representatives from the Gates Foundation and Department of Agriculture officials go around “advising” people to use pesticides/GMOS, and promise high yields. And many tend to trust them, because they have seen success at being able to produce enough to make a living. But no one really talks about or advises on healthier alternatives like agroecology.

Norah: Progress is happening. A commercial farmer who has used pesticides for years is noticing that the land isn’t good. He is now using compost and embracing agroecology and working with our local Department of Agriculture to have a couple of officials who can train others. We’ve also identified a farm where we plan to produce maize, and then we can grind it to make “mealie meal,” a staple food that we eat every day, and can sell to the community and save and distribute the seeds. Non-GMO seeds. We just need more land, access to the market and less restrictions, that will allow us to have more control and produce our own food the way we want.

As you read it, I hope you learned a little bit about Norah and what she’s fighting for, and got inspired as I did, to continue to support and stand in solidarity with those fighting at the forefront to make this world a better place. Thank you Norah for sharing with us! To learn more about the Rural Women’s Assembly visit here.