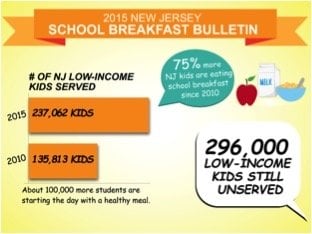 WhyHunger and Hunger Is are proud to support breakfast programs in NJ.

The New Jersey Anti-Hunger Coalition is co-chair of the Food for Thought Campaign which has successfully increased the number of low income students eating breakfast by 75 percent. When the campaign began five years ago, New Jersey was 46th in the country for students receiving a free school breakfast. Adele LaTourette, the Coalition’s Director worked with Campaign co-chair, Advocates for Children of NJ, to form a broad based grassroots coalition that included parents, educators, the New Jersey Department of Agriculture and several other local and statewide hunger/poverty organizations. National campaign partners are the Food Research and Action Center, and the American Dairy Association and Council.

The campaign also works with the New Jersey Department of Education to promote “After the Bell” breakfasts. Most schools were offering breakfast before school starts and the response was sparse because of the time. The coalition promoted Breakfast in the Classroom and “Grab and Go” which the Department of Education deemed as instructional time, the best of both worlds- eat and learn.

Because of the efforts of this broad based coalition, more than 100,000 additional children now have free breakfast in the classroom and New Jersey is ranked 23rd in the nation, a far cry from 46th but still not good enough. The Food for Thought Campaign is continuing its work and is targeting school districts with the lowest participation rates. The Campaign is also expanding its efforts, working to ensure that every child in New Jersey has access to a healthy meal, three times a day, 365 days a year. These efforts focus on targeted communities in New Jersey and expanding community access to both the summer food service program and the after school supper program.

This is an excellent example of a grassroots movement that also involves government and businesses such as the Dairy Council and never gives up.