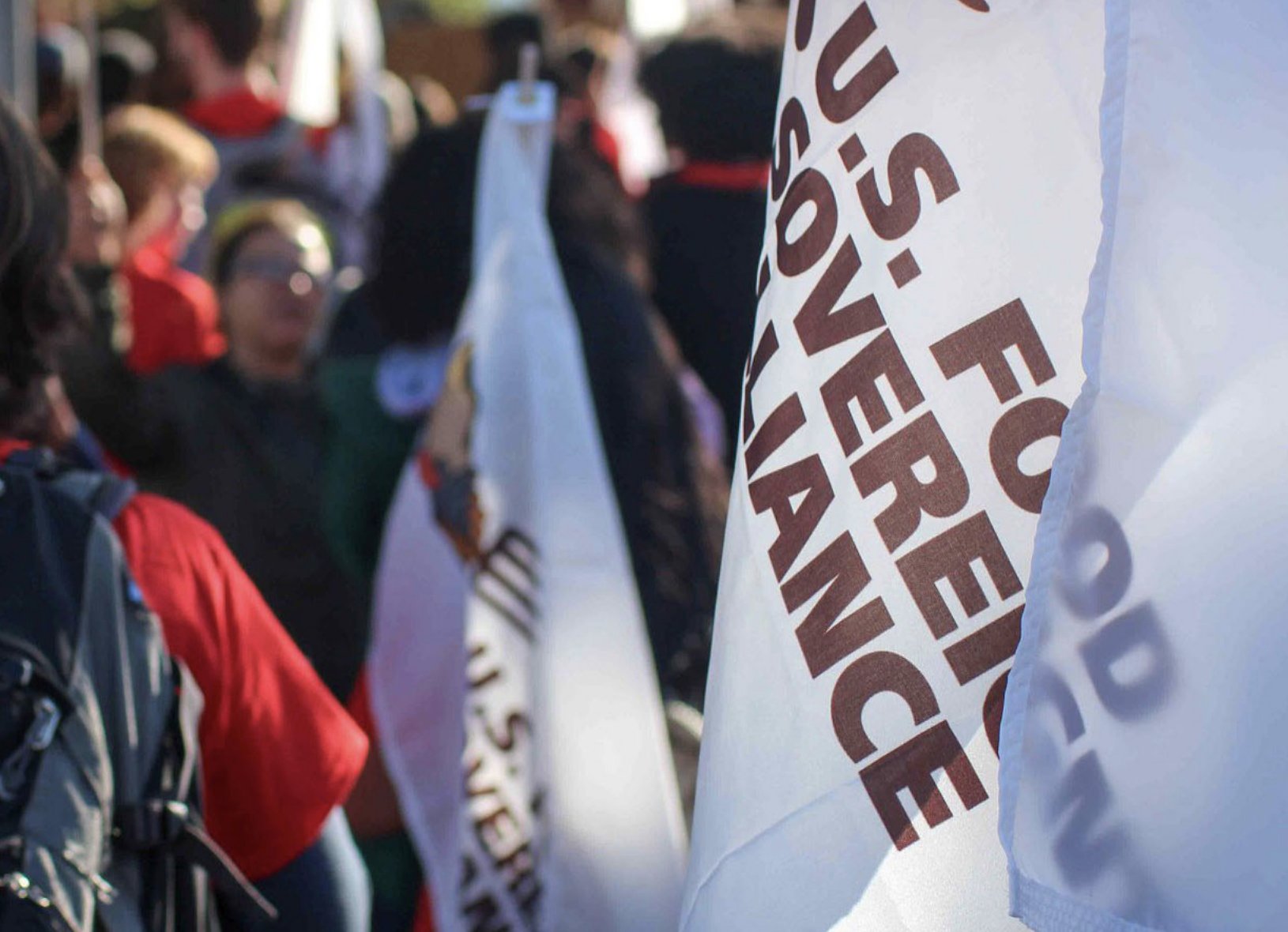 In October of 2018, the US Food Sovereignty Alliance (USFSA) hosted its fourth National Assembly. Representatives from seventy-one organizations and seven countries trekked to Bellingham, Washington, where they shared knowledge, strategized, and drafted demands for a just food system.

Over the assembly’s three-day run, the USFSA filmed a series of interviews with members of attending grassroots organizations. These short films and their accompanying report, titled “Food Sovereignty Stories”, offer brief, potent glimpses into the local, national, and global fights for food justice. While the term ‘food sovereignty’ is broadly defined as “a vision for democratic control over food and agricultural systems,”1 these grassroots stories situate the movement in the center of a web of intersecting issues. As the Food Sovereignty Stories show, food sovereignty is not only about food; it’s also about Indigenous sovereignty, workers’ rights, women’s liberation, immigrant rights, and environmental justice. The resulting film series paints the fight for food sovereignty as a living, multifaceted movement – one which has the potential to cool the planet, enshrine human rights and dignity, restore ecosystems, and heal the harms of colonialism through the deceptively simple mission of creating democratic food systems.

Alaska’s Big Village Network – one of the organizations featured in the film series – perfectly encapsulates the intersectionality of food sovereignty. By design, the organization’s work integrates the causes of food justice, environmental justice, and Indigenous sovereignty. As Carl Wassilie, a member of the Network and the Yup’ik Nation explains, “In the context of the Western system, the ocean and rivers are our garden in Western Alaska, and the tundra is our garden. That’s where we harvest and gather food.” The environment is the source of food; protecting it protects the food supply. When the organization defends the Arctic Ocean from Shell’s oil drilling, it also protects the wild fish populations native to the region. In turn, these wild fish provide a culturally appropriate food source for some Alaskan Indigenous communities. 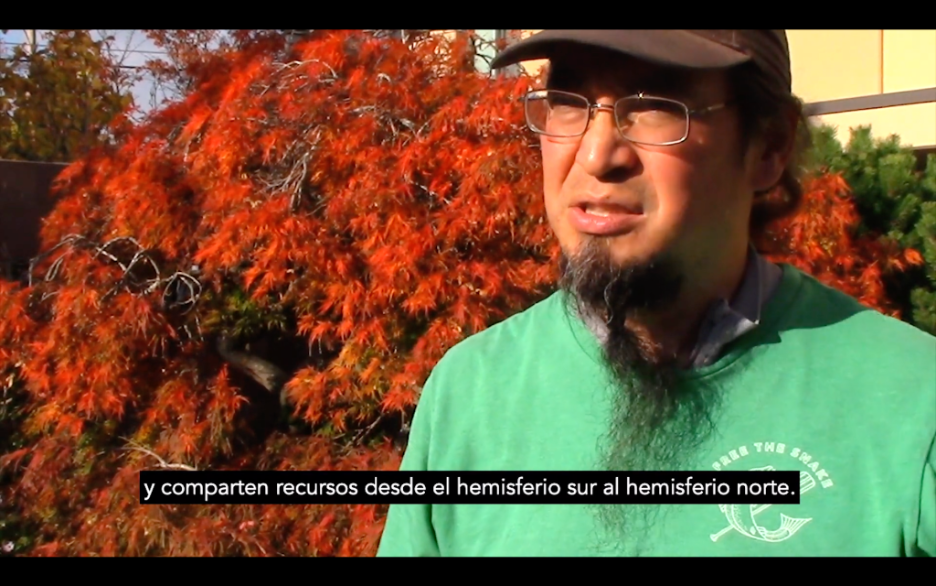 “Food sovereignty for me is that access and that cultural importance of the sacred animals, sacred water, and sacred land that provide for us and have been providing for us for thousands of years,” Wassilie says. “That’s the basis of my idea of food sovereignty—the land, the water, the mountains, and the air. We have to take care of them.” Alaska’s Big Village Network’s work shows that food sovereignty, environmental justice, and Indigenous sovereignty are inextricably linked.

La Organización Boricuá de Agricultura Ecológica also intertwines their approach to food sovereignty with conservation through their emphasis on agroecology. Agroecology is broadly defined as “an agricultural method based on the traditional knowledge of those who cultivate the land and a way of life.”2 Unlike industrial agribusiness, agroecology takes place on a small, local, and sustainable scale. Instead of depleting and polluting the land, agroecology regenerates it (you can learn more about agroecology here). For more than thirty years, Organización Boricuá has used agroecology as the basis of its work to achieve food sovereignty. In 2017, when Hurricane María hit Puerto Rico, Organización Boricuá deployed Agroecological Mutual Support Brigades to help farmers rebuild their farms, simultaneously securing food for locals, livelihood for farmers, and protection for farmland and the surrounding environment. “We move from farm to farm, plot to plot, community garden to community garden, expanding a network for agricultural work,” Jesús Vázquez Negrón, the organization’s general coordinator, explains. “At the same time, we are also training ourselves on the farms and protecting the water, defending the land, and defending the rights of those who work and take care of the land.” 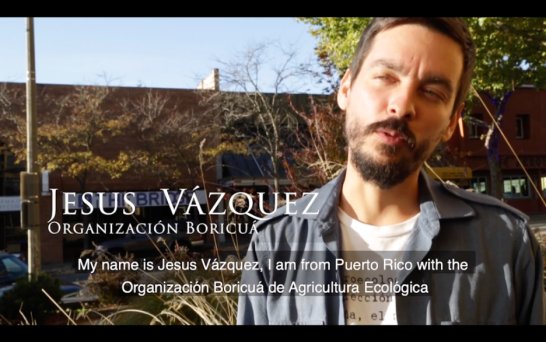 Many organizations in the film series stressed that democractic food systems can’t exist without justice for food workers. Farmers, fishers, and restaurant workers often struggle with food insecurity, facing harsh working conditions and low wages. As Jonathan Roberts, a member of Detroit Food Policy Council, points out, food sovereignty can’t exist when food is overproduced and the very people who make it still go hungry. “Food workers like servers and bartenders and cooks can’t even afford the food that they are preparing and serving to customers,” he says. Brenda Bentley, an organizer for Bellingham, Washington’s Community to Community Development (C2C), echoes this point. “A lot of our farmworkers… in this county go to the food bank, and that’s disgusting.” The fact that farm and restaurant workers are paid less than the value of the food they produce lays bare the extractive nature of the current food systems. Food sovereignty can only be achieved when food systems exist first and foremost to provide nutritious food for all  – not to increase profits off the backs of workers.

“Food sovereignty for me is that access and that cultural importance of the sacred animals, sacred water, and sacred land that provide for us and have been providing for us for thousands of years,” Wassilie says. “That’s the basis of my idea of food sovereignty—the land, the water, the mountains, and the air. We have to take care of them.” 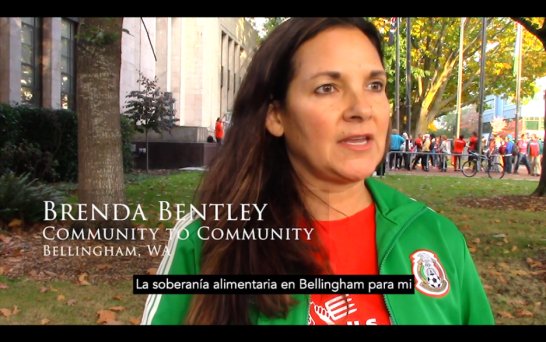 Bentley also highlighted the intersections between food sovereignty and immigrant rights. “Food sovereignty in Bellingham for me has been trying to get a sanctuary ordinance for our undocumented community,” she said. “People don’t feel safe here.” Because of recent ICE raids in Bellingham, many undocumented farmworkers cannot buy food in town without risking detention or deportation. Securing protections for undocumented immigrants would remove this barrier to food access, allowing them to buy food without the threat of violence.

Because of food sovereignty’s wide-reaching intersections, building a just food system can seem like daunting work. But as Sophie Ogutu, an activist working with the Kenyan branch of the World March of Women, points out, the broadness of the movement’s base gives it the potential to create real, transformative change. “We cannot do it in solitude,” Ogutu says. “For us, being here really strengthens and helps us to build this together.” At USFSA’s Fourth National Assembly, food sovereignty groups began doing just that: building together. Through collective knowledge and solidarity, they built a shared vision for the future – one where access to nutritious food is a basic human right for all. There’s still plenty of hard work ahead, but there is also growing power in the fact that none of these groups are working alone.

“Coming here in the USA and seeing a lot of people also hungry in a very fast-growing economy country breaks my heart, but it also gives me a lot of hope when I see so many people to discuss and address those issues,” Ogutu says. “Without hope we have nothing.”

Timothy Karoff is a WhyHunger Communications Intern. He is interested using storytelling to upend neoliberal narratives around hunger, poverty, and climate change.