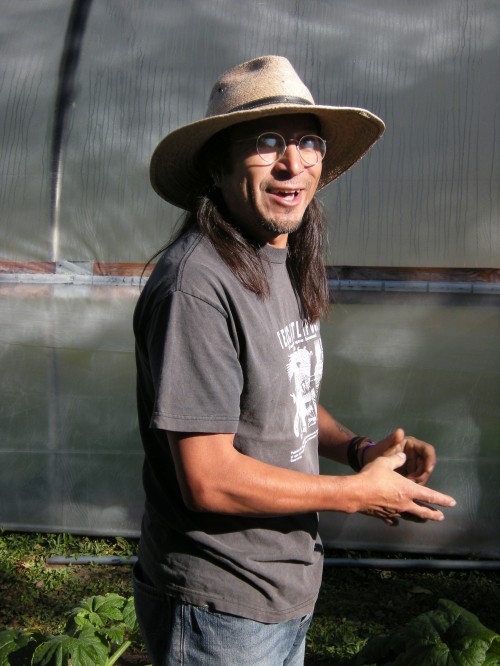 Re-posted with corrections:  This article was originally posted in December 2011.  Changes were made to reflect that the AFSC in New Mexico provides training to beginning farmers — not the Agri-Cultura Network as previously reported.

Fidel introduced himself as a musician and traveling Aztec dancer to our crowd of 30+ participants at the USDA-sponsored Community Food Projects (CFP) grantees meeting taking place in Albuquerque, New Mexico recently. We had just arrived at his backyard urban farm in the South Valley community of Albuquerque as a part of a tour of the CFP-funded “Community-based Food Security in Albuquerque Public Schools and South Valley” project. “I’m not a farmer,” Fidel demured. “I’m an entrepreneur learning the business of agriculture.” Could have fooled me, I thought. I was standing in front of an impressive hoop house-cum-season extender in late October looking at rows of tasty greens nearly ready to harvest for market.

Fidel recently graduated from the year-long new farmer training program sponsored by the American Friends Service Committee (AFSC) and is now a member of the Agri-cultura Network spearheaded by Don Bustos and the AFSC New Mexico through their CFP grant.  Fidel had been looking for a part-time job to supplement his creative but non-lucrative career writing and recording music when he was introduced to Don through a local economic development corporation. His eyes, barely peeking out from under the brim of his floppy cowboy hat, gleamed with wit as he described this new “part-time” job he landed: “I work 25 hours a day, 8 days a week. Any of you want to sign up?” Despite the quips Fidel was clearly proud of what he was accomplishing — not only has he created jobs for his community (he employs 8 farm hands, including 1 cook) but he’s providing food for a community that often goes without access to freshly harvested vegetables. “We’re not trying to feed the world,” he commented. “We’re just trying to grow enough to feed our families and to make a living.” 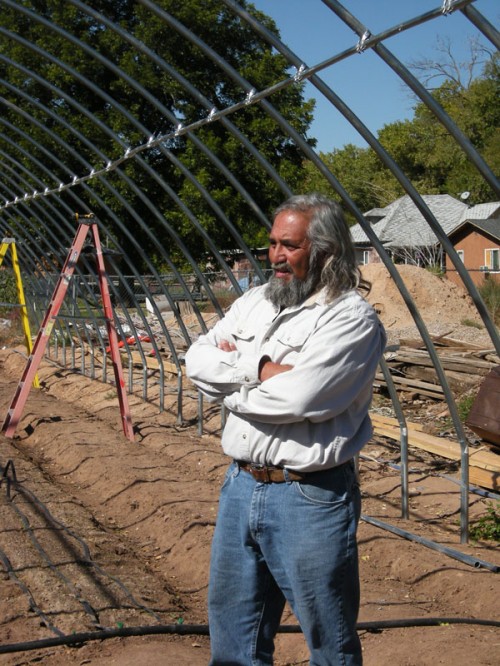 That seems to describe the genius behind the approach of this fast-growing and impactful project that was the design of the seemingly ubiquitous Don Bustos (with considerable support from his colleague Sayrah Namaste of AFSC in New Mexico). Don himself is a successful CSA farmer in the town of Espanola, co-founder and board member of the New Mexico Acequia Association, Board President for the National Immigrant Farming Initiative and recently named the 2011 New Mexico Organic Farmer of the Year. By virtue of its affiliation with the AFSC, the farmer training program is rooted in participatory development strategies and good-old-fashioned community organizing. The results of the project, according to Don, have to be tangible and immediate (food and income) while working towards sustainable ways of protecting land and water and ensuring economic vitality. Three organizations with deep roots in the South Valley communities of Albuquerque were identified as partners: La Plazita Institute, Emerging Communities, and Valle Encantado. Each partner has brought resources to this CFP-funded project – farmer-trainees, land, markets, and passion for cultivating healing alongside food in their historically beleaguered neighborhoods. “Welcome to our little piece of prophecy,” Albino Garcio, Sr., Executive Director of La Plazita Institute, greeted us on our second stop of the South Valley farmer training program tour. There we stood, in the middle of Albquerque, on what is now a multi-use site for La Plazita Institute and the surrounding community but previously a 300-year old farm. When the community approached the La Plazita Director and asked him to take the land that made up the old Sanchez Family Farm in order to keep it from being developed, he agreed but immediately asked AFSC for help in returning it to agricultural production.  Albino, leaning comfortably on a shovel, explained to us:  “I didn’t know much about farming. I’m only used to planting the seeds of wisdom.” Yet, speaking like the wizened leader community members told us he is, he said to our assembled group: “The Great Coyote plays tricks on you. I had no idea that I’d one day be farming and that it would be so integral to our work.” La Plazita Institute is largely about healing by reconnecting people and communities to their culture. La Cultura Cura (the notion that culture heals) is the guiding principal under which the organization governs, conducts, and organizes their work – infusing everything with the elements of traditional culture in the form of symbols, rituals, languages, rites of passage, and values. Albino’s vision for the farm includes providing economic opportunity primarily for young men held in the nearby prison which houses the largest number of incarcerated youth and adults in New Mexico. Young male inmates will be given an opportunity to leave the prison and work on La Plazita’s farm. They will have the opportunity to become farmer trainees if they choose. However, they must do so voluntarily and must be involved in the farm from seed to market, Albino says. They will earn money by working the farm and selling product at the market. Their savings will go into an account that will allow them to help their families on the outside get access to healthy food. As Albino says: “Nothing heals more than getting back to that virtue of providing for and parenting your children – even behind bars.” 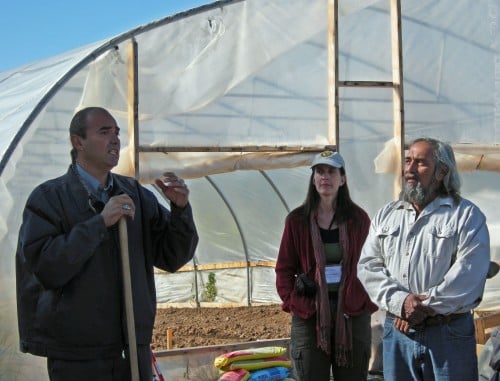 In the span of 2 short years, this CFP project has made significant strides and can boast concrete accomplishments alongside a growing awareness of the need to reform water rights, protect land for sustainable agriculture, and build markets for farmers who are growing good food for communities with insufficient access. The AFSC project has expanded to 16 training sites and will graduate a total of 9 new farmers who will be prepared to train additional farmers as they build their own farm businesses and have the opportunity to access wholesale markets through the unique initiative called the Agri-cultura Network which pools farmers’ product for institutional buyers such as public schools. The program provides at least nine beginning farmers with comprehensive training, farm infrastructure (such as shared equipment and cold frames for winter production), tools, seeds, and the ability to aggregate product in a farmer network. The project has doubled its wholesale and farmers markets and this past year produced approximately 11,000 pounds of food. Don says their rapid success is in part due to their community assets-based approach. They’ve tapped into all kinds of existing but under-utilized resources, such as community-shared water systems (known as acequias), longstanding and reputable community-based organizations, urban land, and institutions such as public schools looking to purchase fresh product. “We’re on to the second phase of this project now,” Don says.

The AFSC team is focusing on reducing the intensive support they’ve provided to the community organizations and farmer trainees by helping them identify other resources such as cooperative extension and available USDA programs. “This is first and foremost an incubation model for community-based economic development and healthy food access,” Don said. “We want to replicate it in another part of New Mexico and along the border with Texas. We also want to begin to engage the larger community in the conversation and the activism.” The AFSC farmer-to- farmer training program is also producing two replication manuals: one for the training program and one for community organizations. And all of the farmers in the network to date have been linked through a food hub model – the Agri-cultura Network — where they aggregate their materials and resources, such as seeds as well as the harvested product for institutional and retail markets. The food hub model is bringing a measure of sustainability to the economic development model at the same time it is binding small farmers together in a community of shared values and collaboration.