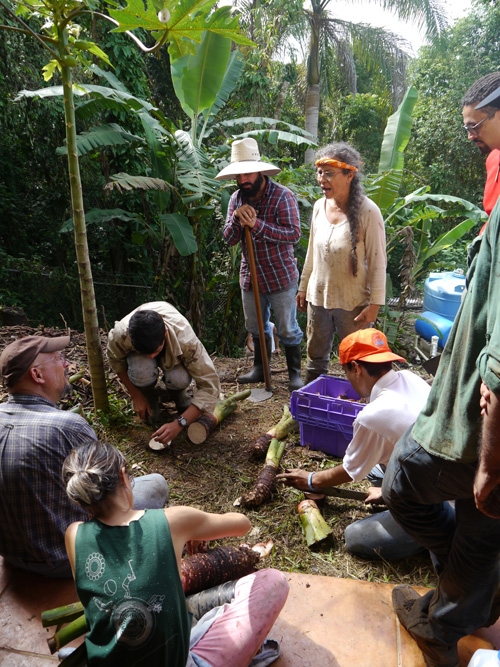 “I feel that that’s the revolution; a just way to live, a way in harmony with not just with the environment—with people, with everything around us because we are nature, we are a part of nature. Agroecology for me represented the most harmonious way to create that way of life.” – Josué Lopez

On November 11th to 13th, social activists and farmers from La Via Campesina member organization Organización Boricuá de Agricultura Ecológica de Puerto Rico, El Proyecto Agroecológico El Josco Bravo, and other activist collectives organized the Campamento Agroecológico de Formación Política [Agroecological Encampment for Political Formation] at the Siembra Tres Vidas farm in the mountainous municipality of Aibonito, located one hour south of San Juan, Puerto Rico. The encampment’s 25-plus participants brought activists and farmers involved in agroecology projects throughout the island, as well as participants in other social struggles, such as the Campamento Contra la Junta and Jornada Se Acabaron Las Promesas. I participated in the three-day encampment as a representative of WhyHunger, to develop our understanding of the current context in Puerto Rico and to learn more about the organizing work happening on the island around agroecology.

The goal of the encampment was to bring people together to work and learn with one another and study agroecology as a tool of struggle within the current political context. The methodology of the encampment consisted of farm work in the mornings, followed by facilitated discussions on topics including the agrarian history of Puerto Rico, agroecology as a tool for social struggle and gender dynamics within social movements. Those facilitated discussions were followed by more informal conversations around a campfire, during which the participants further discussed ideas generated throughout the day. Tasks such as cooking and cleaning were shared among teams of participants during the encampment, and one team also assumed the task of note-taking during discussions. Towards the end of the process, they synthesized the ideas generated into a draft declaration that was then edited and approved by the encampment’s participants.

I had the great privilege to listen and participate in the rich dialogue and debates that took place that weekend. In thinking about how the conversations in the encampment compared to similar conversations I’ve participated in the U.S., I noticed that, similar to the way many conversations and work around food justice, food sovereignty and agroecology are grounded in an analysis of how U.S. historic and structural settler colonialism and racism have shaped and continue to manifest in the food system today, the conversations during the encampment about the need for agroecology were grounded in Puerto Rico’s history and current status as a colony and their own struggles for self-determination and decolonization.

That history begins with the Taíno indigenous people, who cultivated root crops like cassava, sweet potatoes, squash and corn in mounds called conucos. With the brutal colonization of the island of Borinken by the Spanish in the late 15th century, many Taínos fled to the interior of the island as the Spaniards introduced plantation-style agriculture in the lowlands. This form of agriculture was dependent on the labor of enslaved Taínos and Africans to produce crops to export to the Spanish Empire’s metropole. With the acquisition of Puerto Rico by the United States in 1898 following the Spanish-American war, the focus on the production of cash crops (sugar, coffee, tobacco) for export continued, with little support for jibaros/as, the islands peasant farmers who mostly farmed the mountainsides. Following World War II, small-scale agriculture in Puerto Rico declined further. Largely unable to access land and credit, neglected rural populations migrated to the newly industrialized cities in Puerto Rico and the United States in hopes of better opportunities and higher salaries. The introduction of the food stamp program in the 1970s transformed the diets and consumption patterns of Puerto Rican consumers, who began purchasing more imported and processed food at supermarkets rather than from local markets. Today, more than 80% of food consumed on the island is imported.

These processes resulted in the mass exodus from the mountains and the disconnection of many in the subsequent generations from the land and agriculture, and well as the widespread loss of jibaro/a growing techniques and peasant seeds. Luckily, a back-to-the-land movement similar to that of the United States grew in the 70s and young people returned to the mountains to start organic farms. Many of these folks built relationships with the few remaining peasant farmers and learned how to farm Puerto Rico’s tropical mountainsides. Those returning farmers and the jibaros/as they learned from now make up Organización Boricuá’s most senior members. 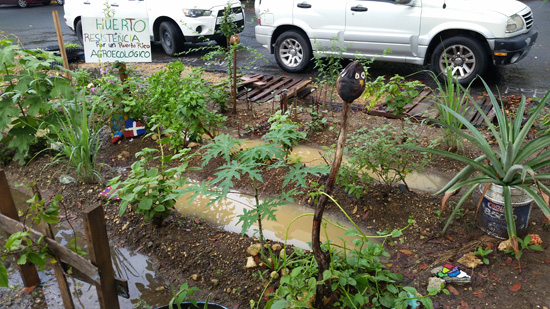 (Photo of the Huerta Resistencia in at the protest camp San Juan against the junta. Among other things you can see okra, basil, lemongrass, oregano and a small papaya tree growing)

At over 25 years old, Organización Boricuá has played a huge role in growing the agroecology movement in Puerto Rico. Through Boricuá’s network, farmers and other supporters of agroecology organize monthly work parties to provide support for farmers across Puerto Rico. Additionally, Boricuá has been able to mobilize in support of campaigns such as resisting Monsanto’s presence in Puerto Rico, as well as the successful fight to prevent the spraying of the Naled insecticide throughout the island in response to Zika. Members of Organización Boricuá promote agroecology through exchanges, events, and trainings, such as the training program offered by El Proyecto Agroecológico El Josco Bravo. A number of encampment participants had gone through that training program and were actively looking to establish farms, yet they encountered many of the same barriers that exist for many beginning farmers in the U.S.; issues with land access, financial barriers, and a lack of support from the government.

One participant, Josué Lopez, had recently started a cooperative farm and hoped his experience would inspire others. He and some friends who had been involved in Puerto Rico’s student strikes in 2010 and 2011 became interested in agroecology as a way to achieve food sovereignty for Puerto Rico, and as new way to live; “I feel that that’s the revolution; a just way to live, a way in harmony with not just with the environment—with people, with everything around us because we are nature, we are a part of nature. Agroecology for me represented the most harmonious way to create that way of life.” Josué and his friends, who didn’t have much money, pooled their resources and purchased some land to start a farm; “it’s a difficult landscape, but that gives us inspiration, you know? Because it’s what we can do . . . the perfect conditions will maybe never arrive, and if we sit around waiting for the perfect conditions to build our revolution, I think it will never happen. We create the conditions. And if we can give this example of working that land and living there and making an agroecological project that teaches in those conditions, no one has any excuses.”

The farm was created for the participants personal consumption and to sell surplus to meet their living costs, but Josué was clear to point out that their “vision isn’t necessarily to generate more money than conventional agriculture, but to allow us to require less money in order to live . . . we know we don’t control this monetary system, we know we don’t control this economic system, and if we are totally dependent on this economic system we will always remain enslaved.”

Josué offers a good example of the connections between those involved in the agroecology movement with other social struggles in Puerto Rico.

Like Josué, many of the encampment’s participants had been active in the student strikes of 2010 and 2011 and developed their radical politics through that process. Additionally, many participants in the encampment were also involved in the current protest movements against the PROMESA bill and the federally-appointed fiscal control board (colloquially known as la junta), which has been granted the authority to unilaterally restructure Puerto Rico’s finances in the wake of the debt crisis. Given the recent developments regarding the PROMESA bill, I was expecting the current debt crisis to be a central theme of the discussions. However, I came to understand that to many of the participants, the junta was not understood as a completely new situation for Puerto Rico, but merely a more explicit manifestation of Puerto Rico’s colonial status and the continuation of the process of colonization that began over 500 years ago. This analysis was evident when I returned to San Juan and visited the protest camp against the PROMESA bill and the junta in front of the federal court building. Signs, banners, and messages painted on the sidewalk presented their current struggle against the junta within a global narrative of colonialism and anti-colonial struggle. The messages connected the fight for a self-determining Puerto Rico to current struggles against police violence against black, brown, and indigenous people, to the fight of the Standing Rock Sioux and its allies against the Dakota Access Pipeline. In the middle of the camp across the street from the federal court building, protestors had cleared a strip of land in the sidewalk and created a small garden, where they were growing herbs, vegetables and fruit with a sign reading ‘Resistance Garden: for an agroecological Puerto Rico.”

The conversations of the encampment also reflected upon the internal dynamics of the agroecology and other movements. Conversations around the campfire addressed the need for focused outreach to groups whose voices needed to be a part of discussions around agroecology and food sovereignty. Additionally, during discussion on gender and patriarchy, the participants agreed that the participation and contributions of women and non-binary folks to social movements—the agroecology movement included—needed to gain more visibility. During the self-critical conversations of the agroecology movement, many positive attributes were discussed. Magha Garcia of Bosque Jardín Pachamama, made the observation that the agroecological movement in Puerto Rico is the only place she’s seen multiple generations organizing together; “I started as an activist in 1980, 81, and it was always either the young folks or the older folks, each one in their batey [a Taíno word for a gathering or meeting place] as we say in Puerto Rico.” Magha explained that the agroecology movement has produced a historic moment for social struggles in Puerto Rico where she’s seen “two and three generations all sitting and sharing and that has allowed us in some way to draw this social continuum . . . in that sense, now we are sharing the same batey.” 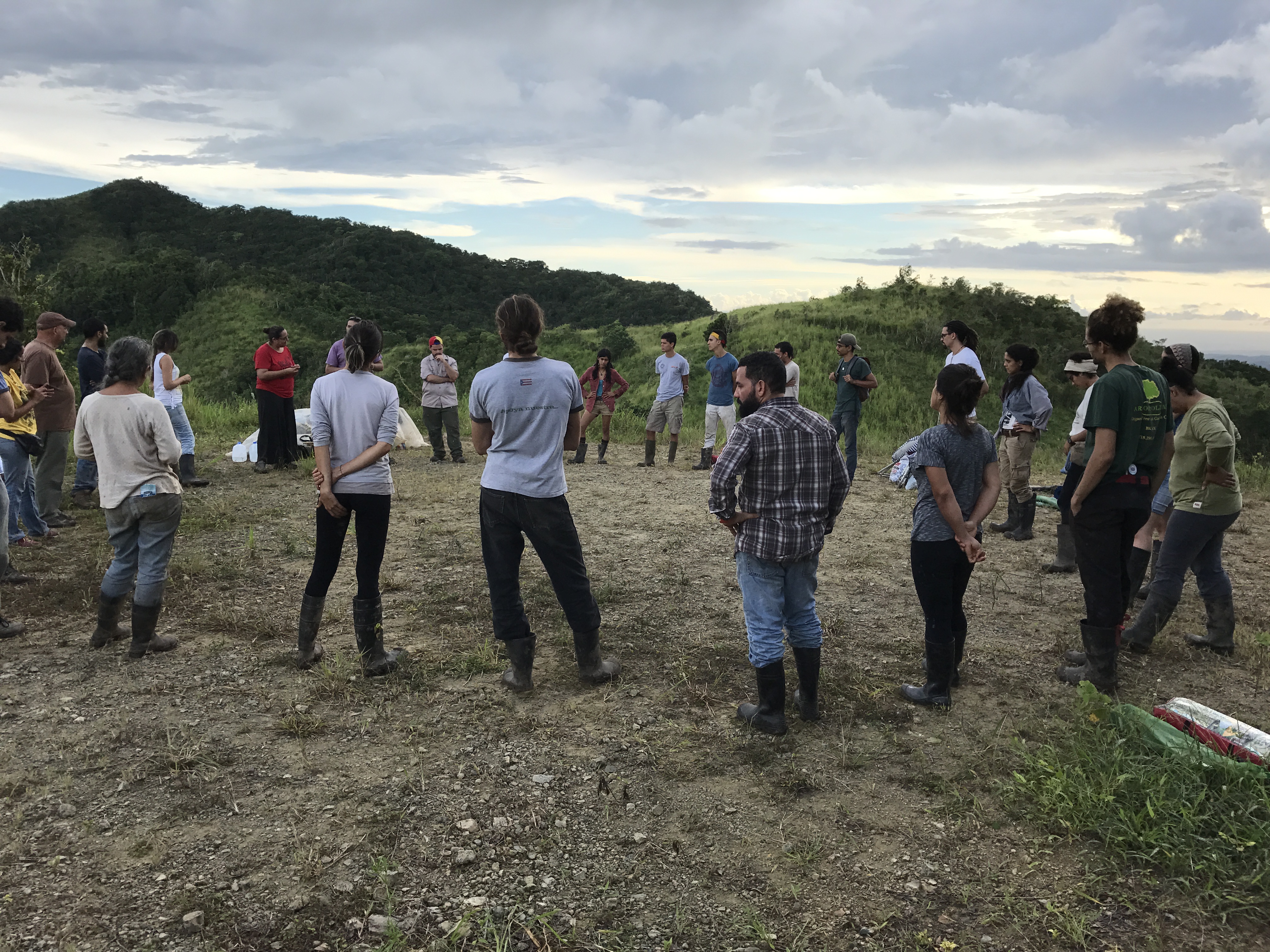 Though the encampment was short, the mixture of group farm work with thoughtful discussions, reflection, delicious shared meals and laughter, created the conditions for the kind political education and relationship-building necessary for developing strong social movements. The encampment left participants (myself included) feeling inspired and renewed, and with a collective statement outlining a shared analysis and steps forward for Puerto Rico’s agroecology movement. In times like this when strong social movements are greatly needed, meaningful processes like Organización Boricuá’s Agroecology Encampment for Political Formation are essential for building and sharing the practice and politics of agroecology as well as building bridges to other social movements.