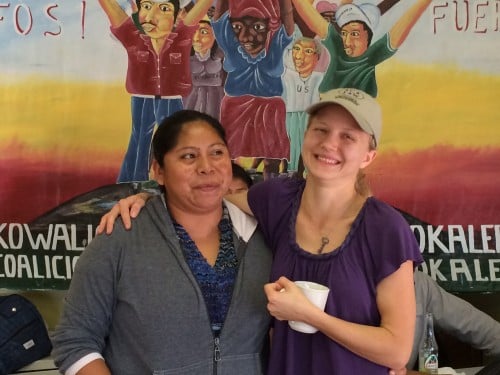 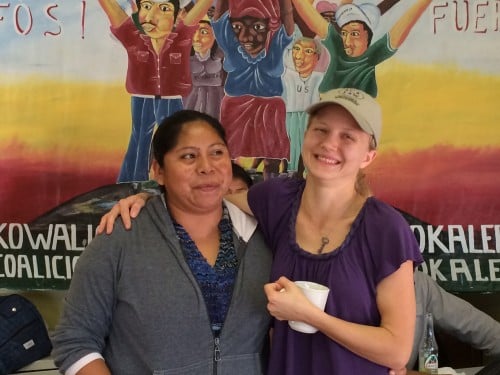 At five in the morning in Immokalee, Florida, the air is crisp, the sky is dark and the streets are humming. Roosters crow, bikes zip around, and parents carry their sleeping children wrapped in blankets off to day care, a personal cooler in one hand and a child’s backpack slung over the shoulder. It’s the beginning of another long day in Immokalee for migrant workers and their families. Soon the sun will be directly overhead and workers will be in the tomato fields harvesting thousands of green tomatoes that will be shipped around the country, purchased and processed by the food industry giants. Millions of Americans every day will eat the tomatoes initially handled by these workers, chopped up in their Taco Bell burrito or sliced on their McDonald’s hamburger.

Everyday life is a struggle for these 30,000+ workers who migrate to Immokalee from communities in the Global South including Mexico, Guatemala and Haiti for a singular purpose: to make a better life for themselves and their families. But it is a “new day” and there is a brighter future in these fields thanks to the Coalition of Immokalee Workers (CIW), an organization founded and run by the workers themselves to put an end to the indignity, abuse, sexual harassment and wage theft experienced in the unregulated, 600 million-dollar Florida tomato industry. The strides this community-based, worker-led organization has made in the last two decades have resulted in increased pay and enforcement of basic labor standards in the fields, culminating in their international recognition as one of the most innovative and successful human rights organizations in the country. After years of trying to make change by directly targeting the Florida tomato growers who hired and supervised the workers, the CIW turned its focus instead to the corporations who buy the tomatoes–and whose business model is only as good as the public perception of their brand. Within a decade, public pressure organized by the CIW has brought eleven of the world’s billion dollar food corporations to the table to formally join the Fair Food Program, committing to leverage their purchasing power to hold the growers accountable for their treatment of workers in exchange for absorbing some of the costs of a penny-per-pound increase in farmworker wages.

Brooke Smith, Director of WhyHunger’s Grassroots Action Network, and I were hosted for two days in Immokalee last month by CIW members and staff. WhyHunger has been privileged to support CIW for the past decade in a variety of ways – participating in actions and helping to amplify CIW’s voice and stories as well as connecting them with resources. As we have sharpened our understanding of what it means to be a grassroots support organization, our commitment to accompanying grassroots-led efforts to transform communities has deepened. WhyHunger’s programs are shifting in new and exciting ways as we shift our frame towards the practice of allyship. This two-day encounter with CIW on their home turf was an opportunity for us to listen, learn and reflect, to ask our CIW partners and ourselves: What does it mean to be in solidarity? What does it look like and how does it, in practice, shift systems so deeply rooted in wealth accumulation and competition towards systems that become rooted in a collective moral center – systems that, in this case, are still market-based but are also held accountable to a large organized consumer base that shares the values of worker dignity and fair pay? 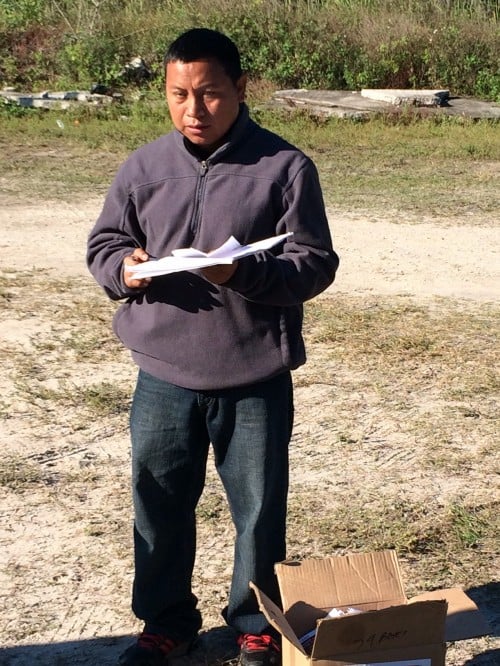 Paradox abounds in Immokalee. Not only in a robust and proven strategy that brings corporations with arguably cutthroat business practices to the table to sign an agreement for fair food; but also in the juxtaposition of stories of hope for a dignified life with those of deep inequity and loss. Huddled in the dark on a bench on the front porch of the CIW community center witnessing the 5 a.m. hustle and bustle in the parking lot across the street, we listened as CIW member Santiago Perez, a farmworker originally from Guatemala, described the scene we were witnessing and the changes the workers have implemented to create greater job security. That afternoon, Oscar Otzoy, another farmworker and CIW leader, took us on a walking tour of the trailer camps where the majority of the farm workers find housing when they first arrive in Immokalee.

While in some cases conditions have improved over the past decade, there are still 10+ men living in each small, dilapidated trailer, sharing one bathroom and a hot pot for cooking. Ownership of the trailer camps and farmworker housing in Immokalee is concentrated in the hands of just a couple of landlords, and housing prices exceed that of New York City. And yet when Oscar walked us past the former site where workers were forcibly entrapped and trafficked up and down the east coast before their captors were brought to justice, we were reminded of the enormous strides made by the CIW’s anti-slavery campaign. 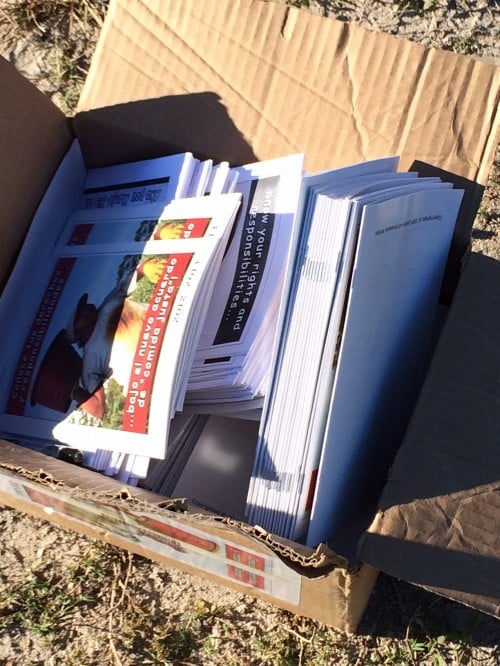 Accompanying CIW co-founder Lucas Benitez to the tomato fields to take part in worker-to-worker educational sessions as a part of the heralded Fair Food Program, we witnessed the fulfillment of human rights in action. It is a mark of the previously inconceivable accomplishments of the CIW’s campaign to bring modern standards and transparency to the agriculture industry that Lucas and his colleagues Guadalupe Gonzalo and Oscar Otzoy were greeted warmly by the farm manager as they waited for the 100+ workers to arrive on the bus. The workers gathered for about 30 minutes while the CIW led a session on the rights and responsibilities of both the workers and the growers under the Fair Food Program. In the background, tractors hauled fresh drinking water and shade structures, placing them in the fields for ease of access by workers. It was 8 a.m. and the sun was already beginning to climb. The workers – women and men, young and old – left the motivating education session and headed to the fields for some of the most physically demanding work imaginable to put food on our tables. 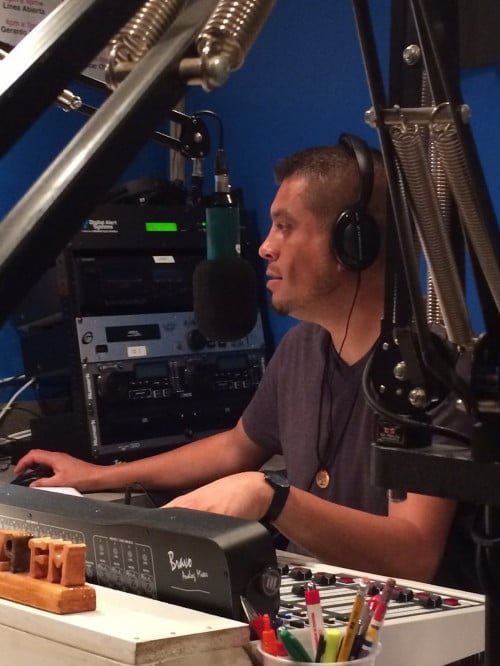 Our visit to Immokalee coincided with the International Day of the Migrant. On our last night, a group of thirty or more men and women came together at the CIW headquarters for their regular Wednesday night community gathering. CIW member and worker Gerardo Reyes-Chavez led the farmworkers in dialogue about their reasons for migrating to Immokalee and their experience as farmworkers. Each person who spoke told a story of hope and loss: hope that steady work in the tomato fields would result in remittances for their families back home and savings towards a small plot of land to farm, a house or school fees; and the loss of a wife, children, parents, a community and a beloved culture left behind out of economic necessity.

A farmworker’s life is marked by struggle and strain, both physical and emotional. And while there is art and music in the CIW’s expression of the struggle, and joy in their celebration of triumphs, there is also frustration and deep loss in the farmworkers’ personal stories. The act of solidarity and the expression of allyship can also be discordant and complex – to understand that the farmworkers’ struggle is not external to me or my hopes for a more just world even while I have never labored in the fields or left my family behind for the necessity and promise of opportunity elsewhere. The act of grassroots support is not always about doing something; listening and walking alongside each other in the struggle is sometimes the most difficult but the most important action to take as an ally. It’s a tall order and one that, as an organization, WhyHunger is committed to learning and practicing alongside partners like the Coalition of Immokalee Workers.