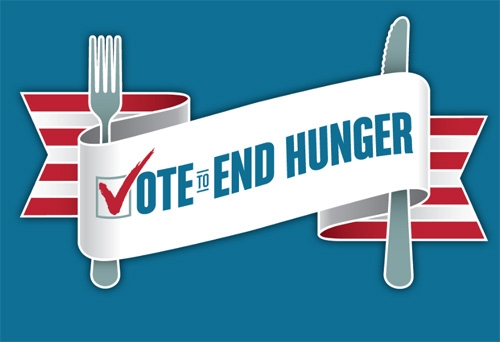 How can the richest country in the history of the world that has an abundance of food have so many hungry people? Who are they? How can we change this grave injustice?

Even after a substantial recovery from the Great Recession we still have 48 million people in our country who are food insecure including 15 million children and 5.4 million seniors. That does not mean they are starving but they often skip meals and are forced to buy cheap unhealthy food. The majority of the adults who are hungry work but cannot afford to feed their families. There are also a million homeless people facing hunger including an increasing number of families with children.

There is a growing movement among hunger/poverty advocates, faith based organizations of all denominations, small farmers, environmental activists, labor unions and businesses to vote for candidates for the presidency and other national, state and local officials who support efforts to end hunger, alleviate poverty and create opportunity in the U.S. and around the world.

These are topics that often are lost in the furor of personal attacks and rarely become major issues in presidential and other important elections. Yet in poll after poll, a large majority of Americans say we should and can end hunger in America. Many of these folks support an emergency food program in their neighborhood but after more than forty years with tens of thousands of local food pantries and soup kitchens it has become clear that simply feeding people is not the answer to hunger.

WhyHunger is joining hundreds of organizations and individuals in the Vote to End Hunger Coalition to elevate the issue of hunger with the Presidential candidates during the 2016 election. Consider signing this petition to make hunger, poverty and opportunity a higher political priority and ensure the debate moderators ask the candidates, “If elected, what will you do to end hunger, alleviate poverty, and create opportunity in the US and worldwide?” during the upcoming presidential debates.

We certainly need to ask the candidates whether they support the already successful federal anti -hunger programs such as the Supplemental Nutrition Assistance Program ( SNAP) that has successfully replaced Food Stamps and all the child nutrition programs. But, what about dealing with poverty, the root cause of hunger? Do they support raising the minimum wage to $15 an hour over the next five or so years? Do they support equal pay for equal work for women? What about pay raises for those who are not covered by minimum wage laws like farmworkers? How about supporting paid leave to take care of a newborn child or an elderly parent? Are they in favor of making it easier for workers to join a union? Are they on board to form a bi-partisan congressional effort to fund a massive Infrastructure/Jobs program?