WhyHunger congratulates our friends at the Coalition of Immokalee Workers for inspiring Walmart to join, strengthen, and expand its Fair Food Program, “the recognized gold standard for the protection of human rights in the US produce industry today.” With Walmart’s participation, over thirty thousand farmworkers will benefit, through extra pay or through improved working conditions and increased respect and dignity in the fields, raising standards for farmworkers throughout Florida. 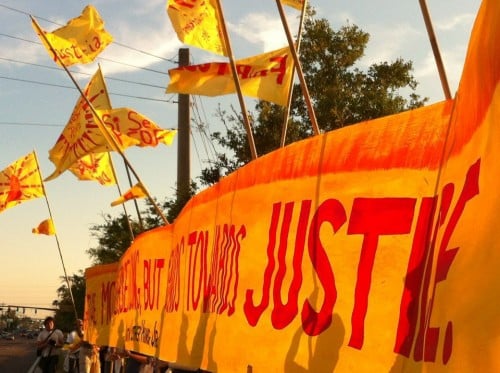 Banners at the CIW March for Rights, Respect and Fair Food in Florida last March. “The arc of the moral universe is long, but it bends towards justice.”

Bringing Walmart–the largest retailer in the world–onboard should also increase pressure on the agriculture retail industry and lead additional supermarket chains to join the Fair Food Program, making better wages and basic work protections the norm rather than the exception. In particular, Walmart’s joining onto the Fair Food Program gives Publix, the largest supermarket in the South, no excuse not to step up and join as well.

However, the struggle for worker justice is not over simply because Walmart has joined the Fair Food Program.

In fact, stories about Walmart and workers are nearly always about Walmart squeezing wages and busting union activity; it is more than unusual to hear about Walmart taking the side of workers in a dispute about economic justice, it is unheard of. In fact, just last week, the National Labor Relations Board charged that Walmart violated the rights of workers who had tried to get higher wages on Black Friday. Just before Thanksgiving, one Walmart store made the news because it held a canned food drive for its own employees. Even Walmart’s support for “local and organic” food has been controversial, as it is unclear whether small farmers will benefit or suffer as a result of becoming part of Walmart’s supply chain.

As a press release from OUR Walmart and numerous other groups says, Walmart’s sign-on to CIW’s Fair Food Program is a “win for workers,” but Walmart still needs to “improve wages and treatment of workers” throughout the supply chain, in its warehouses and in its stores.

As we celebrate CIW’s victory with Walmart, we know that the company will have to do much more to be seen as a champion of worker rights. We hope that by participating in the Fair Food Campaign, Walmart will live up to the expectation of workers and consumers that living wages and human rights are the only way to end poverty and hunger.