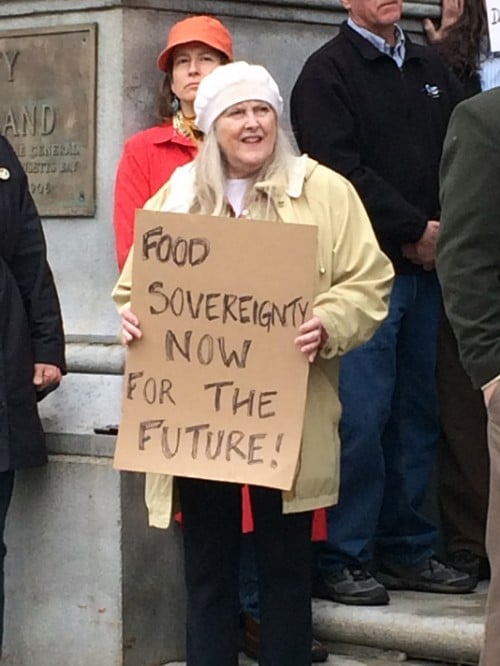 Maine is the first state to pass local ordinances in favor of food sovereignty, or the right of communities to determine how their food is grown, processed and distributed.

In May, WhyHunger staff stood in solidarity with small farmers as they held a press conference in Portland, Maine, on the day of an appeals hearing in the State of Maine’s lawsuit against farmer Dan Brown. In 2011, the Maine Commissioner of Agriculture successfully called for the State to sue farmer Dan Brown for allegedly selling unpasteurized milk without the proper license and labeling. The judge who sat the case agreed that Farmer Brown was in violation of state laws and ordered him to pay a fine. On June 17, Farmer Brown lost his appeal, a devastating but not final blow to the struggle for food sovereignty in Maine.

Maine is the first state to pass local food sovereignty ordinances to protect local-farmer-to-local-community supply chains. State and federal laws and licensing are too costly for small farmers who only sell locally and have, in part, led to the rapid decline over the past few decades in small- and medium-scale farmers and the rising age of the average farmer in the United States. Small farmers around the country believe that the direct relationships they have with their customers (who are also their neighbors) is the most effective form of product liability they can offer.

In a recent correspondence with WhyHunger, Heather Retberg of Quill’s End Farm, a 100-acre farm in Penobscot, Maine, tells us that the ruling on June 17 has “galvanized support, and a number of people from western and central Maine are checking in to register their commitment to food sovereignty and their hope to pass the ordinance in more towns if the state and courts refuse to understand the importance of preserving our traditional food ways, customs and cultural heritage, food freedom, local economy, vibrancy and resilience.”

Read Heather’s moving remarks on the day of the press conference on the Food for Maine’s Future website.

Watch this brief video of G.W. Martin, a family farmer from Montville, ME, explaining the constitutional roots of “sovereignty” at the press conference:

Maine’s small-scale farmers and local consumers are standing together against the ruling. Here are a few remarks from around the state:

“I want you to know that, as a person who cares so deeply about our food sovereignty but is a bit on the sidelines of the movement, I am totally committed to pushing forward with the food sovereignty ordinances as a strategic organizing tool. If these ordinances keep getting passed, despite the state ruling, it is a growing movement of people willing to take the first step against this unjust legal system. It is more people on board who are educated to perhaps take the next step of direct action, if it is needed to ensure our food sovereignty.” – Chris in central Maine

“I personally find the food sovereignty ordinances a beautiful way to fight FOR SOMETHING, promoting all of the health, vibrancy and community that is built around food; while simultaneously working to protect those very things from industrial threats.” – Meg in Maine

“I think we need to pass the ordinance all over this state so the Maine legislature will see fit to pass laws that reflect what we the people want.” – Susie in western Maine 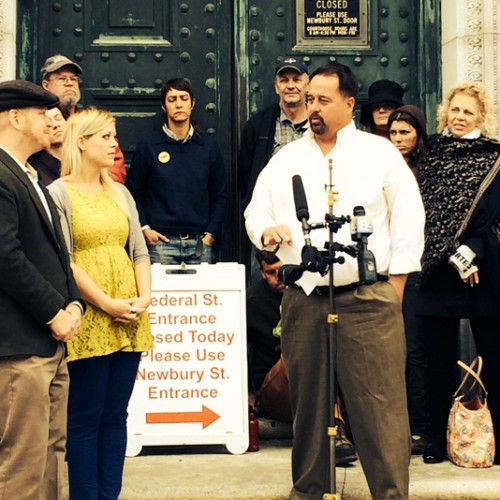 Farmer Dan Brown, speaking at a press conference before heading into the appeals hearing. 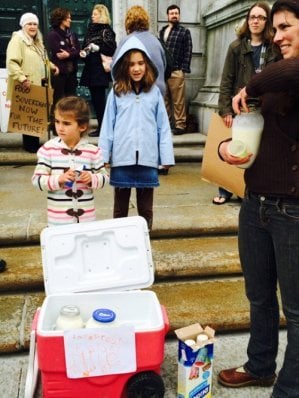 A farmer gives away samples of her family’s unpasteurized milk on the steps of the State Supreme Court in solidarity with farmer Dan Brown. 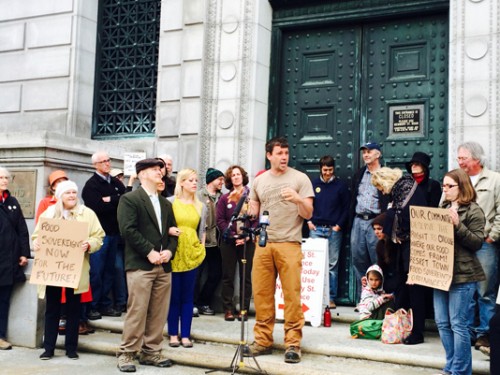 “We are all Farmer Brown.” Farmers and customers speak out in support of protecting the direct relationships between farmers and their local customers.