Fight for farmworkers’ rights by attending 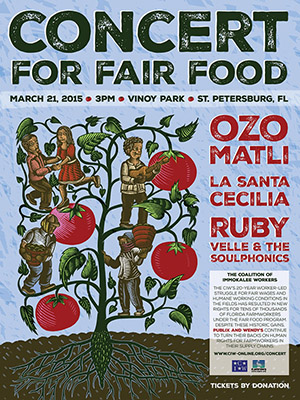 CIW’s Concert & Parade for Fair Food on Saturday, March 21st in St. Petersburg, Florida. Like many of history’s most powerful grassroots movements for change, the movement for Fair Food has been driven by art and music. Theater, music, murals, and puppets rooted in the diverse cultural traditions of the Fair Food Nation have always brought its message to life while art animates the struggles farmworkers face in the fields and articulates their demand to work with dignity.

Following the Parade, farmworkers will gather with thousands of allies, including WhyHunger, from across the U.S. for the first-ever Concert for Fair Food featuring Grammy-winning artists Ozomatli, La Santa Cecilia and more, to harness the power of music to spark the consciousness of consumers and amplify the call for farm labor justice.

Watch this video of Ozomatli’s concert invitation and register for the event today! If unable to attend, consider giving a donation in support.