Uyolanda Dickerson was born in Illinois; she is a mother of a 3-year-old daughter and cares for her disabled niece. Uyolanda worked at a Walmart warehouse outside Chicago from 2009 to 2010, where she loaded and unloaded trailers for four to 12 hours. 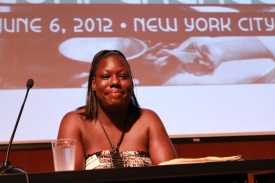 Two years in the warehouse industry as a loader/unloader/verifier, Joliet, IL

Uyolanda Dickerson was born in Illinois.  She is a mother of a 3-year-old daughter and cares for her disabled niece. Uyolanda worked at a Walmart warehouse outside Chicago from 2009 to 2010.  At the warehouse, she loaded and unloaded trailers and verified items on the trailer. Depending on the workload, she worked anywhere from four to twelve hours a day on the first shift. Working at the warehouse, she was paid according to how many items were on the truck, but “I never made more than $200 a week,” she says.

While working at the Walmart warehouse, which was managed by a logistics contractor, Uyolanda says she was discriminated against for being a woman. The men at the warehouse made comments like, “Did you break a nail?” and “Are you going to cry because the box fell on you?” She also believes that she was paid less than men were and purposely given a heavy workload, to try to prove that she couldn’t handle it. She suffered sexual harassment on a daily basis. Her male co-workers would call her “hot momma” and make comments about her body. On one occasion, she was locked in a trailer with a male co-worker who described what he was going to do to her and made sexual advances. When she reported the incident to management, Uyolanda reports, “they said, ‘Stop being soft, you’re just being a girl. I didn’t see anything, so I can’t do anything about it.’”

“I went to work sick a lot,” she says because her bosses told her “if you don’t come, you have no job.” Towards the end of her employment, she purchased health insurance, paying $27 a week for it. At work, Uyolanda suffered from back pain, leg pain and shoulder pain; when she requested to take time off, management refused. Uyolanda was also restricted from going to the bathroom – and stopped going altogether when she realized co-workers would try to spy on her. She says “because I couldn’t go to the bathroom, I got a really bad bladder infection.”

After a while, Uyolanda couldn’t take the harassment any longer and left the job. She began organizing with Warehouse Workers for Justice (WWJ). She says that she wants to “let [other workers] know [there] are people out there like you and that you aren’t alone.” Uyolanda is now the head organizer of the steering committee of the WWJ workers committee and is on the women’s committee. She says, “Everything I went through at the warehouse made me want to tell others about their rights so that they could do something about it. I also want to better my community.”