To end hunger, we need to tackle entrenched structural barriers such as communities’ rights to land, water and seeds.

Social movements – mass, popular organizations led by communities directly affected by hunger and short-sighted policies – are the critical actors to bring about the structural changes required to advance towards a society that protects and supports the right of all people to live with dignity. It is the social movements led by peasant farmers, indigenous people, and women who developed the concepts and practices of Food Sovereignty and Agroecology which are the critical pathways for all people to have self-determination over food, agriculture and local economies such that they can provide for their families.

Social movements can form at the regional, national or global level and are community-led coordinated efforts with a broad base of actors. They are necessarily and ever-evolving as external barriers and obstacles shift and emerge. They challenge social, oppressive structures present in society through organizing actions while at the same time building solutions to those problems. Their vision for a new path to society is borne out of democratic values and an analysis of what defines the current political, social and economic realities. They are political in that they seek social change. They are the wisdom and the voice of organized sectors of society. In other words, social movements as an ideal type are the truest representation of real democracy. 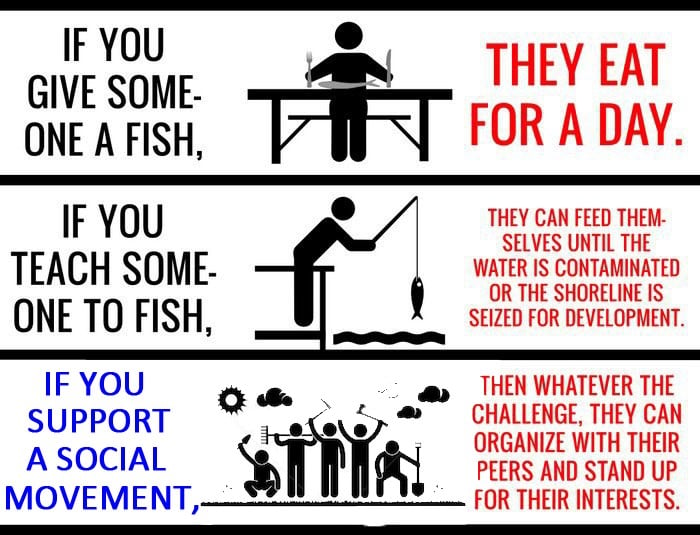 WhyHunger sees Food Sovereignty and Agroecology, together, as the path to “feed and cool the planet.” These two concepts were carved out of the struggle and knowledge of landless peasants and indigenous people. Food Sovereignty is the right of communities to produce food and decide their own food policies, and Agroecology is the traditional and indigenous knowledge and practice of food production and community organization that is both ecological and just. According to La Via Campesina, the origins of Agroecology and Food Sovereignty “lie in the accumulated knowledge and wisdom of rural peoples, organized as in a dialogue.” This process of generating and accumulating collective wisdom through dialogue is the practice that social movements use to articulate their vision, analysis, as well as their solutions and actions.

WhyHunger’s strategic approach to supporting existing social movements for food sovereignty is rooted in a process of contextual analysis, or the search to understand the ever-evolving social, economic, environmental, political realities within which communities of people live. Contextual analysis relies on the experiential truths of individuals and communities, and it always takes into account the “position” or “perspective” of the one who is articulating the analysis. The reality or context of a peasant in the Philippines is very different from staff at a non-profit organization in the US.

Contextual analysis also does not just explain a worldview and its purpose is not just to outline a current situation. It is a method of understanding lived reality through dialogue that actually generates new ideas and solutions to real problems. This is the process that rural and urban social movements have utilized to develop agroecological practices that are benefiting hundreds of thousands of families worldwide, and the concept of Food Sovereignty is being continually developed through contextual analysis in communities around the world. Contextual analysis serves as a tool to understand multiple realities and develop nuanced strategies accordingly in a fast-paced, changing world.

As we work with social movements, it is important that we learn and build together. By supporting and accompanying social movements for food justice, food sovereignty and agroecology, we seek to contribute to a multi-layered impact on communities that is larger than any impact we could have alone. This impact is realized through individuals’ transformation and growth, stronger links of solidarity and compassion between people (stronger communities), and the growth a grassroots-led effort capable of transforming people, policies and social structures for the common good.For WhyHunger, contextual analysis enriches our political education and our capacity to accompany social movements. As a grassroots support organization in the United States, WhyHunger applies these methods of collective learning and analysis to build long-term alliances, contribute effectively to the work of allies, and have a greater and more profound impact.

WhyHunger mobilizes resources to create opportunities for international solidarity between grassroots organizations in the US and Global South through learning exchanges and direct support to initiatives led by social movements. Learning exchanges strengthen grassroots organizations and both rural and urban communities’ initiatives to achieve the right to food and food sovereignty. Small grants through WhyHunger’s International Solidarity Fund contribute to critical areas for social movements such as grassroots organizing, political education and alliance building. WhyHunger also works to amplify the voices of our allies in spaces where US agriculture and food related policies are being discussed and that have a direct impact on the lives of communities in Global South. WhyHunger joins US allies in different networks dedicated to food sovereignty and agroecology such as the US Food Sovereignty Alliance (USFSA).