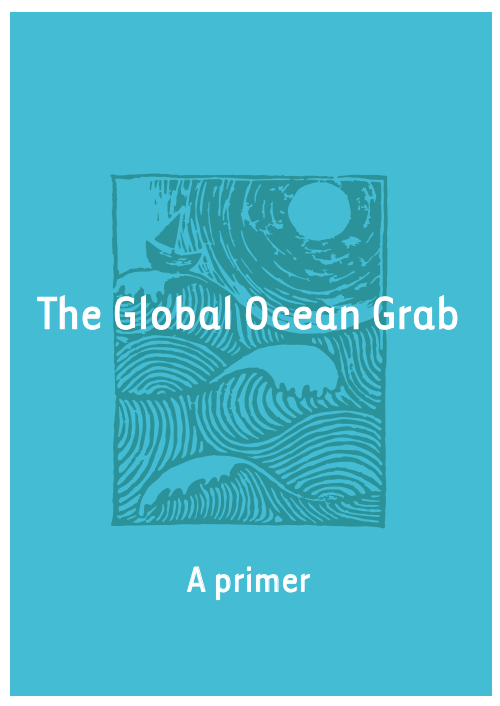 After the financial crisis of 2008, farmland around the world – but particularly in the developing world, where it was cheaper and easier to buy – was seen as a new investment and asset class for hedge funds, banks and other large investors. Since then, global agricultural land greater than the size of France (a figure which is now a few years old and may be significantly greater) was transferred from small-scale peasant farmers growing food for their families and communities to large-scale plantations growing crops for export. Millions of families have been impacted.

The new report from the World Forum of Fisher Peoples (WFFP), The Global Ocean Grab: A Primer, shows that the same process is playing out in the oceans and the fisheries of the world, but disproportionately impacting developing countries.

While no one “owns” the oceans or the seas, governments do manage them, and the World Bank along with corporations and foundations are pushing governments to privatize access to fisheries. Access to fisheries increasingly requires that fishermen own a “right” to the fishery, which then comes with a limit to how much that fisher can catch. Moreover, those “rights” have a price tag, and fishers are allowed to sell their “rights” if fishing is no longer profitable for them. In many fisheries in the U.S. and around the world, you don’t have to be a fisher or own a boat to buy these “rights,” also called “quota” or “catch shares.” You can be an armchair investor or a corporation.

The introduction of these management schemes – “rights-based fishing,” catch shares, or individual fishing quotas (IFQs) – has led to the concentration of fisheries by conglomerates around the world, displacing small-scale fishers and introducing industrial-scale boats. And it is not just seafood companies displacing fishers. Just like with farmland, banks and investors are getting involved. Lion Capital, a British private equity firm, now owns “the rights to 23 percent of the clams that dominate America’s canned clam industry, almost a quarter of the national supply for clam sauce, clam juice, clam soup, anything with clams.”

With corporate concentration comes economies of scale and cheaper and cheaper seafood, often with loss of quality and nutrition. And as the price of fish and seafood drops, small-scale fishers and food producers are unable to meet their cost of production and are forced to sell their rights to fish, fueling a spiraling concentration process.

But, perhaps most importantly, these industrial-scale boats do incredible damage to fisheries and to the oceans. Bottom trawlers rake the ocean floor, destroying fisheries for generations, and other kinds of gear catch the wrong species of fish or fish that are too young to be caught, further destabilizing and upsetting fish populations. Ironically, these management schemes, which were supposed to protect the oceans and the fish, are fueling their destruction.

Rights-based fishing and all privatization schemes are based on the theory known as the “tragedy of the commons.” The thinking goes that if people have a resource in common, then individual users will feel little responsibility for it, assuming that someone else should take care of the resource, which leads to those individuals eventually using up and depleting that resource – hence the “tragedy.” This theory flies in the face of Nobel-prize winning economics research by Elinor Ostrom , who found that communities manage resources best, through many different collective processes, but always because of their mutual respect and care for their common resources.

With the rise of land and now ocean grabbing threatening millions of small-scale food producers and the hundreds of thousands of communities that depend on them, it is time to change and re-think the approach to, access to, control over, and management of our natural resources in the food system.

To read the full report, go to The Global Ocean Grab: A Primer.