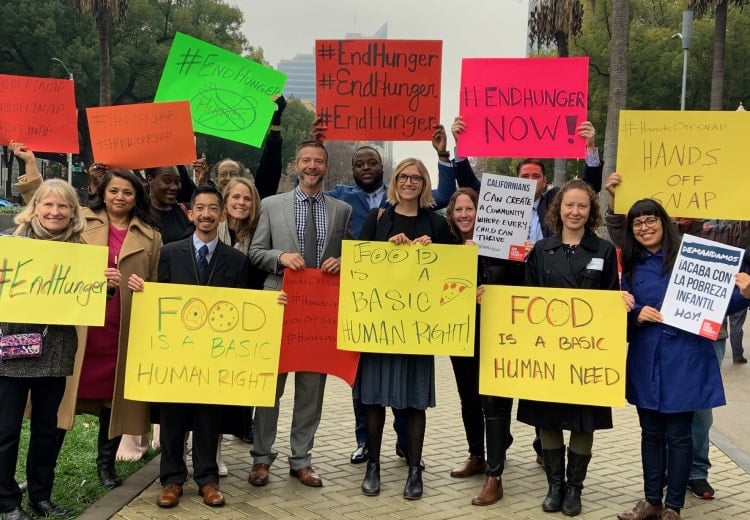 When employees at a San Francisco food bank had exhausted all options to fix a toxic work environment, unionizing changed everything. Unions are often misunderstood or even thought to be a thing of the past, but today, workers in high profile companies and non-profits across the country are organizing more than ever. From Amazon to Starbucks, workers are feeling unheard and are esponding by coming together to organize and take action. This was the case at the San Francisco Marin Food Bank.

Last month, Closing the Hunger Gap’s Next Shift hosted a public panel on this topic featuring guests Emily Citraro and Marchon Tatmon from the San Francisco Marin Food Bank and Nati Kahsay, an organizer at OPEIU (Office and Professional Employees International Union). The discussion was facilitated by Alison Cohen, a collaborator in the Next Shift campaign and WhyHunger’s Senior Director of Communications, Debbie DePoala. Listeners around the country tuned in to hear the emotional story of how the workers at this food bank found great success in forming a union on their path towards economic justice and worker rights!

The San Francisco Marin Food Bank has been working to end hunger in the Bay area for over 30 years, employing over 270 staff to provide food to 140,000 people each week. However, things were not always copesetic for the workers. Prior to unionizing, workplace morale was at an all-time low. There was quick employee turnover and poor communication from upper management. The food bank’s own workers were forced to turn to pantries to feed their families because they were not paid a fair wage. “You’d walk by people’s desks and see tears streaming down their faces. Who could work in that environment?” said Emily Citraro. Suggestions for improvement were brushed off by leadership. “People didn’t feel they could voice concerns,” Tatmon said.

After hearing how dreadful the work environment was, Nati Kahsay deeply empathized with the workers and cried alongside them. “It was unbearable to hear what was going on,” he said. Throughout the organizing process, he served as the workers’ voice and did everything in his power to ensure the campaign did not fail. An unhappy staff cannot effectively serve their community. Nati continues, “the only way we can counter that is by allowing food bank workers across the country to advocate for themselves.” The workers alongside Nati utilized educational, non-confrontational methods of communication to help navigate the road of conversations leading up to unionizing.

In 2019, 78 percent of the eligible staff at the San Francisco Marin Food Bank voted in favor of forming a union, making it one of the first food banks in the country to unionize. A floating holiday, three percent annual increase and an equity pay rate are just some of the various positive additions negotiated into their union contract. It’s about “empowering your employees and to support them in whatever form necessary to do their job,” said Tatmon.

Unionizing helped establish consistency and provided a space where employees had a voice. “We created a pro-union work environment. Now who wouldn’t like that?” he said.

In this country, being overworked and undercompensated is sadly too common. Emily Citraro stressed that those serving in the non-profit sector should never feel pressured to suffer in order to prioritize their work. “The work is important, but you’re important too,” she said.  Kahsay urges workers with an unhealthy work environment to stand their ground and organize, stating that “the biggest barrier to organizing in the non-profit space is fear.” Stigmas surrounding unions such as additional costs or ruining the manager-employee relationship are untrue and often discourage workers from joining a union. “It benefits your organization, your community, and your personal well-being,” Kahsay said. Forming a union may not always be the answer, but for this food bank, it was a lasting solution.

Download and view the full webinar here:  A Voice for All: Should Workers in Anti-Hunger and Hunger Relief Organizations Unionize?