There are few things meant to be as fundamentally universal, as natural and unwavering as human rights. Here in the U.S. we hold these basic, inalienable rights at our core. We’ve used a framework of rights to found a nation, to build our political systems and to develop a shared narrative of what makes us uniquely American. Yet, when we begin to dissect what is meant by human rights in the policies and practices in place in the United States today, we find that access to certain basic needs – nutritious food and clean water – is treated as a privilege, unevenly available among certain demographics. What is possible if the U.S. acknowledged the basic, essential human right to food? Could we reframe the conversation or even end hunger in America?

At the World Social Forum, held last month in Montreal and attended by tens of thousands of activists, organizations and social movements, WhyHunger and La Via Campesina co-organized a round table discussion on the meaning and potential opportunities to use the right to food framework in the U.S. to name and then address hunger as an injustice.

To kick off the conversation, panelist Smita Narula, human rights practitioner, academic and expert advisor in the field of international human rights and public policy, laid out the concepts behind a right to food framework and how it could be used in the U.S. Narula stated, “The right to food is the right of all people to be free from hunger and to have physical and economic access at all times to sufficient, nutritious and culturally acceptable food that is produced sustainably, preserving access to food for future generations.” 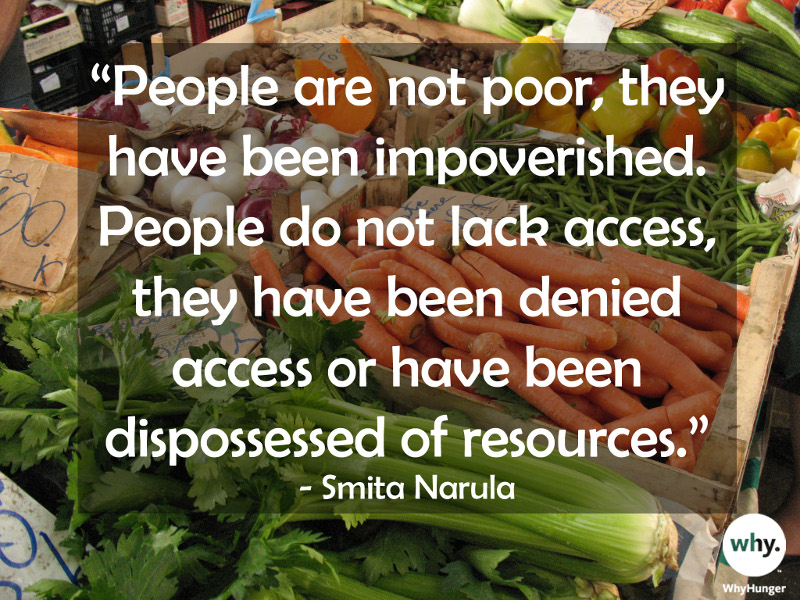 Listen to Smita Narula talk about the right to food.

Narula went on to explain that a rights-based approach to food emphasizes the government’s obligation, rooted in international human rights law, to ensure in a non-discriminatory way that food is accessible, both economically and physically, adequate in nutrition, affordable and sustainable in both production and consumption.

“Contrary to popular perception, the right to food is not a right to a minimum number of calories, or simply the right to government entitlements,” said Narula. “It is the right to a political and economic system, including a food system, wherein all people are empowered to provide for themselves in a dignified, healthy and sustainable way.”

When we look at food as one of those inalienable human rights, it becomes impossible to accept that 42 million people, including 13 million children, in the U.S. were food insecure in 2015. Facts that we in the “anti-hunger” community rattle off as talking points so often that they’ve been committed to memory, become unimaginable, even unconstitutional: 17 million children don’t have enough nutritious food to eat; the large majority of households facing hunger have at least one family member who works – often multiple jobs; hunger disproportionately affects people of color, women and children; food system workers face higher levels of hunger than the rest of the U.S. workforce – in fact, just 13.5% of all food workers earn a living wage.

And what these facts and stats can sometimes mask, is the underlying systems-level injustice that is at the root of hunger in America. “People are not poor, they have been impoverished,” said Narula. “People do not lack access; they have been denied access or have been dispossessed of resources.”

What are the possibilities for ending hunger if we stop asking the question “how do we feed the world” and if we stop looking at the hungry in the U.S. as folks who need to be “helped”? What are the possibilities if we reframe how we see those who are hungry as “rights holders who can organize to fight an injustice,” and we start asking why and how the human right to food is being denied? After 30+ years of building the most sophisticated emergency food system in the world, coupled with federally funded benefits such as SNAP (food stamps), we are still coming up short on solving the hunger problem in America.

“Hunger will not be solved by charity or by the commodification of land, but by ensuring rights, by ending social and economic injustice and by ensuring people’s agency over resources that are essential to their survival,” said Narula. “I am talking about nothing less than shifting people’s consciousness.”

It is clear that to put an end hunger in the U.S., we need to change the whole conversation. We need to ask different questions and seek out different solutions. We need a counter narrative. We need a transformation in our approach to ending hunger from a focus on charity to seeking social justice.

While many countries have successfully changed their constitutions with the support of social movements like La Via Campesina, the overwhelming feeling from the farmers, organizers, activists and anti-hunger organizations that attended the discussion in Montreal was that a policy change to codify the right to food in the U.S. was not the first goal, and certainly not attainable in the short-term. Rather, the opportunity in using the framework of the right to food in the U.S. lies in the critical step of building a groundswell of people – the food insecure, emergency food providers, farmers, consumers, activists and communities of color — who are organizing to change the narrative about what it will take to end hunger. If we shift the conversation enough, can we make room to focus on envisioning and implementing creative strategies, practices and programs at the community level that address the underlying issues of hunger and begin to transform our food system?  Can we put people and social justice at the center of our food system, not corporate interests and profits?

Using the right to food framework can help us tell a different story about hunger and what it will take to end it, and while we can hope and even plan for a day when America recognizes all human rights – including the right to food- we don’t need policy change to begin the critical work of changing the narrative, building consciousness and realizing our rights to safe and nutritious food.