This past month, WhyHunger participated in the 2015 US Social Forum, the largest gathering of grassroots organizations and social movements in the US. Inspired by the World Social Forum, which was first organized in Brazil in 2001, the first US Social Forum was held in 2007 in Atlanta, GA, and then again in 2010 in Detroit. This year marked the third US Social Forum and unlike previous years, it was organized in many locations simultaneously, in San Jose, CA and Philadelphia, PA, along with other meetings and actions happening in other areas. 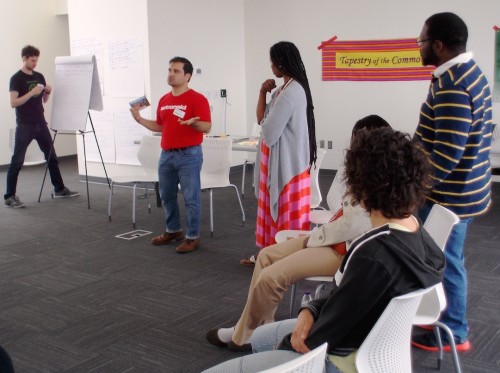 One of the unique aspects of Social Forums is their methodology. A Social Forum is not just a conference, it is a convergence. Social Forums prioritize the knowledge that grassroots organizations and the working people have – knowledge based on their perspectives for justice, knowledge of their communities and how to organize them, and knowledge of solutions to their own problems.

One way Social Forums are unique is through People’s Movement Assemblies, which are spaces dedicated to a particular issue where participants share their perspectives, analyses, vision and strategies on the issue or issues, leading to a collectively formulated statement or declaration and commitments on actions that all of the groups that participated can take. The People’s Movement Assembly (PMA) is a space not just to learn, but a place to plan and act together strategically.

WhyHunger co-organized a PMA at the Social Forum in Philadelphia, along with the National Family Farm Coalition and other groups, as part of the US Food Sovereignty Alliance (USFSA),to talk about how to reclaim the “commons”: those things like land, water and seeds that everyone needs for our basic survival, but which are being privatized and concentrated in the hands of a few. We don’t always make the connection between access to basic resources like land and access to food in the US – access to food usually means access to income – but in the rest of the world, the connection is often obvious: an end to hunger means that more people have access to and control over land, water and seeds to produce their own food.  The USFSA is an alliance made up of over 30 grassroots organizations and ally organizations, and it is organizing a Month of Community Power in October 2015 to coordinate activities of grassroots organization in the US that are working for their rights to land and water to produce their own food. The USFSA decided to organize PMAs at the Social Forum in Philadelphia simultaneously to the Social Forum in San Jose, CA, to build analysis and identify allies.

In our PMA, we heard from the many urban farmers in Philadelphia, a city with over 40,000 vacant lots where almost one third of its residents rely on SNAP and food banks, who are trying to grow healthy food for their communities, but who can’t get water for the crops and can’t get any support or protection. 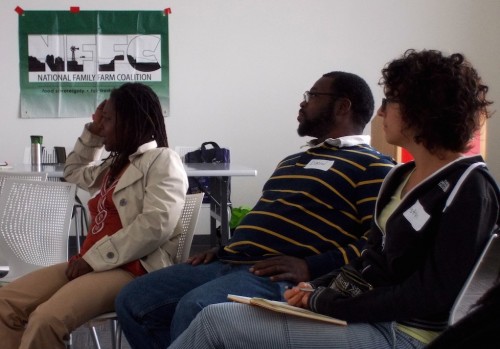 We also heard from migrant farmworkers, communities of mostly indigenous peasants from Central America who lost their land generations ago when they were not able to compete in the new global market and were forced to migrate to the US for work. Farmworkers in the US, many who come from farming backgrounds and possess invaluable traditional knowledge in agriculture, shared the immediate struggles they face – violence and profiling by the police, their lack of rights as immigrants and everyday racism and discrimination. As well as the struggle to access their own land, which they found almost impossible in the current context where they need to instead fight for living wages and work with dignity where they are not poisoned or harassed.

And we heard from local parents who are concerned with what food is available for their kids and how they lack access to what should be common to everyone: knowledge. They shared that they feel food corporations have taken control of the government and are working to block every efforts to inform citizens about what is in their food, reflecting on the tens of millions of dollars Agribusiness companies have spent to defeat “Right to Know” GMO labeling and Country of Origin labeling laws and campaigns.

But we realized that these were not new issues that people were facing. In fact, there is a long history to the situations communities find themselves in, from Black communities pushed into poverty in cities to indigenous people forced from their lands. We talked about the legacy of the colonization of the United States and the genocide of the indigenous people of this country, now confined to reservations and condemned to invisibility and indignity. We also talked about the legacies of plantation slavery that kidnapped millions of Africans to work and die in US agriculture and of the failure to provide any reparations or justice since the abolition of slavery five generations ago. We agreed that any solution that would really work for communities struggling with hunger and poverty would have to address and transform those legacies. Just like the Great Law of the Iroquois, that decisions should be made so that the world will be a good place for people seven generations into the future, we also agreed that we should act today to repair the destruction, violence and trauma that has been our history seven generations into the past. 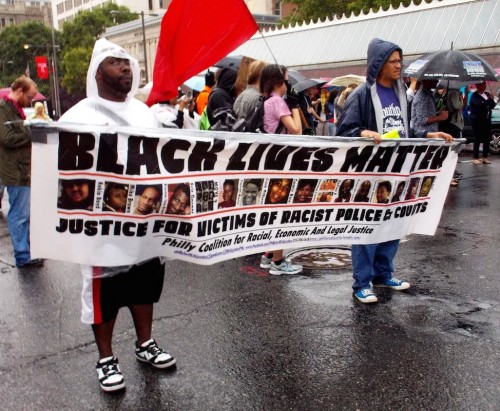 The group realized that what was at stake was our democracy, that our government often does not listen to the people or truly care about the people’s concerns, like feeding their families, working with dignity and ensuring that our communities are healthy. The solutions lie with the people. History has demonstrated that grassroots movements and people relying on each other and building the world they want will always create change and transform society for the better.

As part of the USFSA’s Month of Community Power, the participants at the PMA committed to a series of actions this fall to raise the issues we had brought up: that communities around the country are struggling; that they want land, water and seeds to grow healthy food and to work with dignity; and that the increased privatization, corporatization and chemicalization of food and agriculture will have to go.