“You pay a price for living in paradise,” says Gavin Thornton, co-executive director of the Hawai’i Appleseed Center for Law and Economic Justice. The fiftieth state has both the lowest wages in the nation after adjusting for cost of living and the second highest tax burden. Housing costs and homelessness are high. 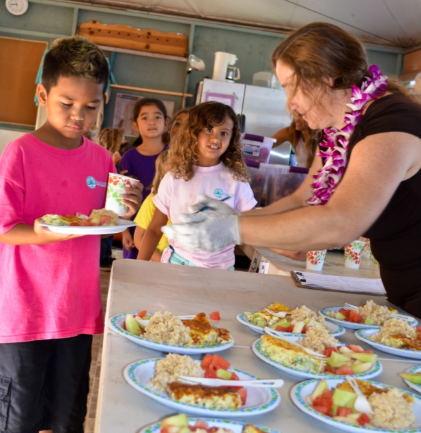 Students being served at the Kona Pacific Breakfast in the Classroom pilot project.

Appleseed’s mission is to promote policies that create a Hawai’i where everyone has the opportunity to build “economic security and fulfill their potential.” They conduct research, write reports, make policy recommendations, and build coalitions to advocate for change. Their anti-poverty work is responsive to the needs of the community as they evolve. It is through understanding those evolving needs that led to a focus on school breakfast, with the support of Hunger Is, a joint charitable program of the Albertsons Companies Foundation and the Entertainment Industry Foundation (EIF). 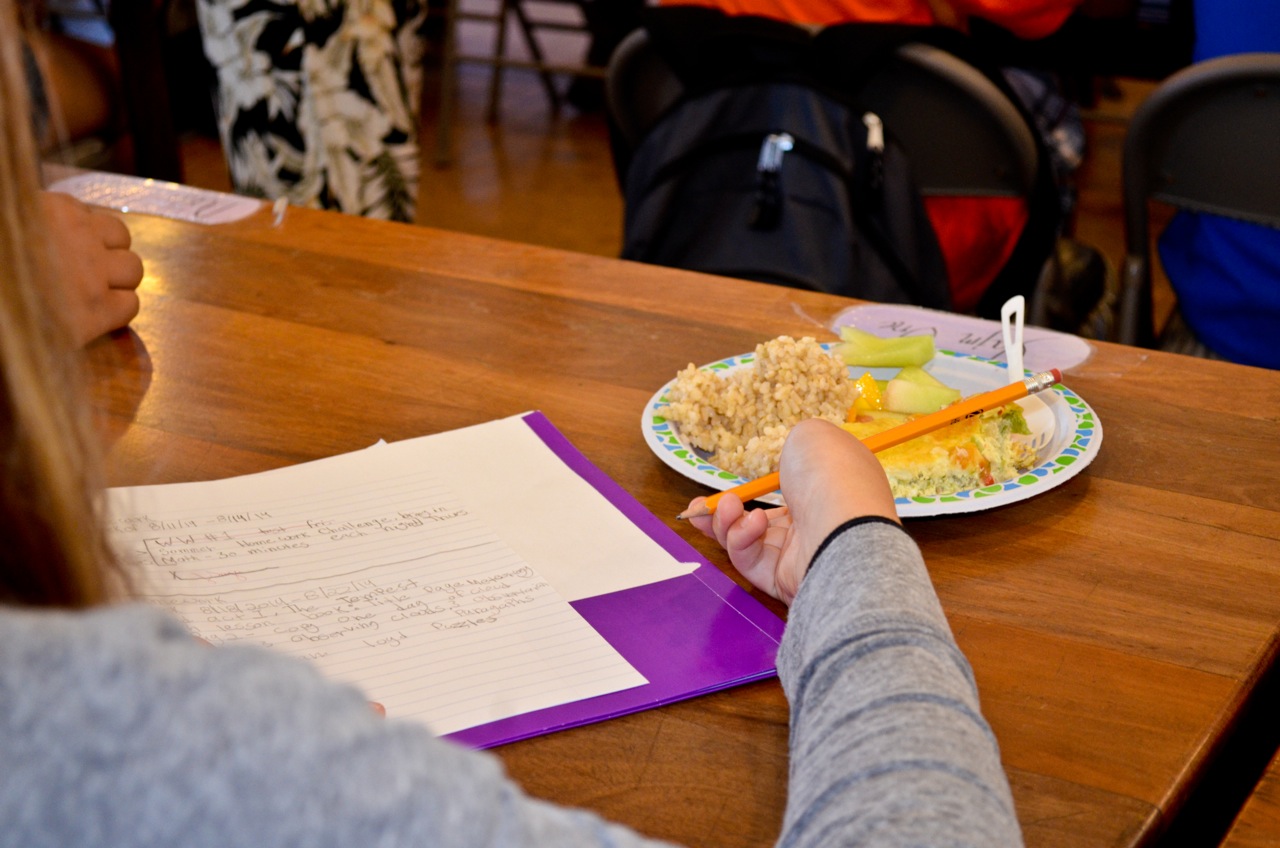 Eating eggs and rice in the classroom at Kona Pacific.

One in five children in Hawai’i are at risk of hunger. For Native Hawaiian and Pacific Islanders, it’s one in three. Hawai’i was recently ranked 47th in school breakfast participation nationally, which is particularly troubling because school meals are a resource for families to make ends meet. The improvements that a healthy diet makes to a student’s ability to learn and grow are well-established. Hawai’i Appleseed decided to intervene.

Even though Hawai’i has a year-round growing season, the vast majority of food consumed locally is shipped in by plane or sea. Native Hawaiians developed a sustainable agricultural system that was lost when American colonizers brought, and later abandoned, sugarcane and pineapple plantations. Physical isolation and an economy based on tourism contribute to the dependance on imported food. It is environmentally unsustainable and places the state at a huge risk if the food supply is suspended due to a natural disaster or rising fuel costs. 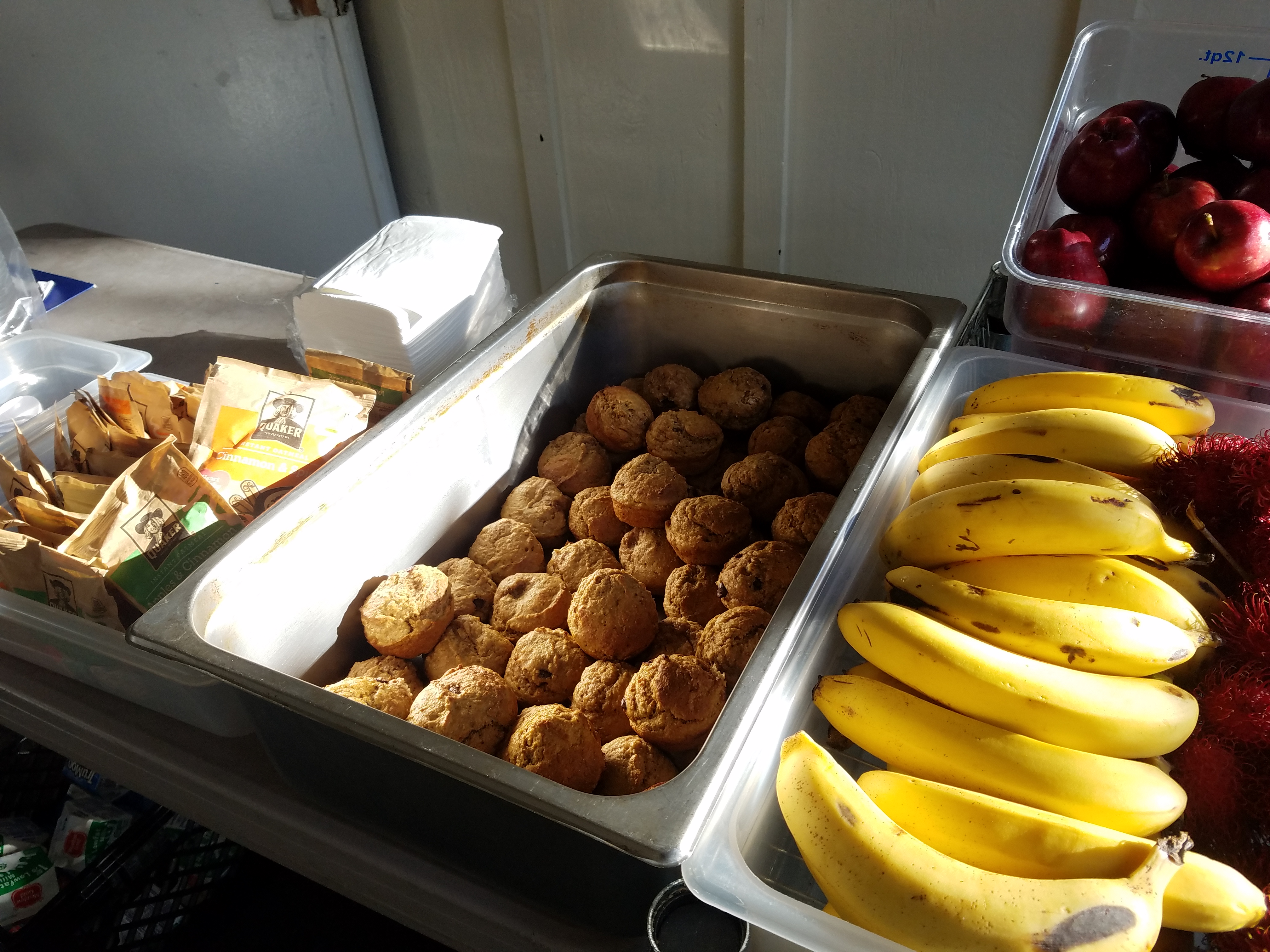 Hawai’i is also the only state in the nation to have a single, statewide school district. While that might make sense from a purchasing perspective (economies of scale), it doesn’t allow for much creativity. For example, schools expressed interest in experimenting with school breakfast programs, but a key decision maker was resistant to change. That meant the entire district was stalled and Appleseed needed to find a new approach.

The challenges of this entrenched bureaucracy, and the fact that the Hawai‘i Department of Education abruptly stopped providing meals to charter schools due to budgetary concerns, led Appleseed to focus its efforts to increase school breakfast participation in public charter schools. At the Volcano School of Arts and Sciences—a charter school in a rural, sparsely populated town in the shadows of an active volcano—they piloted a grab and go breakfast program. At the Kona Pacific Public Charter School, they now serve a healthy, nutritious breakfast and teach kids about where their food comes from and how it’s grown. The Big Island, where both these schools reside, is a hotbed of innovation on food and hunger issues due to a combination of community efforts and state agricultural investment. Through a grant from Hunger Is, Appleseed was able to provide funding and technical support to get these breakfast programs “up and running quickly” at both schools after months of building relationships in the public school system. 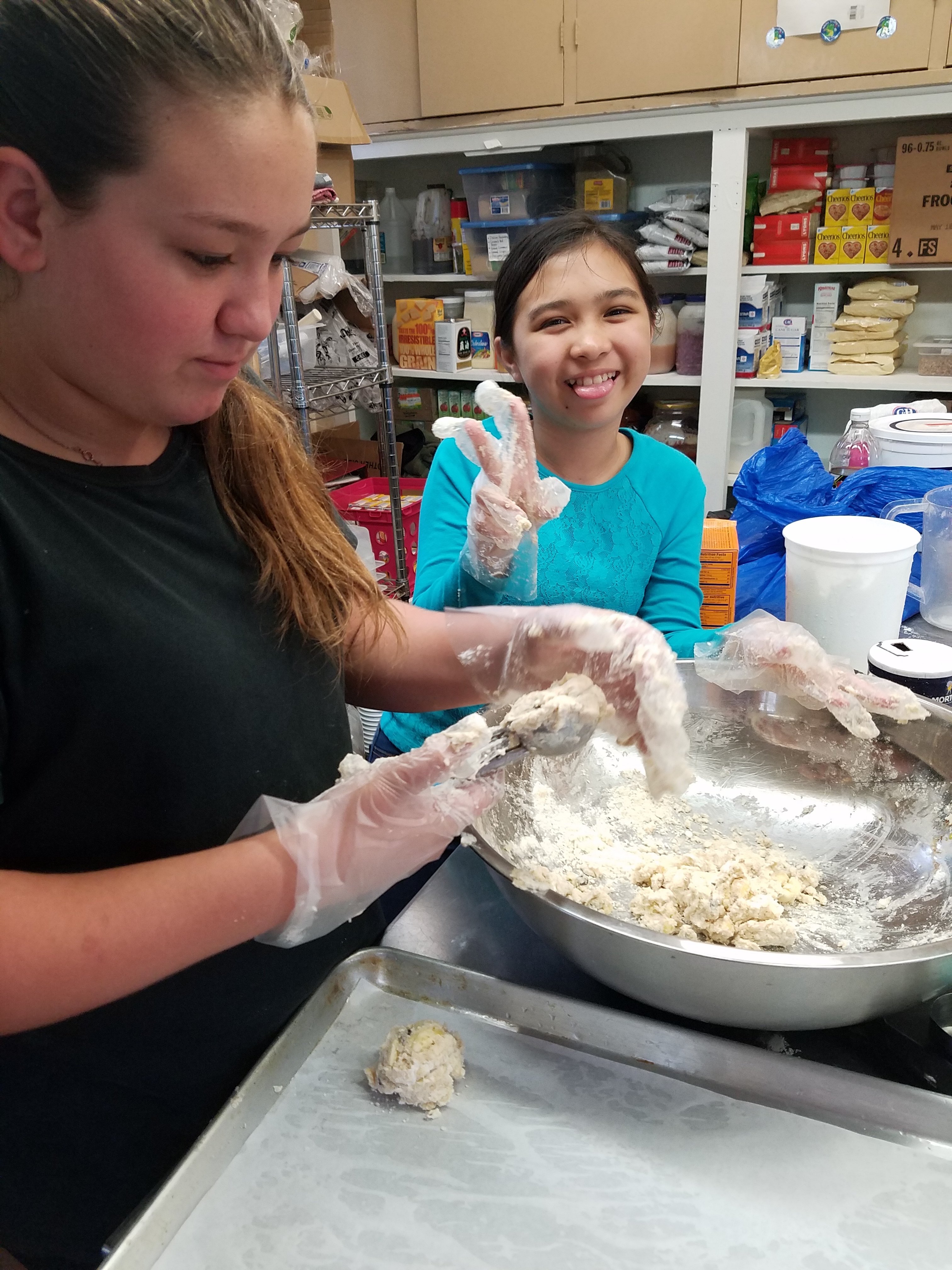 Students preparing food at Volcano School of Arts and Sciences.

But there is reason to hope for greater adoption of school breakfast in the public school system as well. A Farm to School Initiative being led by Hawai‘i’s Lieutenant Governor aims to connect Hawai‘i’s keiki (children) with the aina (land) through their food. The project seeks to increase local food purchasing and school meal menu development. Appleseed is partnering with the Kohala School Complex to include a school breakfast pilot program. Locally sourced fruits like bananas, navel oranges, papaya, tangerines, and tangelos are being used, and school lunches include familiar foods made from scratch like kalua pig with cabbage or chicken adobo sliders with green papaya. Appleseed works with them to create breakfast menu items for both grab and go and in-classroom breakfast service like ulu (breadfruit) flour muffins. That could lead to replication statewide.

Thornton’s first project as a newly minted public interest lawyer was working in partnership with Appleseed and public housing residents who were complaining about the condition of their units. An association was formed, landlords retaliated against organizers, more people from the community got together, and they “stumbled on a statewide issue of overcharging public housing residents for their rent.” They were ultimately able to win rent reductions worth over a million dollars annually. 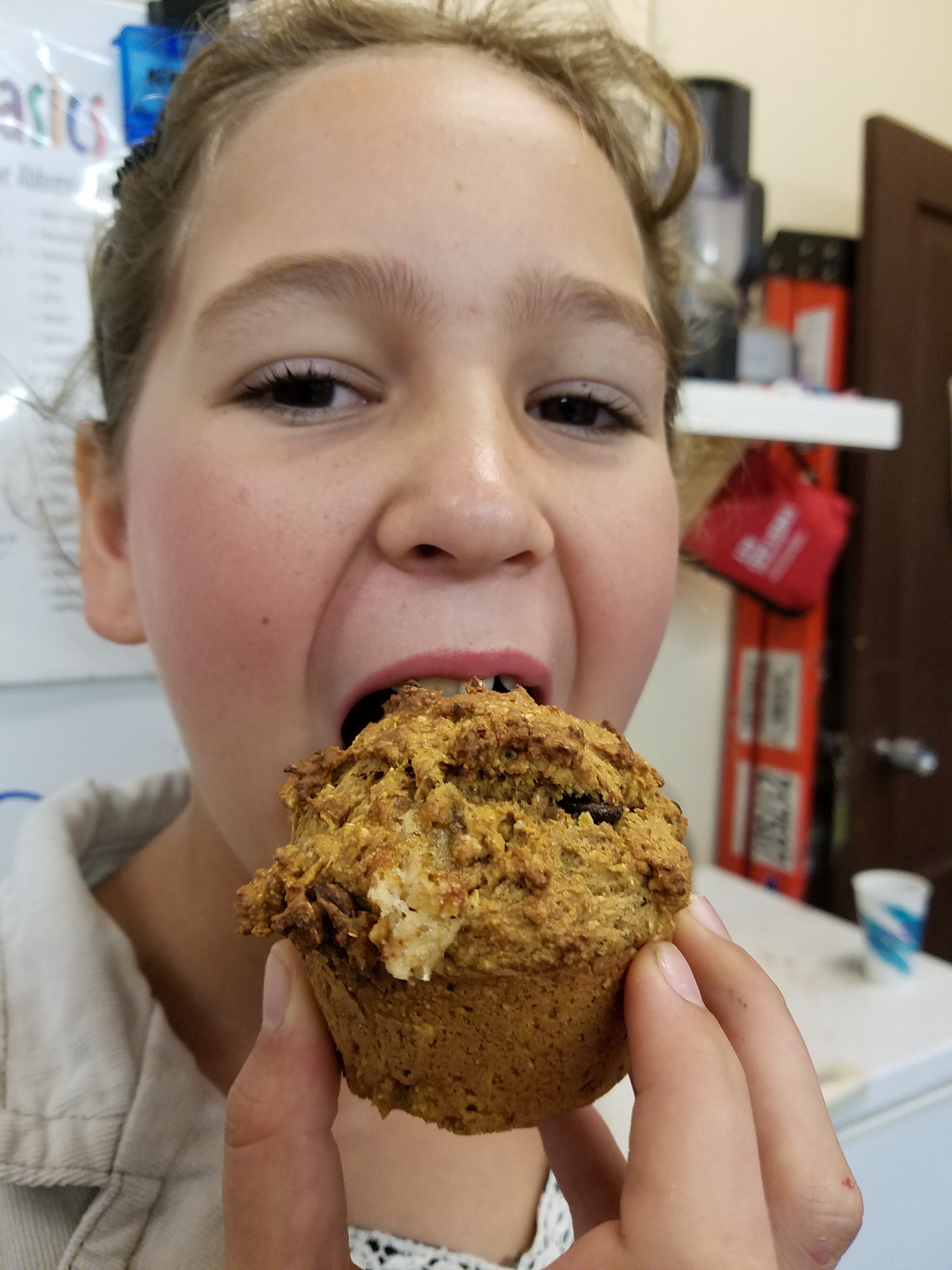 Even with the political climate of attempts to cut Medicaid and food programs at the federal level that help low income people survive, Thornton is optimistic. “One of the things that’s been inspiring to me is seeing this tax bill passed,” he says of a new state earned income tax credit (EITC) that was signed into law in July. “We’ve seen a lot more energy in the community from people who are recognizing the need to do something, to care for our communities. People have been working on that [tax bill] for over twenty years. We took up the reins four years ago. A huge part of [the success] was the involvement from the community, from people who gave supportive testimony. There was ten times the amount of testimony as in prior years. That’s hopeful to me.” The bill is estimated to provide over $130 million in tax relief over six years for low income families that are struggling to put food on the table. With that kind of organizinig background, building support to implement school breakfast across the archipelago doesn’t seem too far out of reach.

Shortly after we spoke with Thornton, Hawai’i became the first US state to pass a bill supporting universal basic income. Looks like we’ll be seeing more innovation and leadership from the islands to come.

Hunger Is, a joint charitable program of the Albertsons Companies Foundation and the Entertainment Industry Foundation (EIF), builds awareness and raises funds to end childhood hunger. The Hawai’i Appleseed Center for Law and Economic Justice received a grant to fund efforts in Hawai’i. This is the fourth in a WhyHunger series of five profiles of grant recipients.