WhyHunger’s International Solidarity Fund invested $305,699 in strengthening existing and emergent social movements for food justice and food sovereignty by supporting 25 community-based projects in 13 countries to end hunger among peasant, fishing, and indigenous communities worldwide. Additionally, we secured a donation of $500,000 to support and grow the fund in 2017.  By investing in local community-led activities like agroecological training, leadership development for women and youth and capacity building projects, tens of thousands of families are benefitting from immediate access to nutritious food and education while the food sovereignty of entire communities is strengthened. 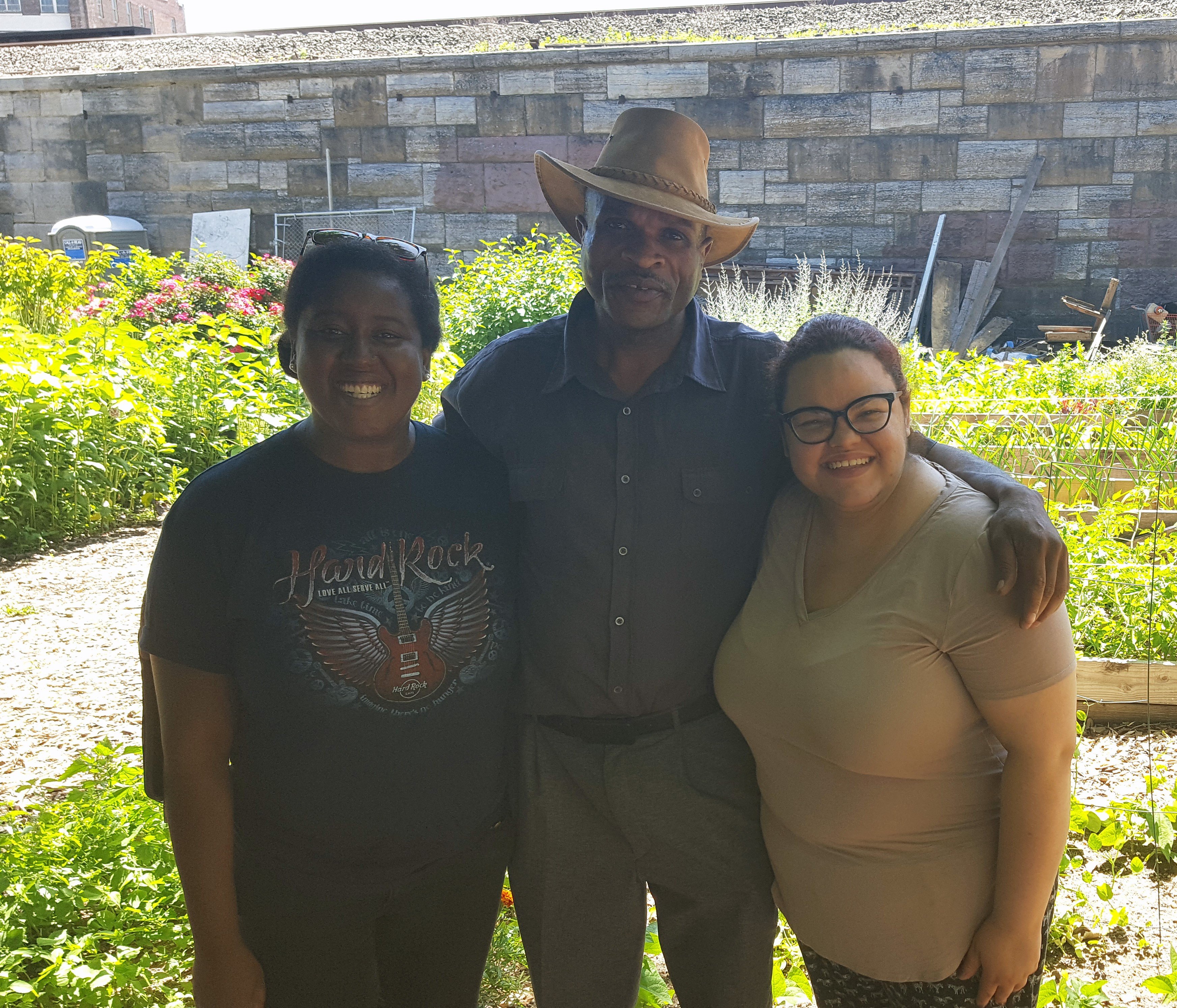 WhyHunger organized and accompanied key social movement and grassroots partners from the Global South through five strategic site visits to the United States where our allies from Brazil and Zimbabwe were able to meet, learn, share and build solidarity with WhyHunger and allied organizations by supporting and practicing agroecology in the U.S. These exchanges are critical steps in helping to build capacity for individual organizations while strengthening the fabric of the growing social movement for food sovereignty and justice for all.

WhyHunger is actively supporting and stewarding a national alliance of emergency food providers to shift from a model of charity as the solution to hunger to a model of social justice.  In 2016, we facilitated a leadership retreat to establish a clear vision, goals and plan for the growing network and the Closing the Hunger Gap national conference in fall 2017, which aims to attract more than 500 participants from all 50 states.

Our popular Food Justice Voices series What Ferguson Means for Food Justice, a powerful collection of articles featuring the grassroots voices of Black leaders working within movement building and food justice, produced 3 new issues. We launched a new report titled School Breakfast at Half Century – A Look Back to Move Ahead from activist, author, professor and WhyHunger Board Member Janet Poppendieck, an animated video If You Give Someone a Fish illustrating our theory of 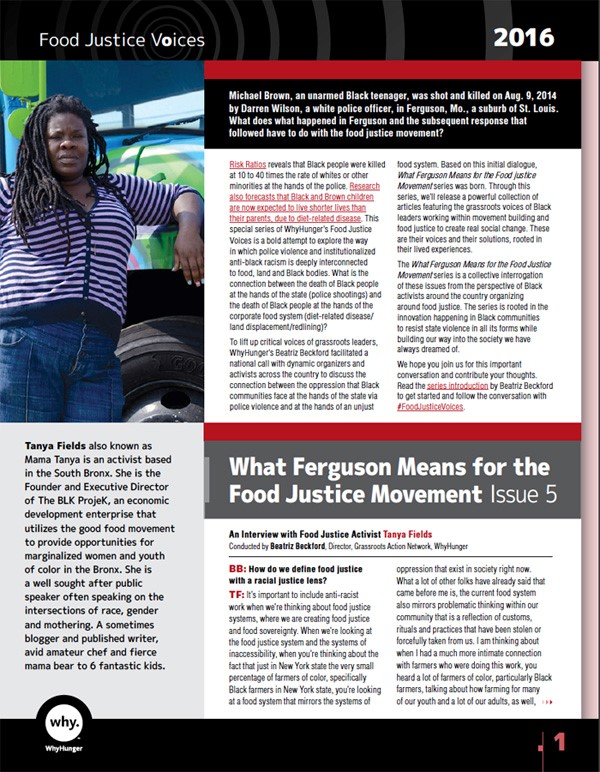 change, and Connecting Hunger & Health in Brooklyn and Beyond a video that tells the story of food justice and health in everyday lives. These publications and materials helped to educate and engage hundreds of thousands on the issues and solutions at the root of hunger and poverty.

WhyHunger continues to organize grassroots partners using our community of practice methodology around the intersection of hunger, food, agriculture and social justice.  In 2016, we convened and led communities of practice for 70 participants around Hunger and Health in the Mid-West and Mid-Atlantic regions and nationally around Youth and Food Justice and Race and Food Justice.

WhyHunger supported and accompanied Rooted in Community, a national youth food justice alliance, as they work to organize youth food justice leaders to build collective power. In 2016, WhyHunger provided capacity building support by facilitating a process to re-envision the organization’s governmental structure and by providing funding for youth to participate in their annual Youth Leadership Summit where they joined in skills building, co-learning, creative arts and direct action.

After two years of organization and incubation, the National Black Food and Justice Alliance, an independent alliance of Black-led organizations, is on its way to a national membership base of 100 organizations coming together around amplifying the voices and impact of black leaders calling for land justice, food justice and racial justice.

Protecting the Right to Food 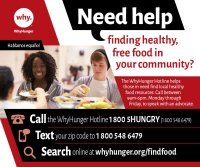 WhyHunger became the first and only U.S.-based member of the international Global Network on the Right to Food and Nutrition, which promotes the realization of the human right to nutritious food and acts jointly to support advocacy campaigns, community-driven solutions and collective action to address violations and abuses. Our participation is a critical step in bridging the gap between the international and U.S. based efforts to realize the right to nutritious food for all.

WhyHunger is developing the most comprehensive database of food access organizations in the U.S., placing an emphasis on those that provide nutritious food.  Currently with 20,932 organizations and growing, we are utilizing whyhunger.org/findfood, a new texting service and our WhyHunger Hotline 1-800-5HUNGRY to assist over 394,296 individuals annually to access healthy food in their communities.

WhyHunger co-organized two well attended workshops on the Right to Food in the U.S. and People’s Agrarian Reform in conjunction with La Via Campesina North America at the 2016 World Social Forum in Montreal. Through these forums, we were able to build international solidarity, provide scholarships for community-based leaders to attend and begin to strategize with social movement leaders in support of our shared mission.

In 2016, our Artist Against Hunger & Poverty program partnered with Bruce Springsteen and Prophets of Rage at their NYC concerts to raise funds and build awareness onsite.  We also teamed up with Prophets of Rage on their first-ever tour where we invited grassroots partners in local tour markets across the U.S. to be onsite at the concerts to collect donations to alleviate hunger in their communities.

The 2016 Summer Meals Rock for Kids campaign brought together a variety of musicians who support WhyHunger’s work to help children get access to free meals in their neighborhood during the summer. Artists such as Paul McCartney, Bonnie Raitt, Rascal Flatts, Chris Cornell and more lent their voices and talents to raise funds and awareness through social media and auction items.