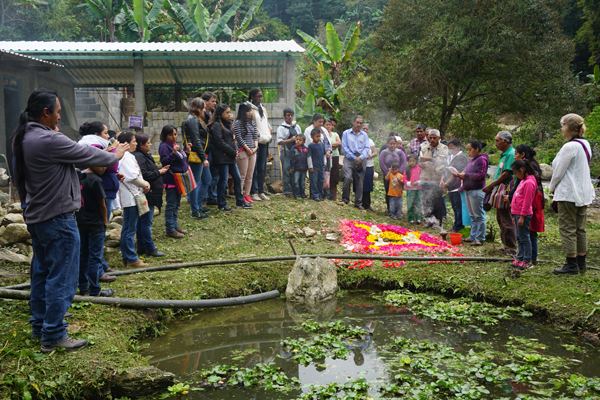 Over the last half century, small farmers and fisher people across the world have increasingly been dispossessed of their land and denied resources while multinational food corporations have grown to be ever more powerful. In response, landed workers and fisher people began to organize. Yet in order to take on the global food system, they needed to mount an equally globally response. Local organizations came to understand this, and as a result, combined their efforts to form global social movements. One of the largest is La Via Campesina, or the International Peasant’s Movement, which represents the interest of peasant farmers around the world.

As part of WhyHunger’s mission to address hunger at its root causes, working with social movements across the world is one of our top priorities. Through our Global Movements program, we aim to provide social movements with logistical and financial support that is suited to their needs. Saulo Araujo is director of the Global Movements Program at WhyHunger. We sat down with Saulo to tell us about how WhyHunger works with social movements to change the food system by empowering local farmers and ending our dependency on multinational food corporations.

Q: What is the international solidarity fund and when was it created?

The Egidio Brunetto International Solidarity Fund is a mechanism to mobilize financial resources to social movements worldwide. Egidio Brunetto was a member of the Landless Workers Movement and La Via Campesina International that embodied the vision of internationalism as a necessary step towards deeper social transformation. The Fund was created in 2013 as part of our strategy to strengthen global movements led by rural and urban people, indigenous people and women.

Our grant-making (and fundraising) through the International Solidarity Fund is not limited to geographical boundaries or thematic areas. It is coordinated directly with our ally global movements and their members at the national level. Together with our allies, we define what and how our support will be. This arrangement is only possible because of long term relationships and trust built over time. It is also important to mention that our relationships do not begin with, or are limited to funding. The International Solidarity Fund is an important tool, but it is only one of the tools or ways that we support the protagonism of our allies.

Q: So, what are some of the other ways that we support social movements?

Good question. We identify the needs of our allies through continuous communication. If the needs are, let’s say, coordinating the logistics for a learning exchange, we will identify which areas we can help directly or indirectly. We can provide them with staff time, for example. Many of us at WhyHunger are bilingual or trilingual so we also often help with the translation of documents and interpretation. Sometimes we help coordinate housing and organize airline tickets. Another important resource that we offer is contact information from other US organizations, funders or scholars that might support them in achieving their goals.

I believe the most important is how we accompany these dynamic social movements. Conventionally, for many foundations and funders, it is practically impossible to take specific steps that accompany grant-making. The staff doesn’t have the time to know everybody because they receive tons of proposals. Our grant-making through the International Solidarity Fund is always a result of our accompaniment through direct communication with our allies and our own monitoring and study of the conditions they are facing on the ground.

Q: In what ways is this relationships-based strategy a more effective and sustainable way of working with social movements?

Social movements are massive organizations formed and led by those most affected. Unlike non-profits whose scope is very local, social movements are organized in thousands of communities. They have coordination spaces at national, regional and global levels. It is like a gigantic network led by people with the same goals and vision.

Funding social movements is undoubtedly the most efficient way of supporting deeper social transformation because the funding will be directed by and for the most affected. Second of all, social movements are dynamic, resourceful organizations. Needless to say, members are fully committed to the solutions for their own problems. They know what is needed. Also, the information is always in movement, too. It is shared and never stays local because the problems (and their roots) faced by one community’s families are similar in others. Let’s say, for example, somebody develops a technology or an agroecological practice that works well. It is very likely that neighbors are going to start talking to each other and sharing that knowledge. In my work, I have seen many of those practices developed within social movements being disseminated to other communities or becoming policies. So, every time we support initiatives led by social movements there is a good chance that will trickle horizontally and vertically through the existing channels. The funding will generate a ripple effect years after the grant period is completed.

In the social movements we work with, there is a sense of accomplishment in everything they do. Nothing is taken for granted. “This is what we fought for”; “We established all these relationships, and we worked hard to do so”.  This kind of vision and commitment is contagious and certainly has influenced us to go deeper and perfect our practice as allies.

Q: How did WhyHunger come to identify and build relationships with its global partners?

First, we identified where the global movements meet. They meet in specific spaces and they are already in conversations amongst each other, developing a shared analysis. We have met several of them in meetings at the United Nations around trade, climate change and food. Often, global movements organize parallel events where they coordinate and join forces to make interventions within the United Nations. These established relationships between global movements and the dialogues generated in those spaces are central for our strategy because our main goal is to strengthen social movements as social forces for change.

Second, our participation in those spaces offered us the opportunity to understand their history and perspectives. Currently, we have long standing relationships with La Via Campesina International, the World March of Women, and the World Forum of Fisher People.  Based on these initial relationships at the international level, we identify and build relationship with members of these global movements in different countries and regions. Today, we accompany 35 national social movements worldwide and that number will continue growing as we are able to mobilize more funds.

Q: What’s the importance of international solidarity for social movements in changing the food system?

We work with global movements because the problems we face in the U.S. are very similar to those affecting other countries. We like to say that the chronic problems of hunger, patriarchy and climate change are global. Therefore, we need a global strategy to contain and dismantle the structures that generate these problems. Social movements are the expression of international solidarity, humanity and real democracy on many levels. They foster interdependency and solidarity among people independently where they live, race, gender and sexual orientation.

Q: What is one example of how WhyHunger has worked with one of its partners?

In Paraguay, the Peasant organization of indigenous women organized an agroecology school. That agroecology school is part of a network of schools for rural people by rural people. When we learned about the school, our allies approached us for support, and we said that’s definitely important for us to support, because we know that’s part of our global strategy to make sure that more farmers are trained in agroecology and can sustain the land and produce food sustainably and so on. Within less than a month, we were able to make a small grant to support the first class in the school.

Towards the end of the course, the government decided they didn’t want to recognize the school anymore and the students were no able to receive diplomas for their studies in Agroecology. Our allies had to reorganize themselves again. And they said, “we’ve been working on this for three or four years but we’re going to continue trying, we actually got a new building and we want to put up dorms, can you help us?”. Internally we worked to raise the funds and we finally did and made the grant to them. A few months later, they reached out again and told us that another challenge emerged: the electrical net was insufficient to pump water to the buildings. They said, “our initial idea won’t work, we cannot even build the dorms right now because there’s no electricity. We should invest in electricity. Can we change the plans on how we will use the funds you gave us?” And our response was, “Okay, sure. You can use the money from the dorms and use to install the electrical net.”

That’s a snapshot of how our grant-making works. If there is any way of measuring impact, the fact that the government didn’t give them the recognition and the students couldn’t get a diploma, you could say, “oh this is a failure why waste the money”, right? But for us, the fact that our ally continues pursuing their plans, it’s a victory, because you see the wheels of social movements turning. When people lose steam and don’t want to fight for their cause anymore, then it’s a failure. For the most part, we haven’t seen situations of failure also because as part of a collective, people in social movements do not feel isolated or powerless. They believe they are on the right path. And that is inspiring, a source of energy to walk alongside of them.