Learn about the emergence and evolution of the global movement that is mobilizing those who produce, distribute and consume food. 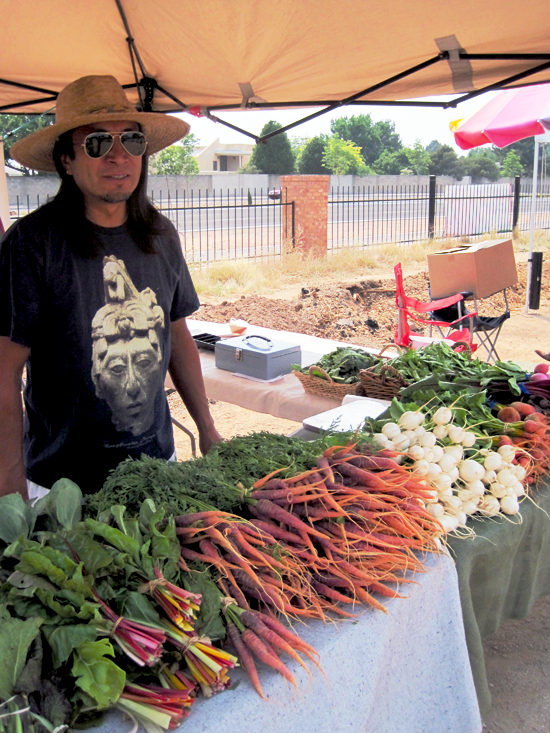 “We envision empowered communities everywhere working together democratically to advance a food system that ensures health, justice and dignity for all. Farmers, farm workers, ranchers and fishers will have control over their lands, water, seeds, and livelihoods (and) all people will have access to healthy, local, delicious food.”
– National Family Farm Coalition, Food Sovereignty Vision Statement

The term “sovereignty” includes power, empowerment, freedom, control, access: a global “food sovereignty” movement is emerging to mobilize those around the world who produce, distribute, and consume food. In short, food sovereignty is defined as the right of people to define their own food and agriculture systems. The term may be new to many of us, but more and more people want to put healthy food in our communities and be part of a food system which is under community control and not dominated by food monopolies. The food sovereignty vision described above is becoming the most dynamic and comprehensive force in this global food movement.

The Emergence and Expansion of Food Sovereignty

Food sovereignty, as described in the declaration of the Nyéléni 2007 Forum for Food Sovereignty, puts “those who produce, distribute, and consume food at the heart of food systems and policies, rather than the demands of markets and corporations.” La Via Campesina connects over 150 local and national organizations and over 200 million small-scale food producers in seventy countries. Food sovereignty coalitions have spread throughout Latin America, Africa, Asia, Europe and North America. In the United States, the National Family Farm Coalition (NFFC) is one of several Via Campesina affiliates dedicated to food sovereignty, and WhyHunger, along with NFFC and other partners, has been instrumental in launching the US Food Sovereignty Alliance and organizing the annual Food Sovereignty Prize.

The Values of Food Sovereignty

One of the things that makes food sovereignty so powerful is that it is coming from those who are most impacted by the injustices of the global food system. These groups have historically been excluded from the decision-making spaces where powerful forces determine policies that impact their lives and livelihoods. In 2007, movements from across the world came together in Mali for the Nyéléni 2007 Forum for Food Sovereignty to articulate a common vision and platform for food sovereignty. The following “6 Pillars of Food Sovereignty” were among the results of this forum:

(The Six Pillars of Nyeleni – from: Nyeleni Forum, 2007, final report)

The Agenda of Food Sovereignty

The food sovereignty movement has a directly political agenda, to roll back the corporate assault on our food and farming systems, and to challenge the concentration of corporate power over soil, seeds and food sales. An example of destructive policy informed by the interests of corporations are free trade agreements which destroy the livelihoods of small-scale and indigenous farmers.  Social movements instead support the kind of technology and trade which maintains the traditional ways of the people and is in harmony with nature. Since the corporate food regime is global, the food sovereignty movement must also be global, hence the slogan “Globalize the Struggle, Globalize the Hope!”

Many of us who are part of local food movements, whether in anti-hunger work, farmers’ markets, community gardens, or urban farming are thrilled that the usual divides between Urban-Rural populations and Global North-Global South are being bridged by this food sovereignty movement which is carried along by thousands of farmer and food worker groups, in partnership with consumer groups, nonprofits, and faith-based and community organizations. The new concept of food sovereignty goes beyond the requirements of food security, which focuses largely on access to food, by questioning who is controlling our food. In bringing together diverse populations, the food sovereignty movement is dealing with issues of race, class, and gender, thus connecting to the movements for food justice and food democracy.  Food sovereignty builds upon the knowledge and skills of those who work the land and indigenous peoples, thereby embracing agroecology and earth stewardship. Its voice is a call to solidarity with the earth and its peoples, providing an alternative to the industrial food production and consumption system. You can find testimonies to the power of the food sovereignty movement and the challenges it faces in the Voices from the Field section of this topic.