For generations, many people think agriculture and picture rolling fields, red barns, rural farms. These days, urban agriculture and community gardens have helped many city-dwellers return to their roots in a whole new way. 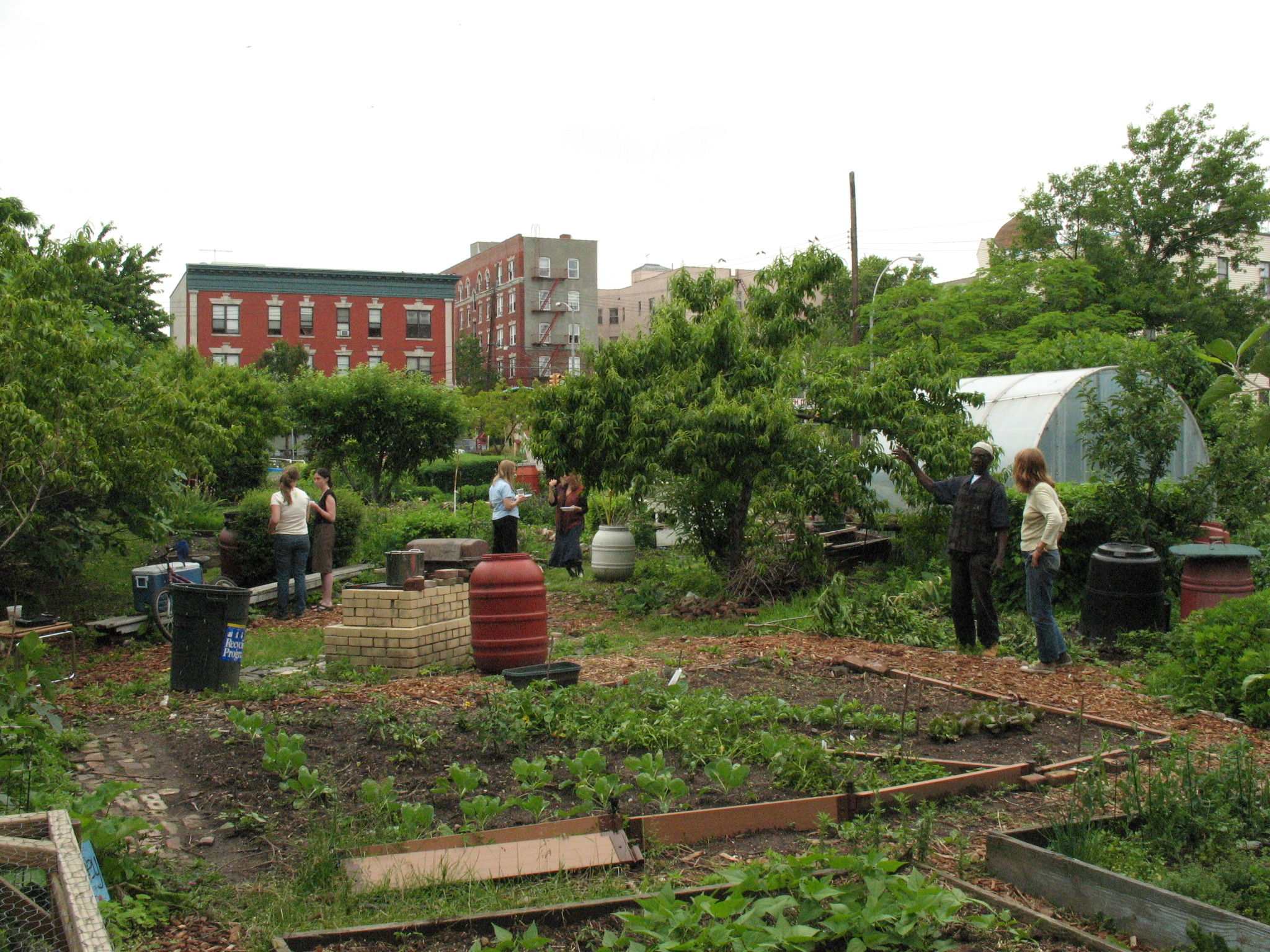 As you walk around the corner, you see a large crop of ripening fruits and vegetables being harvested and you might think you’re seeing one of that city’s many new community gardens. But after further observation, you realize this is not the cultivation of vegetables and fruits in small, individual plots. Those picking what looks to be a sizable number of heirloom tomatoes range from middle-aged to early teen, and represent several ethnic groups. Hip-hop beats coming from speakers set near a group of wheelbarrows reflect a youthful, enterprising energy.

After asking permission, you walk around the once-vacant lot. What you saw from the street now reveals itself as serious farming. Rows of tomatoes and lettuces, strawberries and kale, okra and hot peppers have emerged from almost-black soil. Towards the rear of the lot you spot several square bins made of concrete block, in which organic matter, collected regularly from a number of nearby sources, is becoming rich compost.

Next to these are two small hoop houses made of curved aluminum pipe and covered with plastic sheeting. Each are filled, one with stacks of trays holding plant seedlings and a desk covered with papers noting planting and harvesting dates, seed catalogs, plumbing hardware, and logs of staff and volunteer hours. The other contains a row of rough wooden boxes in which red wriggler worms are turning the already-rich compost from outside into “vermicompost.”

And if this wasn’t enough farming, one of your hosts explains that the lot’s only unused section will soon be the site of a chicken coop – provided local government passes a new ordinance allowing a limited amount of city-raised poultry. This description is a composite image of the community-based food-producing activities occurring with greater frequency – and urgency – in the hearts of American cities.

Urban agriculture in the US and Canada has established an identity connected with the growing movement of “eating local” developed through farmers’ markets and restaurants. But this identity also builds food security among the urban and suburban poor, who, as in developing nations, increasingly see city farming as a means of subsistence.

Urban agriculture is diverse and takes on different scales and structures in cities around the world.  From non-profit institutions and block clubs to commercial farms and city-sponsored projects, urban agriculture is only becoming more adaptable and creative.

It is impossible to know with certainty how many urban agriculture projects and community gardens now operate. The American Community Garden Association has a growing database of thousands of community gardens in the US and Canada. It is hard, in part, to track these projects due to the lack of a clear boundary between urban farms, community gardens, and individual backyard gardens – each of which represents non-rural food production. But another reason is that urban agriculture is now growing rapidly with new initiatives constantly underway. And this new enthusiasm for growing significant amounts of fresh food in cities – and the social benefits that accompanying urban farming – shows no signs of slowing.

Urban agriculture efforts can improve access to healthy, affordable food for low-income communities and have become a hands-on community response to food deserts. They can also provide supplemental incomes and local jobs, build job skills and confidence for youth and people transitioning from homelessness or incarceration, revitalize neighborhoods, increase community economic development, reconnect communities and immigrant neighborhoods with their cultural traditions and skills, and make productive use of vacant land.

“To grow your own food gives you a sort of power and it gives people dignity. You know exactly what you’re eating because you grew it. It’s good, it’s nourishing and you did this for yourself, your family and your community.”
–Karen Washington, Garden of Happiness, Bronx, NY

In the same way an active school, church or community health center improves an urban neighborhood, so too can an urban farm or community garden help connect the grassroots assets of an area. For decades, community gardening has been the vehicle for this type of ground-up community revitalization: it was true of NYC in the 70s and 80s and is true of Detroit today. Many other cities’ community gardens literally grew out of community efforts — often mobilizing the community around issues of poverty and justice in the process.  As gardening turns consumers into producers, community gardening can turn residents into more engaged members of the community. Many gardening communities develop an education component, through one-on-one skills building and exchange or more formally through youth groups or classes. This kind of involvement in a garden gives people a commitment to their neighborhood, community, and their food system. The effort to organize blocks and neighbors, to reclaim and transform land reflects a larger conversation of communal planning, decision-making, and the messy democracy of co-creating space and place together.

Effective urban farmers are often community leaders, with leadership manifesting itself in various practical and symbolic ways – as role models for youth, as a link to resources from outside of the community, or as magicians who turn barren and forgotten parcels into green and productive urban oases.

On to the nitty gritty: what exactly is urban agriculture?

Urban agriculture/urban farms encompass many types of small and mid-sized agricultural operations designed to serve urban communities. This includes community gardens and farms located in urban areas, as well as those in peri-urban areas that serve urban populations.

Growing food in and on the edges of cities is not a new concept. For centuries, we have been growing food in urban cities, but this practice began to disappear due to industrialization, growing urban populations and consolidation of agricultural operations. Urban cities and agriculture are once again building a powerful intersection, pushing the edge of what food production looks like and how it happens: on rooftops, in vacant lots, using new techniques of hydroponics, aquaculture and vertical farming.

Although the cultivation of vegetables and fruits through sustainable, organic practices is the core urban agriculture activity, urban farmers frequently grow non-edible products for sale, such as flower baskets. Others focus their energies on the raising, planting and harvesting of fruit trees throughout metropolitan areas. And aquaculture, sometimes involving closed loop growing systems combining the raising of fish with the cultivation of plants, is an emerging form of urban farming.


Much more than just the act of growing food, urban agriculture includes the processing – or “adding value” – of raw foods, such as the making of honey or fresh salsa, the targeted distribution of produce and value added products to consumers, and the generation of revenue from these actions. In many ways, urban farmers are no different from traditional farmers – apart from the factor of scale, which can be significantly different. Urban farmers still have the concerns and face the risks inherent in any farm activity: unpredictable weather, adequate soil fertility, choosing crops that will sell, the availability of labor, keeping the books. They also eagerly share their knowledge and passion for farming to others. As our food is grown in closer proximity to the communities that rely upon it, these integral skills and knowledge are transferred to a broader base of food growers and eaters all along the food chain.

Apart from the characteristics that relate it to traditional farming, the best examples of urban agriculture are community based. This integration can take many forms: the farm can be a program within a social service organization with a long record of success at providing housing, health programs or youth activities. The urban farm can draw on local residents to serve as farm volunteers or as members of the organizational board of directors. And, of course, the urban farm can direct its produce to consumers living no more than a few blocks away and local schools, restaurants and hospitals as part of the growing farm to institution movement.

Along the Continuum: Urban Agriculture and Community & Backyard Gardens

While backyard and kitchen gardeners generally garden individually on private land, community gardeners use land shared among several households. Community gardeners generally grow produce to eat at home or to share. They allow the benefits of backyard gardening to those lacking backyards, and serve as excellent examples of self-organization. In recent years, however, encouraged by the American Community Gardening Association, community gardens are increasingly seen as partners with urban farms in becoming important elements in a community-based food system.

Some community gardens, often in urban areas, move into growing for commercial use — one view of the difference between a community garden and urban agriculture defines the latter as gardens or farms planted for the purpose of selling the produce. Commercial urban farms can expand production on their generally small land area with aquaculture, hydroponics, and greenhouses — and may partner with a commercial kitchen to create locally-produced value-added products such as jams and sauces.

The line between community garden and urban farm isn’t often clear — and sometimes overlapping, as is the case in the Troy Community Gardens in Madison, Wisconsin. Over a third of the over-200 community garden plots are assigned to individual Hmong families. In past years, Hmong gardeners have fenced contiguous plots together to create an urban farm that directs fresh indigenous food to the extended Hmong community in Madison.