Almost one-sixth of the U.S. workforce works in the food system. Find out more about the hands that feed us. 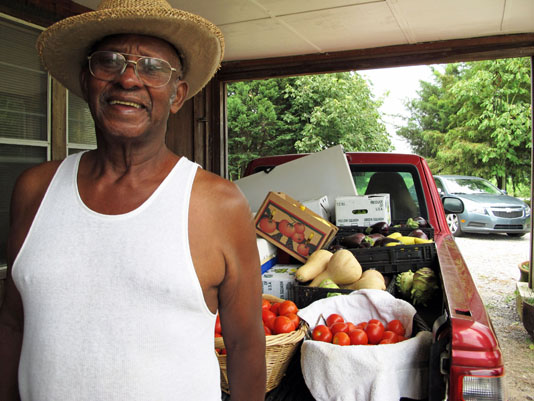 Frank Wilbourn, a farmer in the Mississippi Delta, takes his produce to the Clarksdale farmers’ market. Mr. Wilbourn is a member of the Delta Fresh Foods Initiative. Photo by Brooke Smith.

According to a 2012 report from the Food Chain Workers Alliance (FCWA), almost 20 million people in the U.S. work in the food system – on farms and in food processing and meatpacking plants, warehouses, grocery stores, restaurants and food service establishments. The food system workforce is equal to one-sixth of the nation’s workforce, and the industries of food production, processing, distribution, retail and service collectively sell over $1.8 trillion in goods and services annually, accounting for over 13 percent of the U.S. Gross Domestic Product. What happens to food workers has an enormous impact on the economy and on consumers, food safety and public health.

Food workers comprise the largest group of employees in the United States. However, food workers are often paid very low wages and suffer from dangerous and hazardous working conditions. According to survey data collected in the report, 86.5 percent of food workers reported earning low wages, 57.2 percent of food workers reported suffering an injury on the job and 52 percent of food workers did not receive any health and safety training. Uyolanda Dickerson, a former warehouse worker in the state of Illinois, said, “I never made more than $200 a week and then had to pay $27 a week for health insurance.” She also had constant shoulder, back and leg pain. In January 2011, a 22-year-old Guatemalan immigrant was crushed to death in a machine at the tortilla factory where he worked. The Occupational Safety and Health Administration (OSHA) later found that if a simple required safety guard had been placed on the machine by the employer, Juan Baten’s life could have been saved. 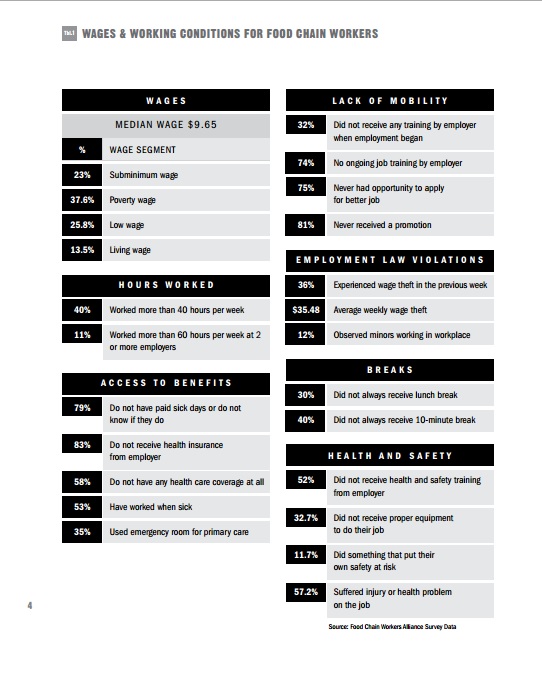 The fact that 79 percent of over 600 surveyed food workers reported not having or not knowing if they had paid sick days and that 53 percent reported going to work while sick is both a public health and food safety issue. Documented incidents have proven that some cases of food-borne illnesses were caused by food workers going to work while sick. In North Carolina, a worker at an Olive Garden restaurant tested positive for Hepatitis A, but had no paid sick days and could not afford to miss a day of work. As a result, 3,000 people in the community needed to be tested for Hepatitis A.

Ironically, food system workers suffer from high rates of food insecurity – almost one third of all food system workers experience very low to marginal food security. Furthermore, food workers rely on government public assistance – food workers use Supplemental Nutrition Assistance Program (SNAP) benefits, formerly known as food stamps, at double the rate of the rest of the US workforce. Walmart, according to Good Jobs First, has more employees on public assistance programs than any other employer in the U.S.

In addition, food system workers suffer from high rates of discrimination and low rates of promotions and mobility at the workplace. According to survey data collected by the FCWA, 81 percent of food system workers never received a promotion, and 75 percent never had the opportunity to apply for a better job. The data also shows that workers of color in the food system experience higher rates of wage theft than white workers. Fifty-seven percent of Latino workers, 27.8 percent of Black workers and 4.5 percent of Asian workers reported wage theft, while only 3.8 percent of White workers reported wage theft. For example, Elisha Wilson, a manager at a grocery store chain, learned that she made less than a white male counterpart with the same position. With help from her union, the issue was corrected and she received a $4,000 check for retroactive pay.

Immigrant workers make up a large percentage of workers in the food system. According to the 2012 American Community Survey, 18 percent of all food workers in the U.S. are foreign born. The FCWA survey data showed that more than half (56.8 percent) are foreign born – a discrepancy likely due to the fact that undocumented workers may be afraid to speak to government data collectors (like those of the ACS), and the fact that many Food Chain Workers Alliance member organizations have large immigrant memberships. Either way, it is clear that the food system relies heavily on these workers to produce, serve and sell the nation’s food supply. 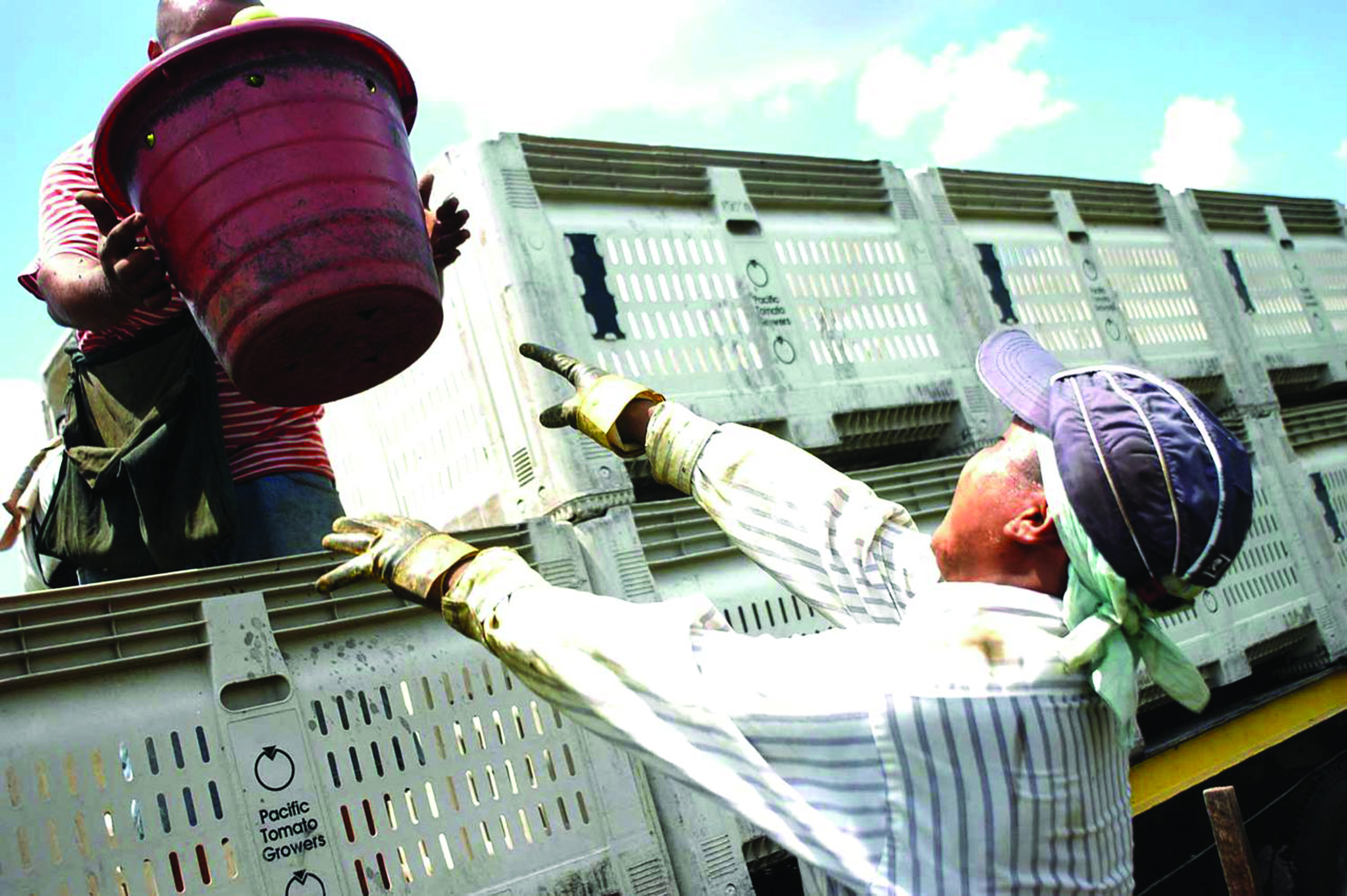 Workers in Immokalee, Florida are paid about $0.50 per bucket of tomatoes picked.

As consumers it is important that we support employers that not only provide us with local, sustainable and healthy food but also respect the humanity of their workers.

As New York Times food columnist Mark Bittman said, “If you care about sustainability — the capacity to endure — it’s time to expand our definition to include workers. You can’t call food sustainable when it’s produced by people whose capacity to endure is challenged by poverty-level wages”.