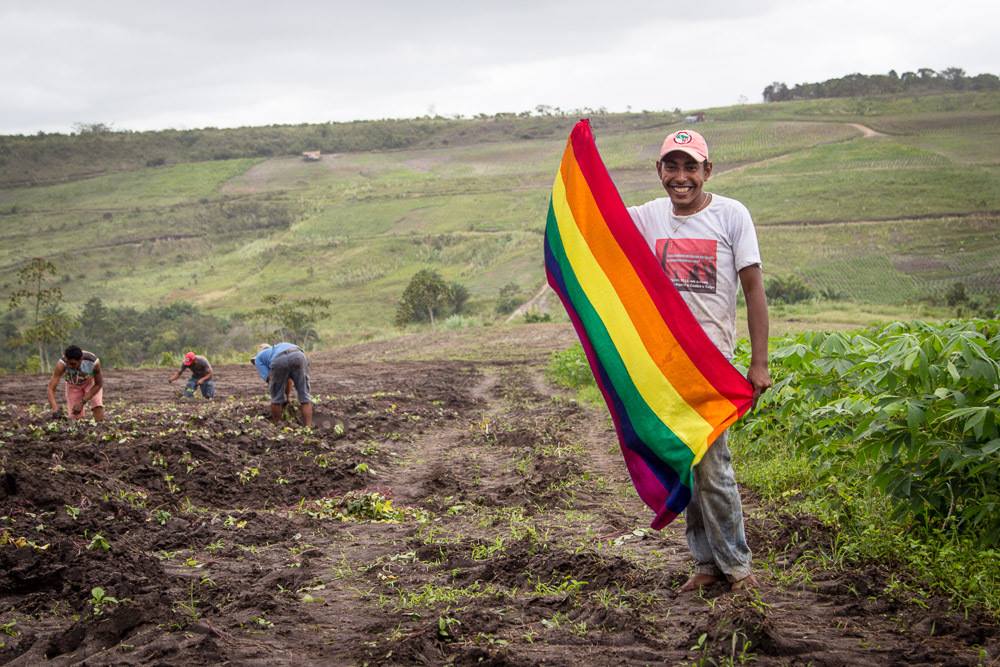 The Landless Workers Movement (MST) – the largest peasant movement in Latin America has added a new collective that will be dedicated to and directed by its LGBTQ+ members. WhyHunger had the opportunity to interview two members of MST’s LGBTQ+ Collective to learn about their internal process to create this new collective and what it holds for the future. This interview captures how LGBTQ+ individuals fought for recognition within the movement and how their organizing is enriching MST, helping it to reinvent itself and grow stronger. We edited this interview for length and clarity. The interview was conducted in Portuguese and the translation into English, in some cases, reflects the terminology used the interviewees.

WhyHunger: The LGBTQ+ Collective is now an organic part of the Landless Workers Movement. It has been five years, correct? Can you tell us more about the trajectory to get here?

Alessandro: The LGBTQ+ Collective got its start officially in August of 2015 in a seminar that was held at the Florestan Fernandes National School, but it was also the fruit of other events, dialogues,  with various expressions of LGBTQ+ people involved with MST across the country. For instance, during the last MST National Congress in 2014, we had a meeting with the participation of Transsexual [Transgender] representatives. However, it wasn’t until 2015 that we held an internal seminar to talk amongst ourselves about our place in the Movement, in the struggle. After the seminar we began the tasks of organizing LGBTQ+ within and across all the MST spaces and initiatives, like gatherings and marches. During that time, we started the process of formação (political education as part of the organizing). As part of our formação, we started a group study in 2016 made up of two LGBTQ+ members per region who would meet to identify critical questions for MST, resulting in the MST’s Agenda on Sexual Diversity which our collective presented in November 2016, during the National Directory meeting.  The National Secretariat began to study this agenda and approved the request for us to start sharing throughout the Movement. Later, at the National Coordination meeting in 2017, we gathered more than 40 LGBTQ+ members for the first participation of LGBTQ+ members as a recognized body within the Movement. At that time, it was determined that the Agenda on Sexual Diversity would be moved forward within the Movement as a part of the Gender Sector. It was only in 2018 that we officially became a collective of the MST with formal representation in state-level spaces of the MST.

How the Landless Workers Movement is organized 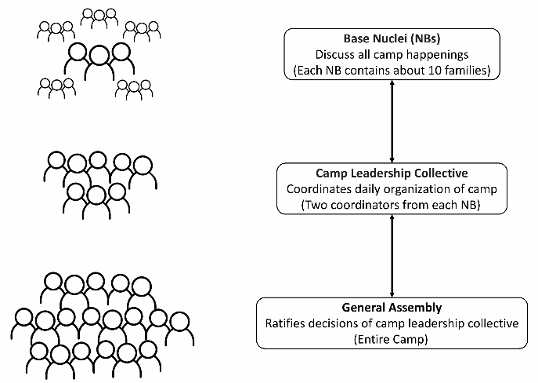 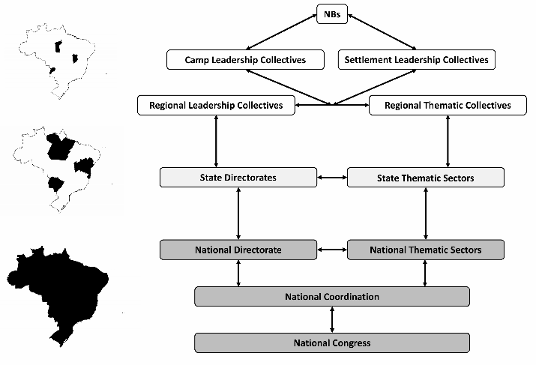 WhyHunger: We have been accompanying the evolution of this collective and we appreciate the opportunity to learn and share more about LGBTQ+ issues from the viewpoint of a social movement. How did this question of whether to form a LGBTQ+ collective within the MST start and how does it influence the perspectives of the organization?

Erivan: It is important to emphasize that MST is the largest social movement in Latin America. It is a people’s movement and within the movement, we have diverse social groups. We are mostly formed by peasant farmers, who tend to be (socially) conservative. So we asked ourselves: “How does gender identity have a place in a peasant movement? How many members of our peasant movement are extremely conservative?” We began by analyzing the level of political maturity of MST.  Our analysis shows that we — LGBTQ+ — have always been present in the building of this movement. As people, our bodies were always present, if not our full identities.

Meanwhile, the LGBTQ+ theme was not out in the open. At the beginning of the Movement, in the 90s when I joined, we would hear about cases of LGBTQ+ folks having difficulties fitting in. Slowly, we started understanding that even within the Movement, as LGBTQ+, we were experiencing oppression, prejudice and discrimination. At the same time, we began to realize that there were a lot of us in the Movement and that it was necessary for us to have a political debate around our experiences in this social movement that we helped to build. I remember that in a seminar on education that was held in Brasilia, 15 LGBTQ+ members were in attendance and we discussed among ourselves if we should grab the microphone and speak openly. However, following the saying “We cannot die before we are even born,” we decided against it concluding it would not be strategic. As time went on, we intentionally gathered as LGBTQ+ at strategic spaces. Alessandro and I are part of a generation that joined the movement at a very early age. We came in when we were about 12 or 13 years old, and through our history in the movement — even though we could be victims of a few verbal attacks or the butt of a joke — we stayed committed and continued to participate in strategic spaces in the Movement. Meanwhile, we were gaining ground [as a social group]. In the Brazilian state of Bahia, for example, LGBTQ+ members were able to enact policies and agendas regarding sexual diversity, even before the National Agenda period. The same thing happened in Ceará state. We began to realize that (sexual diversity) was a very important aspect of the struggle and that (LGBTQ+ peasants) basically helped to build this large social movement in Latin America. And so why were LGBTQ+ members still being excluded or still feeling oppressed? As we matured politically and deepened our own understanding, we decided that now was the time to start organizing around this debate. This was a very important step because it not only cemented the debate within our Movement, but it created an energy and discussion even outside of MST, if not more so, within other social movements.

These actions are the fruit of maturity and strength of the movement and demonstrate that MST can reinvent itself and it is the members that make it happen.

One of the main tasks we took on early on, while continuing to organize, was to develop a method of formação, which helped us to discover our political discourse in this debate. We were strategically continuing to learn and get familiar with the issues [of sexual diversity]. The first challenge was to interface [with the Gender sector] and to try and understand the debate held by women because it would have a direct relationship to our debate. LGBTQ+ members and women have a common enemy:  patriarchy. As a system of oppression and exploitation of women and non-gender conforming men, patriarchy directly impacts LGBTQ+ folks, especially trans folks. That was one of the main reasons we started developing the LGBTQ+ Collective.

The Difference Between Formação vs. Leadership Training

WhyHunger: You spoke about the formação component that you did not have initially but that was necessary. Could you give a few examples of that?

Erivan: That learning came from our need to grow. We were gathering and debating but only had a basic understanding about sexual orientation, gender identity and sexuality. We often didn’t really think about our sexuality as much as we just lived it. In the beginning we didn’t understand much about transsexuality [transgender]. For example, during one of the first learning exchanges, as the conveners of the gathering, we did not know a lot about transgender issues.  It was a trans man who attended this seminar that helped us begin to understand what transgender was. Some folks even exclaimed, “Wow! I thought there was only ‘viado’ (gay) and ‘sapatão’ (lesbian). What do you mean there exists trans men and trans women? What is that?” We had friends that were transgender but we did not have the understanding of the heavy load experienced by transgender people who, because of their gender identity or sexual orientation they are born with, suddenly do not see themselves for who they are, but for who society expects them to be. When he gave us this talk, he started to deconstruct this binary view we had. We began to understand and thought “we really need to study a lot about this” and so the encounter with that person was key in our development of the collective.

There is another element that I find interesting in our formação. That is how they have provided us with the opportunity to speak and to listen. It is in listening that we can elaborate and evolve our theory, not only based on our studies but also based on what we are hearing from folks and experiencing ourselves. For example, for someone who is trans but did not have the knowledge to understand their own sexuality, through this collective have the space to learn and to realize more about themselves. Many of us don’t come out to our family members first about our sexual identity. It wasn’t with my family that I first talked about being gay or transgender. It was within MST, in this collective space, where we would face prejudices and felt we could talk about it. Why is that so? Because we were helping to build the movement, we were helping to build MST even with all the contradictions. It was important to us that we participated in building MST, despite being a target of jokes or mocking. We exposed ourselves in order to push the debate forward. It is important for us to understand why the movement, as a collective, is the first space where we expressed ourselves and our sexual identity. Even when our families reject us, and the State doesn’t want us, because we are members of this movement, we shape it to be a movement that will also be of welcoming and in solidarity with LGBTQ+ folks. And in our trainings, in those gatherings, we never held back in telling our life stories. It is a structural element of our trainings and it is offered to any new member and that is how we implement this element of listening.

WhyHunger: What are the expectations of the LGBTQ+ collective for the future?

Alessandro: Well the vision that the collective has analyzed has three paths. As of now, we have been able to have debates about being welcoming within the movement, to allow for the inclusion of the LGBTQ+ community in this fight for land — asserting that trans folks have a right to also be on the land and fight for the land and not just live as a sex worker or on the streets. We have also come to understand that our path must be as a collective — we must organize as a collective. Our challenge now is, yes, to see the collective as the space to welcome LGBTQ+ members, but also to continue to hold the debate within the movement as a whole. For the next couple of years, our challenge is not to just hold a LGBTQ+ seminar but encourage the debate on sexual identity throughout the movement so that LGBTQ+ voices are a part of determining our future as a movement.  LGBTQ+ identity it is not just our struggle, but a part of the struggle that defines the whole movement. The third element is to join the fight with the broader LGBTQ+ movement that we are building nationally. We are contributing to the organization of a Popular National LGBT Movement now, in this political climate against Bolsonaro. We have already started to develop within La Via Campesina a seminar that we are hoping will be held this year. We are taking advantage of this pandemic to have weekly meetings and we are producing a publication with other members of the organization. We are also producing a book on the five years of the collective that describes the history and introduces new questions to the conversation.  It should be ready by the fall.