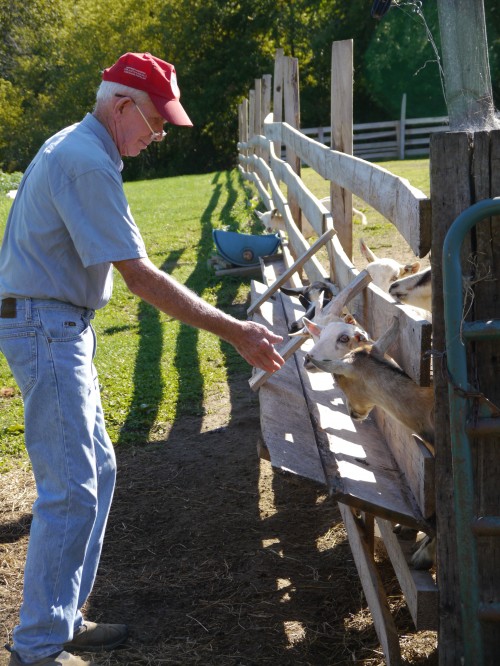 John Kinsman, a dairy farmer and loving husband and father from the hilly Driftless region of Wisconsin was an unlikely and unassuming giant in the global struggle for justice and food sovereignty. But a giant he was, touching the lives of countless people around the world in his 87 years of farming, protesting, strategizing and building relationships and solidarity. John died peacefully yesterday at 87, on Martin Luther King, Jr., Day, surrounded by family on his farm.

John grew up in the Depression, bought a farm sixty years ago with his wife, and converted to organic production after being hospitalized for chemical poisoning. In the late 1960s, he helped to run a summer exchange program started by the Freedom Riders between families in Wisconsin and Mississippi. He was instrumental in the fight against rBGH (bovine growth hormone), initially drawing attention to the issue by protesting alone in front of the University of Wisconsin Madison dining hall with a hand-lettered sign. John founded Family Farm Defenders in 1994, and was a proud member of La Via Campesina, the international peasant organization, traveling the world to protests and meetings, to work for justice by building relationships and solidarity.

Beyond his biography, there were his stories. I only met John in 2009, and so most of what I knew about his life was through his telling of it, through his incredible, hilarious and inspiring stories.

He had stories of sometimes dangerous moments in the civil rights era in Mississippi; of travels with José Bové, the well-known French farmer and activist; of farm visits with peasants on every continent; of moonshine; of bus rides in Africa; of the great generosity of his Amish neighbors. His stories were of prejudice turned on its head; of pigeonholing politicians to make them listen; of unlikely tactics succeeding. These would often end with a punchline and a mischievous, delighted laugh at how justice had unexpectedly prevailed or how the improbable had worked out, whether it was an acknowledgement from the buttonholed politician or the free community meal his town’s churches had recently pulled off from entirely local foods–in Wisconsin in February. 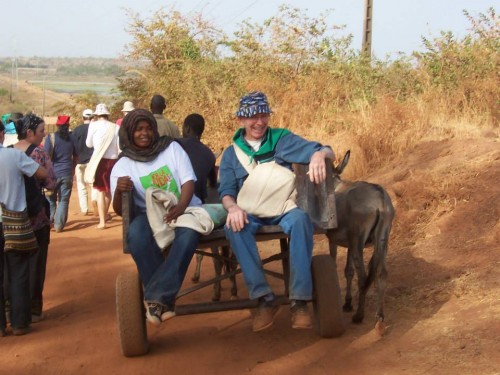 His stories–and his life, it seemed to me–were bound by a common thread of humanity. John saw the humanity in his fellow person more than anyone I’ve ever known. Every new meeting was an opportunity to share and learn, to discover commonalities–whether or not that included language. John’s friend and former WhyHunger staff Christina Schiavoni wrote today about being with him at Nyeleni, the 2007 international forum on food sovereignty in Mali. “He could have the most in-depth, profound, heart-to-heart conversations with others in the struggle, even without single word of common language,” she wrote, recalling him miming milking udders in the air and saying “I’m a dairy farmer.” Family Farm Defenders Vice President and fellow dairy farmer Joel Greeno told me, “John would go off to Indonesia or someplace and we’d ask, ‘Were there translators?’ He’d say, ‘Oh, sometimes.’ ‘Sometimes?! How’d you communicate the rest of the time?’ And John would laugh and say, ‘It’s easy–laughter and beer.'”

His last trip as an activist was last March, when he and other FFD farmers marched with the Coalition of Immokalee Workers on part of their two-week, 200-mile March for Rights, Respect and Fair Food. Farmers and farmworkers haven’t been traditional allies, but John’s life was one of not caring much for lines of tradition. As he had done so many times, he marched and told stories and made new friends and laughed through it all. After the march, John joined the second assembly of the US Food Sovereignty Alliance, sharing his wisdom and connecting the struggles of small farmers with farm and food workers, urban communities of color, fishermen, indigenous peoples, religious leaders and many others.

John inspired literally countless people throughout his life, building the movement for justice both though his work and through his example. We at WhyHunger are grateful to have known his brilliant spirit and his boundless energy and are privileged to have called him our friend. He will be greatly missed.

To read more about John’s life, see www.familyfarmers.org. Read additional tributes from around the food justice world at “Tributes to John Kinsman.”