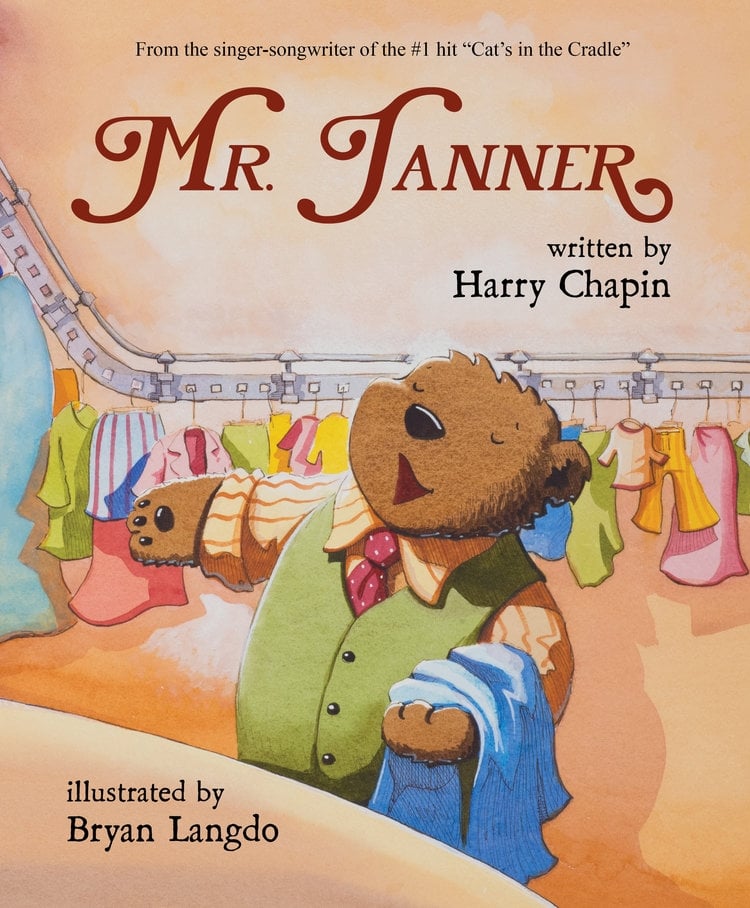 Last month, Ripple Grove Press released their latest children’s book, Mr. Tanner, an illustrative adaption of Harry Chapin’s iconic 1973 song, “Mr. Tanner”, with a portion of proceeds benefitting WhyHunger. Harry Chapin was originally inspired to write the song after seeing a mediocre review of a baritone singer in the New York Times in the early 1970’s. The children’s story further draws on this inspiration, depicting a story of a dry cleaning bear, Mr. Tanner, from Dayton, Ohio, who dreams of changing his career to become a professional singer. Every day, Mr. Tanner greets customers by singing in his baritone voice. After being encouraged by friends to sing professionally, Mr. Tanner takes a chance and travels to New York City to try out his dream. Similar to the original story that inspired Chapin, the NYC music agents and critics aren’t interested in Mr. Tanner’s baritone voice and, feeling defeated, the bear returns back to Ohio to continue dry cleaning. However, he continues singing to his customers and friends, because singing is what brings him the most joy in life.

We spoke to the co-owner of Ripple Grove Press, Rob Broder, and illustrator of Mr. Tanner, Bryan Langdo, to gain a sense of what working on the children’s book meant for them:

How has working on this project, knowing WhyHunger’s mission and Harry Chapin’s involvement (as a co-founder of WhyHunger and lifelong activist), been different for you compared to other book projects you’ve worked on?

Rob Broder: It’s definitely been a different experience working on this book. Taking song lyrics and laying it out was a fun project. Thankfully Harry’s songs tell such a nice story, so breaking the spreads out can easily. Bryan’s vision helped too.

Bryan Langdo: Working on this book, I felt a lot of pressure to get it right. It’s obviously a well-loved song, and I wanted to make sure I did it justice. And honestly, I felt honored to be a part of something so much bigger than me.

What do you hope children take away from this book?

BL: I hope it shows kids that it’s okay if things don’t work out the way they want, or if they don’t come in first. We often focus on people who are at the very top of their fields. But there are plenty of singers, actors, writers who might not be celebrities, but are still very successful, and more importantly, happy.

How do you think this book helps children understand the challenges when following their passions and the importance of finding joy from within?

RB: I think this book can open a discussion with your child on what makes them feel alive. What do they truly enjoy to do? Even though in the story it says Mr. Tanner “never sang again,” he does. Because he can’t help it. It’s inside him to sing and it makes him “feel so good.” And at the end, we can see him singing in his shop, and his customers are outside listening to him and smiling. So you can choose how to take criticism, whether you want to listen to it or not, but at the end of the day you should follow your dreams and passion.

BL: It sends the message that you should follow your heart and keep doing what you love, even if it doesn’t wind up being your job.

What about Harry Chapin’s “Mr. Tanner” compelled you to release the book under Ripple Grove, and why did you decide to donate a portion of the proceeds to WhyHunger?

RB: At Ripple Grove press we are always looking for that next story. A story that really captures a moment. And I have been listening to “Mr. Tanner” for decades. And one day it just struck me what a wonderful story this would be for children. The message of the story really spoke to me. So I reached out to the Chapin’s and asked them if they would be interested in making it a picture book. We also started Ripple Grove Press to give something back, so when a childhood friend told me he’s on the board of WhyHunger, it was a perfect match.

Why did you choose to illustrate Mr. Tanner as a bear?

BL: That was Rob’s idea. He called and said he was going to send me a manuscript and that I should picture the main character as a bear. After reading through it, I knew that was a great idea. If Mr. Tanner had been illustrated as a person, the book might have felt too sad. Plus, he’d be an adult then, and kids have a much easier time relating to animals than they do adults.

How did Harry Chapin’s lyrics shape your vision for the book and what was your process in translating that onto paper?

BL: The song functions really well as a story, so for the most part, the process was just like that of any other book I’ve worked on. I didn’t want to hide the fact that it was a song, though, so I made sure the three choruses stood out. The chorus spreads take a break from the narrative and feature Mr. Tanner “super-imposed” onto background images with dry-cleaning conveyors/music staves running behind him.