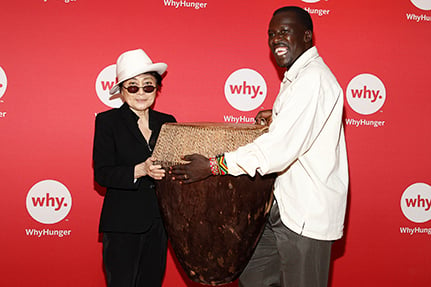 WhyHunger ASCAP Harry Chapin Humanitarian Award Winner Yoko Ono Lennon is presented with a drum by musician, activist and Hope North founder Okello Sam for her lifetime commitment to activism and the fight against hunger. Photo by Mark Von Holden.

I remember as a young man marching in numerous civil rights and anti-war marches. The music was enlivening, inspiring and kept us focused on the cause, not any danger that might arise. When I went on the March on Washington in the summer of 1963 numerous artists such as Peter, Paul and Mary, Joan Baez, Odetta, and Bob Dylan touched our spirits and moved our hearts. Eventually, we moved the president and Congress, and the law of the land actually changed. Since then I have interviewed more than a hundred artists on my radio shows and worked with dozens more in the battle against hunger, poverty and injustice. Music has a power unlike any other medium to move people to action and the reflection needed to make the actions meaningful.

Harry Chapin, the author of “Remember When the Music,” was not only a songwriter and dynamic live performer. Harry and I co-founded WhyHunger in 1975, and it has continued for 39 years despite his tragic death in 1981 in a car accident. Every other concert Harry performed was a benefit to fight hunger. No one else in the music business had ever been that generous. That was only one dimension of Harry’s involvement as a hunger champion. He gave numerous talks at colleges and high schools, and he was the leading force behind the establishment of the Presidential Hunger Commission under President Carter from 1978 to 1980. He lobbied numerous senators and members of Congress to secure its passage, and then attended every meeting. He also worked hard to influence other artists, like Kenny Rogers, to join the cause. Over the years our organization, WhyHunger, has created numerous programs and organizations that have helped connect millions of hungry people right here in America to nutritious food and changed the conversation from charity as the answer to economic and social justice as the true direction. The root cause of hunger is poverty and the root cause of poverty is powerlessness. Charitable hand outs are appropriate for emergency situations but do not promote self-reliance and food justice.