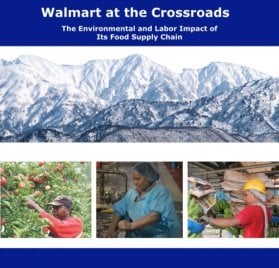 WhyHunger ally, the Food Chain Workers Alliance (FCWA), released a new report that exposes major discord between Walmart’s labor and environmental claims and the reality in its food supply chain and provides recommendations for improvements. Findings in the report show that Walmart’s commitments to improving these standards have not translated to actual improvements in working conditions or the environment across most of its food supply chain.

The report, “Walmart at the Crossroads: the Environmental and Labor Impact of Its Food Supply Chain,” looks closely at Walmart’s impact on farmers and at the labor and environmental records of 22 major suppliers of popular food items – suppliers include Dole, Taylor Farms, Tyson, and United Natural Foods, Inc. According to Walmart’s “Ethical Sourcing” standards, all suppliers and their manufacturing facilities at a minimum: “must fully comply with all applicable national and/or local laws and regulations, including but not limited to those related to labor, immigration, health and safety, and the environment.”

But the report finds that Walmart has failed to enforce supplier compliance with its code of ethics around labor practices, environmental sustainability, and sourcing local food. The report finds that workers in Walmart’s stores and in its food supply chain endure a slew of labor abuses, including gender and racial discrimination, unfair treatment of immigrants, low pay, violations of freedom of association, and even workplace accidents and fatalities.

Labor Walmart’s labor standards require: “All labor must be voluntary. Slave, child, underage, forced, bonded, or indentured labor will not be tolerated. Suppliers shall not engage in or support trafficking in human beings.” Despite these standards, the report found:

Local Food and Small Farmers In 2010, Walmart announced that by the end of 2015, it would sell $1 billion worth of local food sourced from 1 million small and medium farmers, and increase the income of the small and medium farmers it sources from by 10 to 15 percent. Called its “Heritage Agriculture” program, Walmart also made several country-specific commitments to local and small farmers, for example, in India and China.

Walmart is the world’s largest retailer and one of the most highly valued publicly traded companies. Foodstuffs currently account for over half of Walmart sales, representing roughly 25% of all groceries sold in the U.S.

“Walmart, today, could use its power and influence to improve labor conditions in its supply chain,” says Jose Oliva, Co-Director of the FCWA. “Walmart could enforce its code of conduct and instruct United Natural Foods, Inc., Taylor Farms, and Gerawan Farming that they need to respect their employees’ right to organize and collectively bargain. Walmart could require transparency in its supply chain to prevent the use of forced and slave labor, especially in the Asian seafood industry. And Walmart could pay $15 per hour and provide full-time hours to its own employees.”

Read and download the full report here, and take action by signing a petition asking Walmart to make changes that will improve the environment and the lives of farmers, workers and communities!