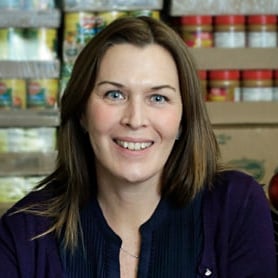 This post was originally published on the Give Healthy blog. In order to examine the concept of food justice and the emergency food system, Give Healthy spoke with Noreen Springstead, Executive Director of WhyHunger. Since 1992, she has worked for food justice and contributed to the organization’s mission of developing, supporting and replicating grassroots solutions focused on self-reliance and empowerment to end hunger and poverty. Below is a Q & A where she gives her perspective on “Give Healthy.”

1. What does the term “Give Healthy” mean to you?

Noreen: When I think of the term “Give Healthy,” I think of living healthy, so for me the core of “Give Healthy,” is nutritious food and exercise. The correlation around the work of solving hunger is that all people should have access to nutritious food. Good food and healthy food should be the evolution of the American food drive, and to take that one step further we should be moving toward establishing that food is a universal human right.

2. What do you see as the connection between hunger and health?

Noreen: What we’ve seen at WhyHunger is that there is a deep important connection between hunger and health, especially within low-income communities. There is a prevalence of fast, cheap, non-nutritious food in low-income neighborhoods. We’ve also observed the prevalence of processed food going to food banks. On one hand, its helps to alleviate hunger, but on the hand, it’s creating other health problems such as diabetes, obesity and heart disease. This paradigm needs to be changed. I’m excited to share that our Communications Intern Cataydra Brown, who is currently a sophomore at John Jay College of Criminal Justice, has done research at the intersection of food access, race, and class, ultimately questioning how someone’s socioeconomic status and race determines the quality of food that they’re exposed to in their neighborhoods. For example, in her research she examined Jamaica, Queens, which has a household median income of approximately $45,000, and 55% African-American vs. TriBeCa, New York, where the household median is $203,000 with 3% of African-Americans. She found that within a 20-block radius, Jamaica had 19 fast food restaurants – which included McDonald’s, Burger King, Wendy’s, Pizza Hut, etc., and no establishments that served fresh fruits and vegetables. However, in TriBeCa, there were just 2 fast food establishments within 20 blocks and a multitude of places that served organic fruits and vegetables. That just does not exist in a predominantly minority, low-income areas.

3. What trends have you seen in food banking around sourcing healthy food?

Noreen: There are a lot of food banks evolving their food sourcing and putting a premium on change in the form of nutritious food. For example, we are seeing more local farmers producing fresh food for food banks and putting nutrition front and center. WhyHunger is helping to support food banks that are transforming the emergency food system into one that prioritizes health. A couple of great examples are our friends at the Community Food Bank of Southern Arizona and the Santa Barbara Food Back in California. Increasingly, like-minded food banks and community organizations are banding together in an effort WhyHunger is involved in called Closing the Hunger Gap, to learn best practices from each other and expand their thinking of what the emergency food system should look like.

4. How do we build a food system where everyone has access to nutritious food?

Noreen: We need to look at the system through a social justice lens. We need to look at everyone from the workers who pick the food to the workers who serve the food in our restaurants. The food system is built on exploited labor. Economic justice and fair livable wages are the basis of building a food system where everyone has access to nutritious food. WhyHunger is working to change the narrative from food charity to food justice and exploring how to establish food as a basic human right.

5. What do you mean by the term food justice?

Noreen: Food justice explores both intersections and opportunities between hunger and racial justice, environmental justice, economic inequality and health equity. Food charity is the model we need to change, because while it serves an immediate need for people, it doesn’t solve or end hunger in the long-term. Food justice addresses the deeper poverty at the root of hunger.