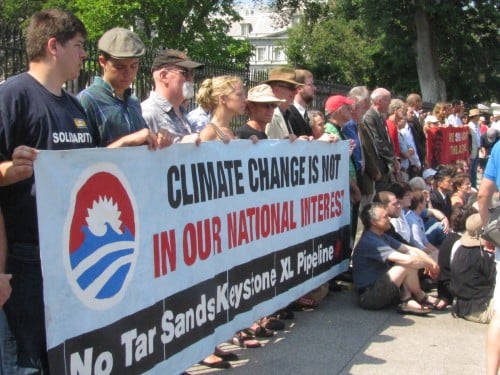 On the morning of August 20th, I spent 53 hours locked up in Washington, DC after being arrested for participating in a non-violent civil disobedience action at the White House. Along with 65 other protesters, I sat in front of the White House protesting the climate changing Keystone XL Pipeline that President Obama is deciding upon right now. Unlike other decisions that must go through a contentious Congress, the decision to allow the building of this pipeline is President Obama’s alone. The Keystone XL Pipeline will bring an intensely carbon-producing oil from the tar sands of Alberta, Canada through the US to the Gulf of Mexico, destroying farmlands, watersheds, indigenous lands and adding dramatically to climate change. Read all about the issue, the demonstration and watch a video produced by Amy Goodman of Democracy Now.

After being arrested (at 11:30 am on Saturday), hand-cuffed, put into a paddy wagon, brought to the US Park Service jail, processed and fingerprinted, I was put into a tiny cell with about 20 other women. Shortly thereafter 6 of the women, all from the DC area, were sent home; the rest of us were considered a “flee risk”, detained, hand-cuffed again, shipped in another paddy wagon and were sent to the DC women’s lock up a short trip away. There we 14 women protesters, all white women ranging in age from 19 to 65 from 14 different states.  We were put into a cell with 6 women of color, one Latina and 5 Black women, held on a range of domestic violence violations. We 20 women stayed in that 15’ x 35” cell until 7 am on Monday morning. The cell had no bedding or beds whatsoever, just a cement floor, a toilet, florescent lights permanently on, and bone-chilling air-conditioned temperatures. We were mostly dressed in sun dresses or shorts from the hot-weather sit-in and slept on the floor shivering until exhaustion took over. I don’t think I got more than 2-3 hours of sleep over the 53 hours of incarceration.

Every 12 hours we were served processed cheese sandwiches on white bread plus water (and twice we got a miserable fruit punch) but the silver lining or rather wrapper was that the sandwiches were packed in Saran Wrap and we used that to wrap our bare arms and legs for insulation. On Sunday afternoon, some additional clothing was brought to us by loved ones and we shared the few warmer clothes we got with the 20 women. We were freezing the second night as well despite the slightly warmer clothes. 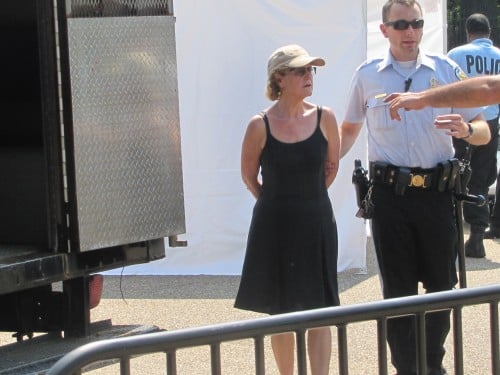 From the beginning we protesters used our collective organizing skills to keep up our spirits, exercise and have as much fun as possible. We did frequent yoga and Pilates sessions, played lots of different games, told stories, shared personal information, especially how we got involved politically, how we fell in love, and lots of silly stuff as well. We kept busy, choose a representative to consult with our (volunteer) lawyer and kept watch over each other, caring for those who were ill (one protester had a migraine requiring a trip to the hospital) or scared. The non-protesting women commented on how great the experience was and how afraid they had been of being locked up. One of the local DC women was shocked that none of us had met prior to the arrest because we worked so well together and shared so much in common. What she was observing was activist culture in action. It was a White version thereof but I am quite sure that women of color activists would find all of this very familiar as well. The race difference–all the protesters were white and all of the other women, both in this cell and later at the Court lock up, were women of color—was totally predictable and shameful. I know that I went into the situation with all of my privileges in hand: race, age, class. I didn’t worry much about my personal safety whereas my sister inmates of color had every reason to fear for their safety at the hands of a racist system and guards who might take advantage of their vulnerability. But even with those privileges it was pretty hair-raising for me.

At 7 am on Monday morning we were again handcuffed, put in a paddy wagon and driven to the DC criminal court house, shackled as soon as we got there and put into another holding cell with 2-3 other women changing from time to time. The noise from women in the other cells and the clanking of cell doors and keys was deafening and rattling. We worried that we’d be kept yet another day. Again the cold was intolerable but this time we had metal benches to sit on, much warmer than cement. We exchanged info on our favorite environmental books and films and strategized about how to conduct ourselves in court and consult with legal counsel.

At 4:30 pm on Monday we were released and told to go home, charges were dropped. We all hugged and kissed, walked out of the lock up (shackles finally removed), saw the 40 men in lock up and heard them cheer us as we left, went into the building and were met by the support squad ready with food and drink for us to enjoy. Lots of cheers, lots of hugs, very little corporate media though lots of alternative media. (Note: the NY Times had an editorial on Sunday, August 21st, opposing the Keystone XL Pipeline). The men had it rougher if warmer. They were separated into 2-person cells with almost no visibility other than a slot. They had trouble communicating between cells. The two tiered bunk beds were metal with no mattress and the top bunks were so close to the ceiling and the fluorescent lights that they reported how hard it was to be up there. They had no A-C and were sweltering. What’s more, they were denied the possibility of the camaraderie that we women so enjoyed. 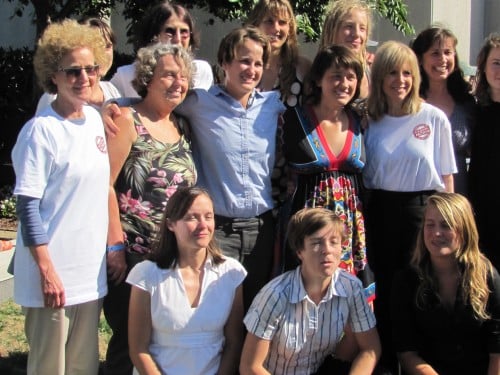 We all felt it was worth it to step out and declare our opposition to policies that are killing our planet. We all felt that we contributed what we could to call out to our people and ask them to join us, to risk arrest, to give of themselves in any way they can to dial down the advancing climate change that threatens our lives and especially the lives of our children and grandchildren.

A couple of days before the sit-in, Lew and I visited our 20-month old grandson, Elon, and our son and daughter-in-law who live just outside DC. Elon has a wonderful life and is being raised with an enormous amount of love and care. He is a happy boy, laughing and smiling his way through each day. What will the planet hold for him and all the other children? Seeing him before the sit-in helped to strengthen my resolve. I cannot stand by and watch our planet deteriorate without being part of a movement of resistance and, hopefully, change.

Mostly I work on food democracy issues, including the non-sustainability of our present food system (annually contributing 1/3 of all greenhouse gases—more than personal transportation). The issue of the Tar Sands Oil Keystone XL Pipeline ignited my interest and determination because I wanted to see the environmental movement become more militant, involve more people and stand up to the oil, gas and coal industry. We need a “Manhattan Project” to develop renewable energy, not another source of carbon-producing energy. We need to cut back our use of energy and make renewable energy sources locally produced and distributed. We need a population that is willing to stand up to the corporations and their puppets in government– in the Congress, in the States, in the Cities and in the White House—to invest in renewable energy and slow down the rate of climate change.

Please consider coming down to DC to participate in the sit-ins and/or the big culminating demonstration on Sept 3rd. The sit-ins and arrests will be going on every day through Sept. 3rd. While the people who protested on the first day of the action (August 20th) were detained for 53 hours (and were told repeatedly by the prison guards that it was at the request of “people VERY high up”), all other protesters were detained for under 8 hours and released the same day. The plan is to have the largest rolling sit-in on the environment in history. If you can’t come down, please follow the issue and tell your friends. Do it for yourself and those you love and all those who will come after us. It feels great to step out and voice your resistance. The planet cannot wait for us to summon up the courage. We need to do it now. Thanks for reading this.

If you are moved to making a contribution, you could join the Brooklyn Food Coalition or contribute on the Tar Sands Action “Stop the Pipeline!” website.