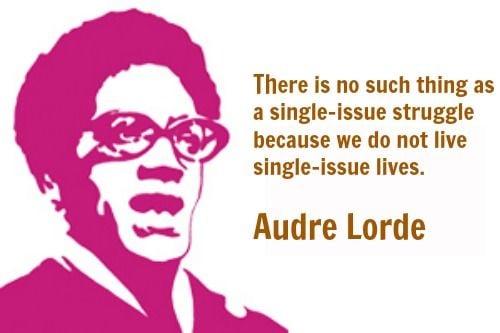 For the next issue of the Nourishing Change newsletter, we are discussing intersectionality in the food system. Therefore, we spoke to two of our partners to discuss the work they are doing and how they work at many different intersections.

The Nourishing Change newsletter is a forum for sharing information and resources to enrich our conversations and efforts to organize for the most basic of human rights – the right to food.  The content of these newsletters seeks to illuminate the particular conditions that, when all are realized, define the right to food:  food that is accessible both physically and economically; food that is adequate for optimal health and nutrition; food that is available through means that promote self-determination and dignity; and food that is produced and consumed with environmental sustainability front and center.

Join us as we work with our partners — emergency food providers, food access organizations, community health organizations and other grassroots and national allies — to transform the charitable response to hunger in the U.S. into a more equitable and inclusive social justice movement that recognizes nutritious food as a human right. If you’d like to subscribe, click here.

A Conversation with Diana Robinson at Food Chain Workers Alliance 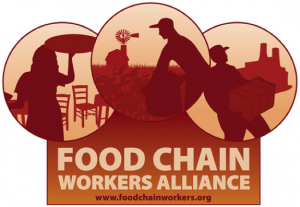 The Food Chain Workers Alliance believes in a truly sustainable food system, one that can provide healthy and locally made food, and that has the potential to lift up communities, workers, and our shared environment. A food system that is democratically controlled by communities would produce food that everyone needs to lead productive lives. To encourage a vibrant and sustainable local economy, food enterprises should be cooperatively owned. Taken together, this would lead to jobs that have dignity, livable wages, and meaning for workers, and would create a food system that works for all.

Our food system should:
1. Be democratically controlled
2. Be managed by more cooperative ownership, less private ownership
3. Provide local, healthy, sustainably produced food that is beneficial to both people and the environment.
4. Allow all to work with dignity, livable wages and meaning.

How does the Alliance support working at these different intersections?

We see value in making connections around the food system from Health, Environment, Agriculture, and Labor. To truly transform our food system we need to all work together. This is why the FCWA is a founding member of the Heal Food Alliance, we see the importance in building a food movement that addresses all the issues that affect our food system and ensuring the marginalized people are the leaders. In addition, we view the Good Food Purchasing Program as a tool to also begin transforming regional food systems to respect workers, the earth, and animals. Most importantly the FCWA brings workers together from across the food system to build power and create solidarity.

The main audience of the Nourishing Change newsletter is food access organizations. Any initiatives or organizations that you would like to highlight that are doing good work on the ground that these organizations could connect with?

Yes, we urge everyone to join us for actions and events during International Food Workers Week November 19-25, 2017. It’s an opportunity for allies to join with food workers and support their campaigns. You can learn more about FCWA and its members at foodchainworkers.org.

The Poor People’s Campaign is coming at its goal from many different intersections, especially the state of poverty, militarization and racism in the U.S. Why is it important for this campaign to be working at these intersections? How are they related? How does this resonate with MLK’s vision?

During the 1968 Poor People’s Campaign, Dr. King spoke of the “giant triplets” of racism, militarism, and poverty as three interconnected evils that had to be addressed together. He knew that racism was linked to poverty and both were linked to militarism, creating an interconnected system that primarily harms poor people. Today we have added environmental destruction to Dr. King’s triplets — making “four horsemen” of structural evils in our society today. Today’s Poor People’s Campaign: A National Call for Moral Revival agrees with Dr. King’s assessment — that these are moral issues, that we need a “revolution of values” in this country, and that without resolving all of these issues together, we cannot resolve any one of them. We seek not to commemorate Dr. King’s work — but to complete it.  In order to successfully overturn the “four horsemen,” we must focus on the leadership and the unity of the poor.  Every successful social movement in history has been led by those most impacted by the issues — and the people most impacted, most hurt — by poverty, systemic racism, the war economy and environmental destruction — are poor people of every race and background.

Poverty, racism, the war economy, and environmental destruction all come from an economic system and public policies that benefit rich people and don’t benefit poor people — they’re the results of what we could call a longstanding “rich people’s campaign.”  Racism preferences white people over people of color and keeps people divided in a system of “plantation politics” that is deeply rooted in American history. The poor disproportionately suffer from the effects of climate change and environmental destruction even though they have the least say in environmental policies. And the war economy (along with the incarceration system) takes precious tax dollars and spends them on war (which hurts poor people in other countries) rather than building up our communities and providing for food, healthcare, housing, and education for our people. Dr. King noted these connections in his famous “Beyond Vietnam” speech in 1967. The poor suffer the most from this system and their integral place in it also means that they can be what Dr. King called “a new and unsettling force in our complacent national life.”

How have you seen organizing across intersections occur? What strategies do you use to organize across the country across all these different issues?

The original Poor People’s Campaign really worked across intersections — at the time it was unheard of — truly groundbreaking — for poor people of all races — poor blacks, whites, Puerto Ricans, Mexicans, Indigenous people and others to come together and begin to see their common cause.  Today, the Poor People’s Campaign: A National Call for Moral Revival is working nationally to build what Rev. Dr. William Barber calls a “fusion moral movement” across lines of division, different geographies, different issues, and different facets of the “4 horsemen.” Rev. Dr. Barber’s work organizing the Moral Mondays movement in North Carolina — which drew national attention and won significant victories — helps us know that such a movement is possible. People from all backgrounds — black, brown, and white; north and south; urban & rural; gay and straight; with more & less money; employed & unemployed; across generations; of many faiths — we can all come together to see OUR common cause.  One key approach is to help people focused on different issues realize that the different struggles they are waging (against anti-immigrant policies; against policies of white supremacy; against policies that deny healthcare; against policies that attack union rights; against policies of voter suppression) — they all have the same opponents. As Rev. Barber recently said at the Chicago Mass Meeting of the Poor People’s Campaign, “If they [our opposition] are cynical enough to be together, we’d better be smart enough to come together.”

Food Justice looks like communities exercising their right to grow, sell, and eat healthy food.  There are many committed to ending hunger, building community, and working for sustainable food and farm systems. In what ways could the campaign align or has the campaign aligned with food access organizations and food justice organizing happening on the ground?

There is plenty of food in this world and if we made healthy, sustainable food a priority — the way we make war and profits a priority — we could easily end hunger.  The Poor People’s Campaign: A National Call for Moral Revival sees food as a human right and a moral issue. It is immoral for a few people to have so much wealth — and to waste food because to give it away would not be profitable — while their brothers & sisters are hungry. Having enough decent food is one of the primary issues faced by people living in poverty — along with healthcare, housing, living wages, and education. The Food Bank of the Southern Tier in New York State was an early endorser of the Campaign. We see them as a key institution in organizing people to be part of the Poor People’s Campaign. Right now, in this economy, food banks are absolutely necessary — but instead of just being charitable organizations that help the less fortunate, they can also be places where poor people come together and get involved in building a social movement so that everyone can have healthy food for their families. Like the Black Panther’s free breakfast program, we know that when we can both provide for the community’s immediate needs AND use that as a tool for movement-building, we have a really powerful model. When we formally launch the Campaign in December, we will have clear ways for food justice and food access organizations to join the Campaign and be involved in their states — and throughout the Campaign we will be amplifying the “plight, fight, and insight” of those most impacted by poverty, racism, the war economy, and environmental destruction — and working to scale up the good work that is being done by grassroots organizations across the country.  Organizations fighting for food justice are on the front lines of this struggle and by coming together with many others working on all of these interconnected issues, we can end the evils that Dr. King diagnosed fifty years ago.