hunger in the news 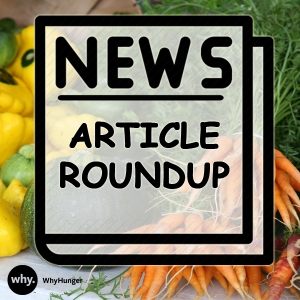 Below are our latest staff picks. Happy reading!

1. New York Times: Puerto Rico’s Agriculture and Farmers Decimated by Maria
Hurricane Maria has had devastating effects on Puerto Rico’s agriculture, a historically central part of the island’s economy. The magnitude of damages coupled with outdated infrastructure has left many famers struggling to recover.

2. Fast Company: How Climate Change is Making Hunger Worse Around the World
Based on new research from the Global Food Security Index about our natural resource supply and subsequent resiliency in the case of a natural disaster, it has become clear that climate change has a drastic effect on hunger worldwide.

3. In These Times: Racist Blowback Against Colin Kaepernick Isn’t Just About Him: It’s Aimed at Black Resistance Itself
The backlash towards Colin Kaepernick’s gesture to put a spotlight on unjust police practices has sparked a variety of reactions on a national and even global scale. This article looks at how these negative responses can be viewed in relation to Black resistance as a whole.

4. New York Times: How to Win Against Big Soda
A rise in serious health conditions such as heart disease and Type 2 diabetes have drawn attention to the consumption of sugary drinks. Cities around the country are laying out a blueprint on how to win against big soda and take more control of our food system.

5. Common Dreams: Yes, Half of Americans Are In or Near Poverty: Here’s More Evidence
Between faulty fact checking and out-of-date statistics, the poverty rate in the U.S. has been underrepresented. As expenses rise and wages remain stagnant, the “American Dream” is becoming even more out of reach.

6. The Washington Post: Oh Snap! It’s Been 40 Years Since the Food Stamps Act
40 years ago, the SNAP program was created in an attempt to reduce hunger on a national level. Today we can celebrate all of its success, much of which has remained out of the public eye. The bottom line is, SNAP works.

7. Toward Freedom: Starved of Justice and Sovereignty, Social Movements Fight for Way Out of Global Food Crisis
With increasing attention and action from small farmers and rural social groups worldwide, as well as new levels of organizing, the food justice and sovereignty movements are making some serious progress.

8. Buzzfeed: Black Farmers Grapple With a Changing Economy
Many rural Black farmers in Michigan and beyond are struggling to make ends meet as salaries grow increasingly uneven and family farms disappear.