This week, we’ve been coming across articles on food and farmworker justice in the news. Here are a few we recommend…

Poultry workers and food-safety groups are fighting back against proposed new rules that could increase poultry processing line speeds by 25 percent, from 140 birds per minute to 175. The USDA’s proposed plan intensifies the already prevalent threat to worker safety, evident in cases of the repetitive motion injuries caused by deboning chickens at high speeds. Consumer safety is also put at risk, as one of the new rules would reduce the number of federal inspectors and replace them with untrained plant employees. According to the Washington Post, the National Chicken Council has increased their lobbying spending by five times since the USDA began working on the proposal. Read more about this issue on The Washington Post: Poultry workers, industry take fight to Capitol Hill over proposal to speed processing lines and Food & Water Watch: Congressional Leaders, Poultry Workers Outraged at Harmful USDA Proposal, Urge the Administration to Take Action. 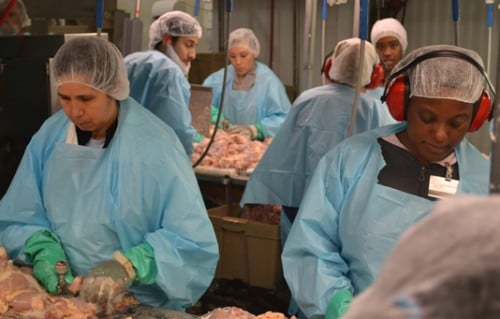 Also in U.S. food worker news, the EPA has proposed updates to the pesticide safety standards, last updated in 1992, that aim to protect farmworkers who use the chemicals. Though the proposed rules seem like a no-brainer, such as requiring a worker to be 16 years of age before handling pesticides, some experts say the new rules aren’t enough to ensure farmworker safety. Read further on Grist: EPA’s new pesticide rules: Will they make a difference? To submit public comment to the EPA on the proposed changes, see the instructions on the EPA website.

This winter, California has been experiencing one of the worst droughts on record. Our friends at Civil Eats has completed a three-part series on the drought, including a report on the current drought, a history of drought in California, and a set of tools for on-farm water stewardship. The series concludes with policy recommendations that would support farmers during times of drought. Access all three parts of the series at Civil Eats: As California’s Drought Goes On, What Can Farmers Do?