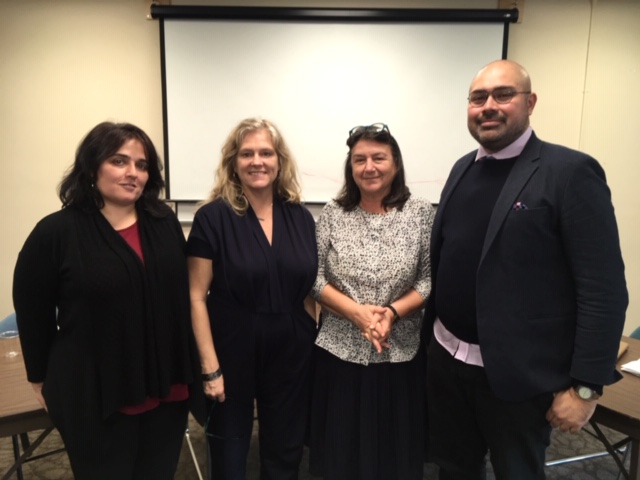 On October 25th, Hilal Elver, the U.N. Special Rapporteur on the Right to Food released the report, “Agricultural Workers and the Right to Food.” In it, Elver exposes the many barriers to the right to food faced by agricultural workers, who comprise one-third of the world’s workforce. To better understand the report’s findings, WhyHunger’s Alison Cohen moderated a panel to discuss its implications. Joining Elver, and providing some U.S. context to the discussion were Suzanne Adely of the Food Chain Workers Alliance (FCWA) and Jose Chapa of the Rural & Migrant Ministry.

The conversation began with the inherent challenge Elver faces as the Special Rapporteur: that the right to food encompasses many aspects of human rights issues. When Elver first introduced the topic of the report, many from the U.N. questioned her decision, arguing that agricultural labor issues should be thought of as workers rights issues. But Elver pushed back and pointed to the significant overlap between food workers’ rights and the right to food. “This right to food is a kind of comprehensive, indivisible human right.” As Elver’s report shows, the barriers to attaining the right to food are comprised of many, interlinking causes including the exploitation of workers, low wages and poor working conditions.

With agricultural workers earning low wages, which are regularly delayed, workers often struggle to afford basic necessities including food, clothing, housing and healthcare. In rural areas of the Global South, eight out of ten working poor earn less than $1.25 per day. What is worse, in isolated areas, workers become dependent on their employers, establishing a cycle of poverty. The International Labor Organization (ILO) has promoted minimum wage contracts to ensure fair pay, but many governments have failed to adopt minimum wage standards that guarantee a living wage for workers. In many other areas, including Australia, Canada, the U.K., and the U.S., even when a state-endorsed minimum wage exists, governments consistently fail to enforce minimum wage laws.   In the U.S, Adely stresses, “wage theft is rampant,” reminding people that, “the worst of the conditions around the world all exist in the United States, too.”

Unfortunately, challenging unfair pay and poor working conditions proves difficult. Agriculture represents the sector with the highest percentage of informal employment, which includes part-time or short-term labor, on-call schedules, multi-layered subcontracts and self-employment schemes. When 60-90% of the labor force is informal, workers are less likely to successfully form unions and establish bargaining power. In fact, only 20% of workers have access to basic social protections, which include social security, health care and workers’ compensation. In many places, including New York, there are even legal barriers that prevent workers from attaining rights. Chapa explains, workers don’t have the ability to legally “collectively bargain…to organize…to have overtime pay…They’re not allowed to have a day of rest.”

Not only lacking these basic protections, agricultural workers are also often excluded from national safety and health regulations. While approximately 170,000 agricultural workers are killed annually, researchers estimate that an additional 26,000 worker deaths annually go unreported. Many of these incidents, however, could be easily addressed through state enforced laws and regulations. Heat stroke, for example, is the leading cause of work-related deaths in the United States yet no requirements for water and shade breaks for agricultural workers exist. Further contributing to these safety issues are exposure to pesticides and unsanitary conditions, which contribute to long-term health issues.

All of these components of workers rights – fair pay, the ability to organize for basic protections, and safety regulations – significantly impact workers’ ability to realize the right to food. When workers are denied basic human rights and face vulnerable conditions, when they cannot organize to achieve a living wage, they struggle to acquire basic resources. But, the panel emphasized, workers rights are human rights and, Adely added, “strong labor rights are the way for us to uphold human rights.” Enforced regulations have the potential to improve the lives of 1.3 billion people. Moving forward, it is important to recognize that these issues are deeply connected. By making these issues more visible and creating space for workers to organize, it is possible protect and promote the right to food of agricultural workers.

Both the Rural & Migrant Ministry and FCWA are working toward this goal. The Rural & Migrant Ministry, which helps agricultural workers in New York State, has raised awareness around workers issues and supported legislative change. In January 2018, they introduced the Farmers Fair Labor Practices Act to the New York State Legislature, which, if passed, would help end injustice on New York farms. Among other provisions, the Act would establish an 8 hour workday for farmworkers, require workers’ compensation and ensure that housing facilities meet basic standards of living. Meanwhile, FCWA organizes for better wages and working conditions for all workers in the food chain – from those who plant and harvest food to those who sell it. Representing around 340,000 food workers in the US and Canada, FCWA supports workers through movement building, campaigns, and trainings.

WhyHunger believes that it is critical to work at the intersections of labor, economic justice and human rights to address the root causes of hunger and poverty. That is why we accompany and partner with organizations like The Farmworker Association of Florida, Community to Community, Coalition of Immokalee Workers and El Comite de Apoyo a los Trabajadores Agricolas (CATA), among many others are passionately engaged in the struggle for a more just food system. Whether working on the state or national level, these organizations are supporting workers in their efforts to achieve the right to food.