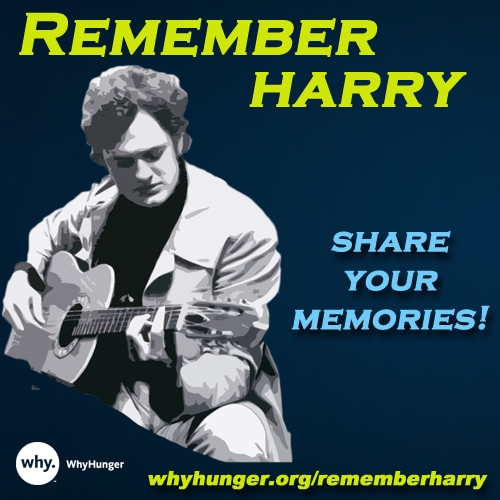 I never met Harry Chapin, but because WhyHunger has been so profoundly shaped by Harry’s vision, values, energy, and music, sometimes it feels like I have. The more I learn about Harry, the more I see him everywhere—in ways both extraordinary and mundane.

When the WhyHunger staff gathers to fold and stuff thousands of thank you letters, someone always reminds us that Harry Chapin was the most efficient envelope-stuffer we’ve ever had. Despite his fame, Harry was never too important to lick stamps, give someone a ride, or invite folks to dinner. We hear this echoed over and over by all who met him – everyone seems to have a Harry story.

When the crowd rises from their seats at the end of WhyHunger’s annual Chapin Awards to link arms and join in a goosebump-inducing rendition of “Circle,” we remember the power of Harry’s music to unite people, to tell the truth, and to move people to act.

When we see the movement growing and the tangible impact of WhyHunger’s work, we hear Harry’s words echoing: “If we can get away from the uniquely American perception that if something can’t be done immediately it isn’t worth doing, then I think the hunger movement, this small but growing minority of us, can have a truly significant impact.”

As you may know, this Saturday marks the 35th anniversary of Harry’s passing, and we want to hear your memories of Harry: What did you love about him? How did he impact you? Which of his songs are the soundtrack to your life? Visit whyhunger.org/rememberharry to share your story.

We also invite you to help WhyHunger accomplish Harry’s vision by joining Harry’s Giving Circle, a special group of donors who understand that giving a little each month can make a big impact! In honor of this anniversary, we are asking 35 people to follow Harry’s philanthropic lead and join Harry’s Giving Circle.

We hope you will share with us in honoring Harry this weekend!