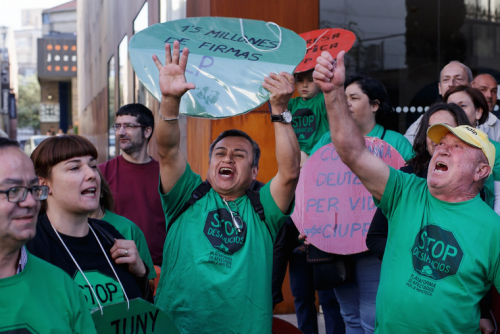 In the Spanish municipal elections in May this year, a tide of social justice movements swept populist groups into local government. Cities across the country, including Barcelona and Madrid, saw unprecedented participation of everyday people in politics. On the eve of the elections, a delegation of 20 New York City-based activists and organizers traveled to Spain, to learn firsthand how Spanish communities were using social movements to take command of their living conditions, and to pave the way for an electoral insurgency and a Spanish democratic revolution.

Last Tuesday, July 7, 2015, the delegation gathered at CUNY’s Murphy Institute to report back on their experiences to an audience of about a hundred people. Employing some of the techniques they had picked up on their travels, the organizers split the talking points evenly between themselves, encouraged questions and group discussions and, of course, provided food. The mood was convivial and the discussion was frank.

Organizer Elia Gran outlined the economic situation in Spain, where education has been privatized, social security has been limited, 6 million people are unemployed and 3 million people are officially in poverty. Gran explained that Spanish activists are vigilant in refusing to accept the term ‘economic crisis’ – they call the 2008 crash a ‘scam,’ and point to current housing conditions as an example. Approximately 200 people are evicted everyday in Spain, in many cases because of foreclosure. Spain has a mortgage law unique to Europe: if your house is seized by the bank, your mortgage is not forfeit. Forcibly removed from their homes, many Spaniards are additionally crippled by continuing mortgage debt. The irony here, Gran reminded the audience, is that leading up to 2008 the Spanish government built a record number of new houses and urged citizens to buy the houses as a ‘stable investment.’ When the market crashed the banks were bailed out, but the new homeowners were not.

Faced with homelessness, poverty and stringent austerity measures, Spanish communities have banded together to form social justice groups and new political platforms. Gran described the movement as, “Not a movement about the left or the right, but about asking for real democracy and accountability of governments.”

The New York delegation shared information about a number of the movements that have emerged:

The NYC to Spain delegation outlined a number of crucial ‘takeaways’ they had observed on their trip, which have contributed to what Benson described as “the condition of possibility” for social justice in the Spanish electoral race. Their observations included:

Jessica Powers, WhyHunger’s Program Director of Nourish Network for the Right to Food, was one of the delegation members who spoke about the importance of social centers in Spain as hubs for the movement. Powers explained that the delegation plans to continue to put their learning into practice. “The idea is to take some of the things we’ve learned, and cultivate things here in three areas: in the movement-building area, including Mayday Space [a community and movement space being set up in Brooklyn, which some of the delegates are involved in]; there’s a group that’s thinking about insurgent electoral politics and how to get candidates locally who come from movements and much more to come.”

Powers thought that the Spanish social justice movement was important for Americans to understand, as an example of a first world country grappling with austerity measures.

The delegation has some money left over from their fundraising, but rather than reimbursing themselves for travel expenses, they have opted to reinvest the money to fund another delegation to travel to Spain for the parliamentary elections in November to keep learning. More information on their trip is available at NYC to Spain.