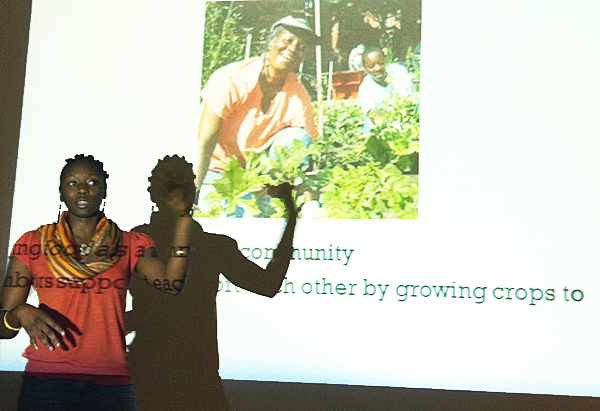 by Patricia Rojas and Siena Chrisman

The 2nd Annual Black Farmers and Urban Gardeners Conference was held in the Bronx at Hostos Community College, a few stops away from Yankee Stadium. The annual gathering empowers growers, eaters and activists to explore and address the relationship between food and health in Black communities.

Participants discuss issues of race, class, health and food through panel discussions, workshops and field trips visiting some of the most innovative and inspiring work happening in local NYC communities.

This was my first time at the conference and, happily, it was in my backyard. (Go Bronx!) The conference began with a few words from Karen Washington, founder of La Familia Verde, a coalition of community gardens in the Crotona, East Tremont and West Farms neighborhoods of the Bronx.  She introduced the two keynote speakers, K. Rashid Nuri, of Truly Living Well Center for Natural Urban Agriculture in Georgia, and Audrey Rowe, Food and Nutrition Service (FNS) Administrator at the U.S. Department of Agriculture (USDA).

Mr. Nuri began his presentation by telling the audience to fight every fight as if it will be your last. Food is a necessity and a right, but trying to obtain, grow and eat healthy food has become a battle. He spoke of growing food where you are, giving a push to those of us who do not have land but might have a little extra space in our apartments. He also spoke of the amazing work that Truly Living Well Center for Natural Urban Agriculture is doing in downtown Atlanta amidst the skyscrapers of the city. The Center is an organization that works to engage the community in developing local food systems through education and food production.

Ms. Rowe, a native New Yorker, talked about how some changes in her life led her to start making healthier choices. Now, the belief that we all need healthier food drives her work. Rowe served as Deputy Administrator for Special Nutrition Programs at FNS, leading the effort to pass the Healthy, Hunger-Free Kids Act of 2010, the legislative centerpiece of First Lady Michelle Obama’s Let’s Move! Initiative to end childhood obesity in a generation. Ms. Rowe spoke of her experience starting the Black Oaks Center near Chicago, and her efforts at the Advisory Council on Minority Farmers. She encouraged the audience to let our Members of Congress know how important FNS programs are.

Later in the day, Kyoka Akers and Jason Patterson, Live Real Real Food Fellows, ran an informative workshop called “Building Bridges: we must tread water in order to build bridges for those who follow,” addressing barriers and opportunities for engaging black youth in food justice work. Kyoka and Jason both work with youth, and their metaphor of building bridges ran throughout the workshop, with particular focus on the river of disengagement and discussion of specific tools to get the other side.

They talked about one point in particular that is vital but not often discussed: the critical importance of recognizing and teaching history when working with African-American youth. Young African-Americans do not grow up seeing positive images of farming heritage – farmers, from history to picture books, are generally portrayed as white, and of course, the primary association is the legacy of slavery. Engaging youth to learn about the rich and positive black agricultural history – from the innovations of ancient Egyptian farmers to George Washington Carver to Will Allen – is a key way to make farming seem not only relevant but something to be proud of.

The second annual Black Farmers and Urban Gardeners Conference offered its 300 attendees amazing opportunities to explore the themes of health, wealth and justice and connect with each other with its two keynote speakers, 24 workshops and tours of more than 20 gardens across the city and New Jersey. The conference was enlightening, educational, and entertaining and seeing so many people gathered in the Bronx was a truly great experience.