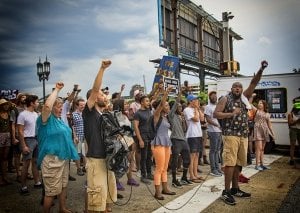 Like so many of our partners across the country organizing for equity in the food system and an end to hunger, we stand on the side of justice and denounce the actions and words of those who stand for hate and violence. The recent events in Charlottesville, VA as well as similar rallies and actions propagate racism, bigotry and injustice.

Racism persists because it has been codified in structures, systems and policies, including the food and agricultural sectors in the U.S. One in four Latino children, and one in three Black children often go to bed hungry (compared to 1 in 6 white children) in our United States. Over 30 million Americans live in places that lack access to healthy food, especially Native American communities in the rural West, and low-income families of color living in urban areas. One in six of us work somewhere along the food chain earning poverty-level wages that prevent families from affording nutritious food on a regular basis, with Blacks, Latinos and women most likely to earn minimum, or sub-minimum wages. It is clear that racism is alive and well in our food system and it is alive and well in our country. Those of us who believe in social justice are among the majority and our resistance has to be strong and unified.

The intersection of hunger, racism and economic inequality needs to be addressed and coupled with actions and policies that move us into a future built on equality and shared prosperity for all. Together we are organizing and living our way into a new world where racial and gender equity are coupled with economic justice. We see evidence of this courageous world rising up in the actions of the grassroots organizations and movements that WhyHunger supports – both in this country and around the world. We are committed to supporting and standing in solidarity with these grassroots leaders who are shaping the pathway towards a society where everyone has the right to food, and the opportunity to a dignified life rooted in the interdependence of community, family, the natural world, and the struggle for democracy.

We are emboldened by the statements made by several of our partners in the wake of Charlottesville and stand in solidarity with them:

If you are looking to take action, check out the below resources and add your own:

Upworthy: Feeling Hopeless After Charlottesville? 16 Ways You Can Make a Big Difference

Bustle: The “Things You Can Do Re: Charlottesville” Google Doc Has a Ton of Incredible Ideas