In July, the Texas Food Bank Network unveiled a new website, StopTheHungerClock.org, to bring public awareness to the time remaining— 69 days as of August 23rd— until major funding cuts reduce SNAP (formerly food stamps) benefits to every household that participates in the program. The 2009 Recovery Act provided a temporary boost to SNAP benefits in an effort to help families in need during the harsh recession, but that addition is scheduled to end on November 1, 2013. These cuts come much earlier than they were intended because in 2010, Congress opted to fund education jobs, Medicaid, and the Healthy, Hunger-Free Kids Act by taking funds from SNAP.

These cuts will cause serious hardship for SNAP participants, who include 22 million children and 9 million people who are elderly or have a serious disability. For families of four, the cut will be $36 per month— a total of $396 for November 2013 through September 2014, the remaining months of fiscal year 2014. It will be the equivalent of taking away 21 meals per month for a family of four, based on calculations using $1.70 to $2 as the cost per meal. 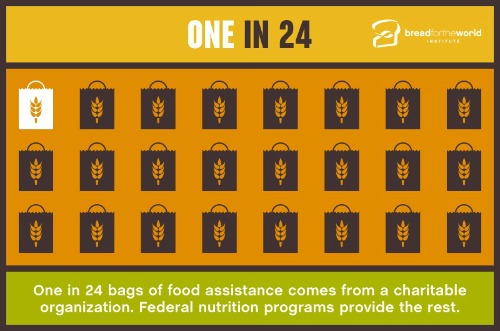 Altogether, the total cut is estimated to be $5 billion in fiscal year 2014. Let’s put this in perspective: the USDA provides $114 billion of food per year through its nutrition programs, whereas emergency food providers provide people in need with about $5 billion of food. Bread for the World’s infographic depicts this as one in every 24 bags of groceries. As Joel Berg, executive director of New York City Coalition Against Hunger, put it, the $5 billion cut “makes it as if every single emergency food provider in the United States didn’t exist.”

Those following the Food and Farm Bill are aware that deeper cuts to SNAP may be on the way before the current law expires on September 30th. Congress is in recess through the first week of September, which makes this a crucial time for anti-hunger advocates to engage with their legislators.

Here is a round-up of helpful resources to help you advocate for fully-funded SNAP: