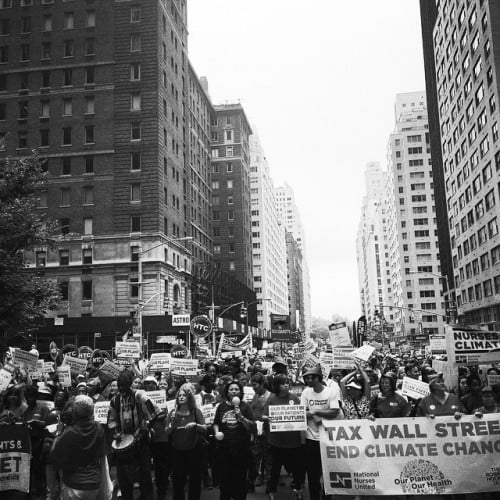 In her most recent article at the Huffington Post, Salena Tramel, scholar and a powerful writer, put it clearly: “The protracted debate over the severity of climate change is over, as clearly indicated by the UN’s emergency meetings and the IPCC’s landmark climate report. What remains to be seen is who will be in charge of righting this wrong.”

This week, United Nations members meet in Lima, Peru at the 20th Conference of Parties on Climate. While the gathering is important, it can be difficult to have much faith in these negotiations, because of the lack of transparency and accountability on which they are based. Dominated by the same mindset (of free trade agreements and industrial agriculture’s misleading mission “to feed the world”) that brought us in to this environmental crisis, it seems almost  naïve to hope these talks will establish mechanisms to demand real accountability .

Communities and social movements represented in the recent mega-protest for action on climate change, the People’s Climate March that brought nearly 400,000 people to the streets of New York City last September with participating events worldwide, should be at the table leading these negotiations. But it will not happen in Lima, neither in Paris during the 21st Conference of Parties on Climate Change next year. The only way out of the climate crisis is through a broader alliance between social movements led by peasants and indigenous people.  Without the knowledge and solidarity of those who are left out of the negotiations table, the stewards of Mother Earth, we will not find the right strategies to save our planet and ensure everyone has the right to nutritious food.

Read more about the People’s Climate March in the Huffington Post and stay to to date with what is happening in the streets of Lima, Peru with #COP20.