Interfaith lessons in cultivating the soil – and the soul – with Fred Bahnson.

There is a word in the Koran called Ta’amul which Fatemah Hermes translates as “observing and absorbing the world around you.” For Hermes, a 30-year old Muslim woman from Egypt who now lives in Champagne-Urbana, IL, gardening has proved to be an exercise not only in cultivating food, but in cultivating Ta’amul. “We Muslims believe that to contemplate the world—the sky, the soil, the plants—is a form of worship.”

There are a number of clear descriptions in the Koran, she said, about food and how it is grown. “The crops start out green, then turn to yellow, then die, then come back again the next year. And if you look closely at that process, you have to know that there is a Creator, there is a God. We miss out on that process when we just get food from a store.”

Admittedly, Hermes has had a couple of failed gardening attempts, but thanks to a new Interfaith garden she has helped plant, she has finally gotten it right. In addition to studying for her graduate degree in molecular biology, Hermes attends the Central Illinois Mosque and Islamic Center. Right across the street from her mosque sits First Mennonite Church. In 2010 Hermes joined up with Brian Sauder, a member of First Mennonite and employee of an interfaith group called Faith in Place, and started a joint garden project between the two congregations. They saw the garden as a way to bridge cross cultural and religious boundaries between Christians and Muslims as well as produce tasty food. They called it “The Peace Garden,” and they decided to donate all the produce to the local women’s shelter. 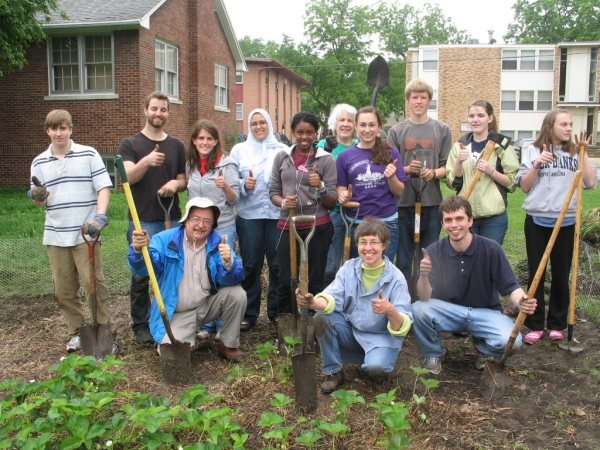 Before planting the first seed, Hermes and Sauder organized and co-taught an 8-week class on the food system. Attended by members of both the mosque and the church, the class first spent several weeks studying the industrial food system and its ills. Sauder was intrigued by the unique perspectives Muslims have on food. He cited, for example, the Prophet’s wisdom against over-eating. Hermes explained: “In Islamic tradition, the Prophet Mohammed taught that you should eat just enough to sustain yourself. If you’re feeling like eating more, like at a social gathering, then you should imagine your stomach divided into three parts: one third for food, one third for drink, and one third to remain empty for breathing.” The class looked at the ethical questions posed by such issues as GMO’s, hunger, and migrant labor. Participants were invited to bring their unique faith perspective to bear on the ethical challenges, and to hear what people from another faith tradition had to say as well. That led to the planting of the Peace Garden.

Sauder sees much possibility for using food and agriculture as a way to connect different faiths. Whether it’s Muslim, Baha’i, Unitarian, Jewish, or Christian, they all share a common bond. “Of all the congregations we’ve worked with,” he said, “the constantly recurring theme is stewardship for the land.”

Food is a universal point of connection, says Rev. Claire Butterfield, Executive Director of Faith in Place. “When people migrate, the last cultural trait they lose is food. It’s a very durable cultural medium. Food provides a way of talking to each other, even when we aren’t very good at doing that.” With a desire to foster interfaith dialogue around food, Faith in Place started a program called Takwa, a grass-fed meat co-op for Muslim communities in the Chicago area. The animals were raised and slaughtered according to Halal dietary standards. Takwa has now become its own business called Whole Earth Meats.

One of the most memorable Peace Garden moments for Hermes occurred during the month of Ramadan. During that month Muslims consume no food or water from sunup to sundown. “Even though I wasn’t eating during daylight hours,” she said, “I was still growing and preparing food in the Peace Garden. It was very meaningful to me to know that even though I wouldn’t eat that food, that someone who was hungry was going to eat it.”

For Hermes, the most important thing about food and gardening is the way those things connect us with both God and neighbor. What has she learned working with the Mennonites? “We each have our own faith, but we live in the same place. Our faith is about our relationship with God. But then we also have our relationships with each other, and we should work on those relationships. A garden helps us do that. And the fact that the food is going to the women’s shelter makes it that much better.”

Special thanks to Fred Bahnson, author of Soil & Sacrament: A Spiritual Memoir of Food and Faith.