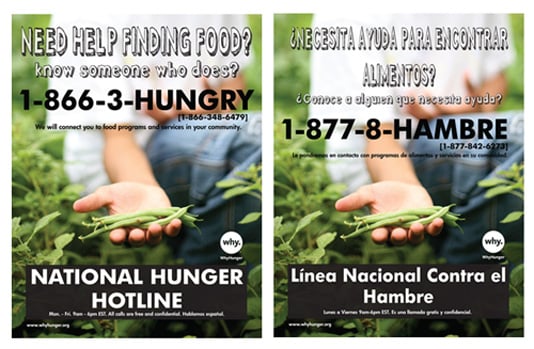 The National Hunger Hotline (NHH), a service of WhyHunger’s National Hunger Clearinghouse, provides real-time referrals for people in need across the U.S. to emergency food resources and assistance programs. Receiving an average of 700 calls per month, the NHH is a portal to information, assistance and resources, ultimately  empowering families and individuals to meet their vital needs including fresh healthy food.

A father from central Florida recently called the hotline in search of assistance. The man was laid off from his job a few months ago and has not been able to receive assistance because his unemployment benefits exceeded income limits. The man was hit with an expected turn of fate when his young child became ill, forcing him to sell his truck, drain his savings account and remove all the equity from his home to pay the medical bills because the family did not qualify for Medicaid.

WhyHunger’s NHH advocate was able to find two local pantries within five miles of his home. The advocate explained that he should apply for the Emergency Food Assistance Program (TEFAP) through his local food bank as well as seek the resources at St. Vincent de Paul Society.The man audibly began to cry, saying that he “hates having to tell [my] little girl, ‘no, daddy can’t buy you a hamburger right now.’”