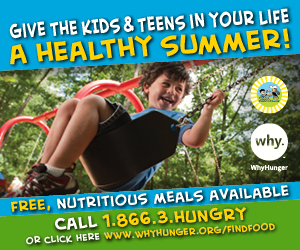 Meet Mike, a single father from a small town in Florida, who called the National Hunger Hotline after finding the number in the phonebook. His ex-wife recently moved to Ohio with their two daughters, ceding him custody of their three-year-old son. Mike explained that he is unemployed and searching for a job, and in the meantime he is also working to sort out administrative problems with his SNAP (formerly food stamps)  case and his son’s Medicaid coverage.

Since he is not currently receiving benefits, Mike depends on the food pantries in his area, but is only allowed to visit once a month and only receives enough food for a few meals. Sometimes food pantry volunteers are kind and give him an extra bottle of juice or box of mac and cheese for his son, knowing he doesn’t receive food stamps. It still isn’t enough. He told the Hotline advocate that this was the first time he had ever been responsible for a child on his own and that his son was his “best friend in the world.” He makes sure his toddler son is able to eat two to three meals each day, but this is only possible if he cuts back to one meal a day.

The Hotline advocate gave Mike contact information for his local food bank, several more food pantries and the Low-Income Home Energy Assistance Program, because he is having trouble paying his utility bills. She also told Mike about the Summer Food Service Program, which provides children in low-income areas with free meals during the summer.

Are you a struggling parent? Know someone trying to make it all work on a very tight budget this summer? Call the Hunger Hotline.