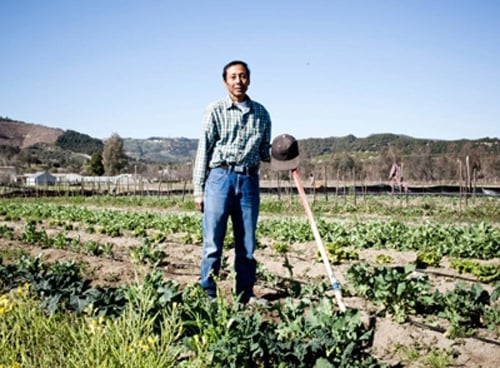 This spotlight is a feature of WhyHunger’s digital storytelling that showcases grassroots organizations and community leaders through dynamic stories and pictures, to give a real view of projects that are working to alleviate food insecurity and increase communities’ access to nutritious food. We believe that telling one’s story is not only an act of reclaiming in the face of the dominant food narrative of this country, but also an affirmation that the small acts of food sovereignty happening across the country add up to a powerful, vital collective. Up today: International Rescue Committee, Austin, TX. Story and photos by David Hanson.

This is remote for southern California. It’s quiet. Roosters crow. Birds chirp. A few cars drive by. The International Rescue Committee’s Pauma Valley farm began here in 2012 on what was a defunct non-profit center.
Bilal drives an hour to the farm most days of the week since he works with the International Rescue Committee (IRC) as a leader of the Somali-Bantu group of refugee immigrants that arrived to San Diego’s City Heights neighborhood between 2004 and 2006. For Bilal, the drive is not ideal, but considering what it took to get him to America and then to a job on a farm, an hour driving his Honda Odyssey mini-van is nothing.