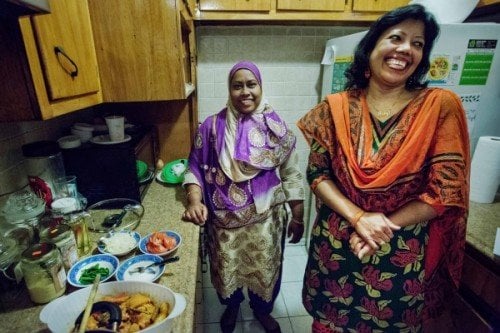 This spotlight is a feature on WhyHunger’s digital storytelling website, Community Voices, that showcases grassroots organizations and community leaders through dynamic stories and pictures, to give a real view of projects that are working to alleviate food insecurity and increase communities’ access to nutritious food. We believe that telling one’s story is not only an act of reclaiming in the face of the dominant food narrative of this country, but also an affirmation that the small acts of food sovereignty happening across the country add up to a powerful, vital collective. Up today: SAPNA, the Bronx, NY. Story by David Hanson.

The apartment’s small kitchen steams with the flavorful scent of cumin, ginger, turmeric, cardamom, clove, cinnamon and garlic. Slender pieces of chicken simmer in a yellow curry. On a platter, a handful of bright green, fiery-hot chili peppers sit atop fresh-sliced tomatoes and onions. A bowl of steamed rice waits to the side. Rubyna (Ruby) Begum and Rahima Akhter work their culinary magic, dressed in traditional salwar kameez dresses, both just as colorful as the brilliant meal being prepared. It’s almost noon and the two women are in the office of SAPNA, a non profit established in 2008 to develop, implement and evaluate community-led programs that support South Asian women in the Bronx’s Westchester Square and Parkchester neighborhoods. Today, Ruby and Rahima will demonstrate a typical cooking partnership that is a core program of SAPNA’s approach to addressing the social and health-related needs for many of the Bronx’s South Asian women. 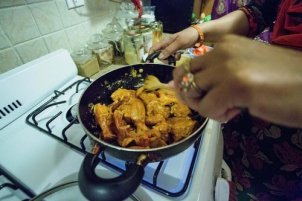 Rahima came to the US only a few years ago. It was a completely foreign landscape and language. For her first two years, Rahima never wanted to take the subway alone, only with her husband. Finding work was even more of a challenge. Ruby has been in the US for almost two decades. She remembers arriving here as a young bride, her husband having immigrated by visa a few years before she arrived via the diversity visa lottery extended to Bangladesh until recently. She didn’t know the language either. Meeting people and establishing community, especially one with a shared language and experience, seemed impossible in the vast urban landscape of the Bronx.

Thousands of immigrants arrive to the US each year. They come to flee oppression or poverty in their homelands or for the promise of opportunity through education. The idea of America as a refuge that offers hope, freedom and a new beginning has seduced immigrants for more than 500 years. But often the reality feels like landing with your family and a few bags onto a distant planet. As soon as the feet hit the ground in the new home, day-to-day life becomes a challenging reality.

Many immigrant arrivals like Ruby and Rahima move into apartments in an urban environment filled with indecipherable signs, unrecognizable foods and a transportation system that she or he isn’t yet qualified for (driving) or can’t navigate (public transport). In many cases with South Asian women like Ruby and Rahima, the husband dives into a feverish job search, hopefully landing something, but likely a position that offers low pay and long hours, sometimes with a distant commute adding to the time away from home. The kids get swept into the public school current. And the women are often left at home with their social network and support system on the other side of the globe.

In many South Asian cities or villages, households live as joint families, meaning a mother and father sharing a home or group of homes with their grown children plus their spouses and children. Often, the women work in the home, sharing responsibilities with mothers, aunts, sisters, or cousins. It’s a tight-knit community. If not in joint family settings, most South Asian women interact throughout the day with neighbors, many of whom are family members living under different roofs. When a woman immigrates, it is most often with only her husband and children. She leaves behind the rich tapestry of community that existed in and immediately surrounded her home. The immigrant’s sudden immersion into a disorienting environment and language coupled with an utter lack of community support can be a debilitating combination. 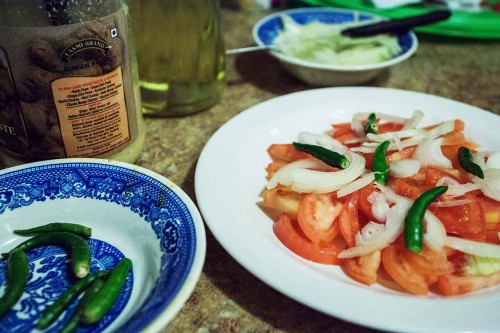 For many South Asian women, cooking is one of their strengths and a touchstone to the comfort of home. But it can be a pitfall, as well. Back home the most accessible food items were fish, legumes and vegetables, all very healthy, lean staples. Meat was rare, often pricey, and considered a luxury. Here, because America subsidizes the meat industry, it’s a much more accessible, affordable option, despite its ecological and health costs. For women like Ruby and Rahima, it can be easy to rely on their new country’s cheap, filling meat products, not to mention the myriad of processed junk food options loudly displayed in supermarkets and corner stores. A shift toward unhealthy eating habits like increased meat and processed foods can lead to chronic diet-related illness like diabetes and heart disease, which compound the mental health strains. The link between mental health and diet is a tight one and it can often feed on itself: isolation begets depression begets unhealthy eating begets obesity, possibly disease, which worsens the depression and entrenches the isolation.