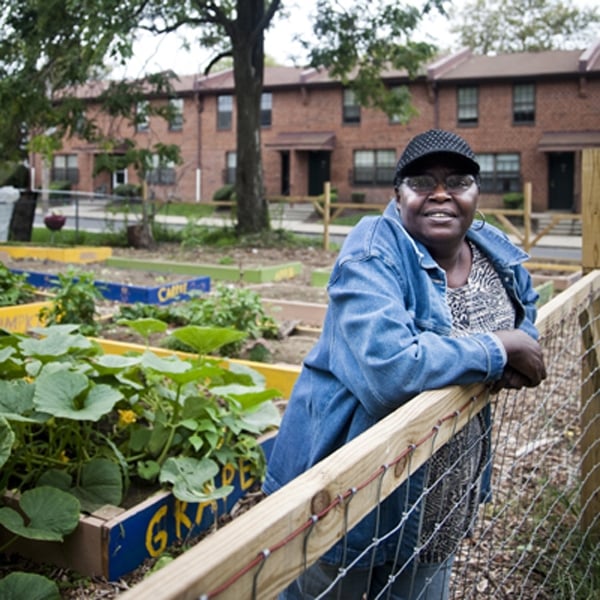 This spotlight is a feature of WhyHunger’s digital storytelling that showcases grassroots organizations and community leaders through dynamic stories and pictures, to give a real view of projects that are working to alleviate food insecurity and increase communities’ access to nutritious food. We believe that telling one’s story is not only an act of reclaiming in the face of the dominant food narrative of this country, but also an affirmation that the small acts of food sovereignty happening across the country add up to a powerful, vital collective. Up today: Urban Tree Connection, Philadelphia, PA. Story and photos by David Hanson.

A willow tree grows on a corner lot in the Haddington Neighborhood of West Philadelphia. It stands twenty-five-feet tall and thirty feet wide, as shady and rain-proof as a gazebo. Lisa Barkley is in her 50s now, but she remembers climbing the willow tree as a girl.

“I didn’t know it was a willow then,” she says. “When I found out, I couldn’t believe we had a water-thirsty willow tree right in the middle of the city. Then I discovered there’s a creek running under this lot.”

A babbling brook running beside a willow shade tree is difficult to imagine in Haddington. This part of West Philly is densely packed with empty lots and townhouses, some falling in on themselves, or burned out from the inside through the roof, only the molded siding and desperate vines clinging to the original structure. But despite the decay in the buildings, the urban bustle of life courses through the streets – two mechanics under a car by the curb, senior citizens in formal dress leaving a church service, kids on bikes, guys hanging under the eave of La Pearl Social Club. Lisa has lived in Haddington her whole life. She says it’s not what it was in the late fifties and sixties when she remembers a happy childhood playing in the streets, but it’s better than the low point a few decades ago.

The creek might be long-since buried beneath pavement and homes, but the willow tree still pulls from it and around the willow Lisa and her partner Ann Topping, with help from the Urban Tree Connection and a growing contingent of neighborhood volunteers and children, have cultivated an orchard of peach, apple, cherry, plum, apricot, nectarine, and pear trees. Behind the orchard sit brightly painted picnic tables in an old parking lot. Colorful concrete chunks block vehicles from entering the lot. It’s not a state-of-the-art playground as found in wealthier neighborhoods, but it’s a big step up from the lot’s previous life as hideaway parking for stolen cars.

Across the alley that leads to Lisa’s public housing unit (the same one Lisa’s now-deceased mom moved her and Lisa’s siblings into after her husband died), a patchwork of raised beds grows vegetables and herbs, tended to by the five- to seventeen-year-old Veggie Kids program. Some of the kids have stayed in the program for five years, growing with the produce.

Lisa walks me down a side alley and onto the main artery of 54th Street. It’s the route she’s taken a million times to get to the Capital Theater on 52nd and Gerard. We pass the old fire station that’s been renovated and converted into a senior center. Behind it, in another empty lot, grows a rose garden tended by the seniors. Dark green vines texture the red brick walls surrounding the patch of urban roses. A mural painted on a two-story brick wall to one side of the garden depicts a bucolic, blue-sky landscape with an older man seated against a tree, reading.

We zig-zag through the neighborhood and Lisa points out three more growing projects on formerly empty lots. One has raised beds with weeds growing from them. She tells me that the residents in those apartments didn’t take much interest in the garden. No one stepped up to take charge like she and Ann had done with their patch eight years ago.

“It takes a spark from one or two or three residents,” she says. “Someone has to stick with it and make it happen, especially at the beginning. A couple big problems exist in neighborhoods with lots of rental or public housing: there’s not much to do, and there’s little ownership of the place if you’re just renting. It’s not yours so why put effort into it. These garden and farm projects give people something to do and something they can feel ownership of.”

The Urban Tree Connection started all this growth ten years ago with landscape architect Skip Weiner leading the way. Skip grew up in West Philly in the forties and fifties, twenty years before Lisa roamed the streets. Skip was here when the population was largely white working class. When the whites moved further into the suburbs in the 70s, Weiner saw black people move into the neighborhood, creating a stable, working class community, the one Lisa grew up in.

Meanwhile, local boy Skip had received his degree in landscape architect from U Penn, during the early ‘70s when there was a lot of conversation about community health. After he lost his conventional landscape architecture job in the late 80’s, Skip started working with kids on urban tree lot plantings. He eventually found himself working with an after-school program in Haddington.