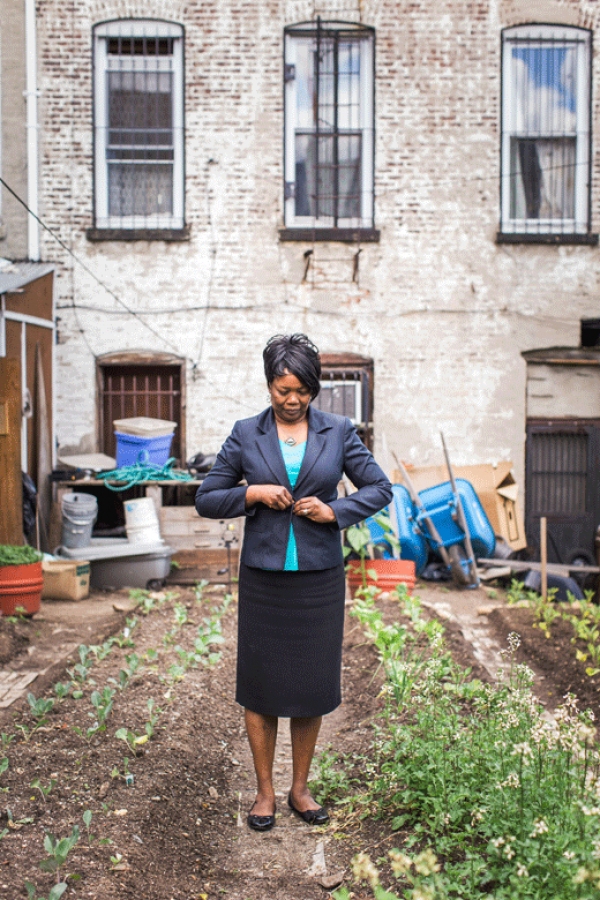 Dr. Melony Samuels never intended to start a multi-borough food pantry and social service operation. She just wanted to help a mother of four whom she’d heard was in need. At the time, Dr. Samuels worked with a Brooklyn corporation and lived in the Jersey suburbs. She and her husband drove 62 miles to meet this woman and bring her food. A commitment was made and Dr. Samuels continued providing holiday food to the family, then a few more families. Then she left her job and dedicated her life to feeding people. Everyone thought she was crazy.

Now Dr. Samuels is the founder and executive director of Bed-Stuy Campaign Against Hunger (BSCAH), which serves over 30,000 individuals per month. The program operates out of a tiny office in Bed-Stuy, with a 2000 square-foot supermarket-style “choice” pantry next door and a total of one acre of farmland (plus chickens) between Brooklyn and Queens. Fourteen full-time staff and a handful of volunteers work with BSCAH. At the desks in the office, staff welcome first-time visitors, walking them through a health and social history form to understand their needs.

But BSCAH didn’t pop up overnight. Dr. Samuels began the pantry after her initial interest in that single family years ago. She followed the model of most food pantries: gather food from national agencies and grocery stores, package it, and distribute to the needy.

“But by 2006, as we were just beginning,” says Dr. Samuels. “We noticed families were taking the food out of the bags and leaving it on the street. Or they’d trade with other people. They didn’t want a lot of the food we were giving. I’d left my job, what might have been the silliest thing I did all my life.”

It sounds so strange to question the benefits of giving food to people in need. But simply giving out calories to families and individuals is proving to often do more harm than good over time. It is clear now that high-sodium, high-sugar, high-fat, empty-calorie foods lead to obesity and diabetes and hyper-tension, ailments occurring frequently in food-insecure communities. Unfortunately, poorly managed food banks can play into this “Hunger Obesity Paradox” when they provide unhealthy products to their clients, many of whom don’t have access to another, potentially healthier food choice.

“When you find out that you are not only feeding a person, but feeding them the right way, you feel that you are doing the right thing,” says Dr. Samuels. “Giving someone food that will build their entire immune system is a totally different concept.”

So Dr. Samuels changed the approach. She brought choice into the equation, and she and her volunteer staff created a small choice pantry, inviting the recipients to select their own items from a curated offering. She’d heard residents talk about diabetes and hypertension and cancer. BSCAH did a survey that showed 23% of the families served were diabetic. So the pantry offered a high percentage of fruits and vegetables. On the opening day they operated for nine hours, packed with people going through the line.

But, still, Dr. Samuels and her staff could see that they needed to dig deeper into the community and continue refining their involvement with clients through food.

The challenges in food insecure communities are complex and nuanced, depending on individual and households. For some there’s a need for education around the best food choices and how to prepare raw produce. But for many households there is someone who knows how to cook, so the main obstacle to a healthy diet is lack of access. Dr. Samuels and staff realized that they needed to put the healthy, whole, often raw food on the shelves and offer education with it. So BSCAH brought in nutritionists to conduct evening cooking demos and workshops to educate pantry participants in how to use healthy foods.

The fruits and vegetables began leaving the shelves. BSCAH staff began to curate the grains and milk, aiming for low- or no- sodium and sugar products. There is white bread and some sugary cereals but they are placed inconveniently on the lower shelf, with the healthier options at eye level. Volunteer staff answer questions throughout the shopping experience.

The most important, transformative element to the BSCAH work moves beneath the surface of every aspect of the program, from the moment the client walks into the office for his or her introductory interview, to their trips through the choice pantry, to the time when, perhaps, he or she becomes a volunteer at one of the urban gardens. The BSCAH grounds each step in dignity. That comes with choice and with a pantry that is set up to resemble a well-organized, shelved grocery store (not boxes of food to pick off pallets), to a helpful, respectful staff willing to guide clients through the food selection process.

Now, by the end of the week, the fruits and vegetables are usually gone, they’ve become so popular. BSCAH recognized the need to grow their own food, so the volunteers started a 2000 square-foot garden behind the office. They built a chicken coop and they now harvest eggs along with greens and beans and squash and tomatoes. Eventually, they took over a vacant lot up the street. Now BSCAH harvests from an acre of small farms and gardens in Brooklyn and Queens. It’s another way to bring dignity to the community by transforming the landscape into a beautiful, useful garden.

Dr. Samuels and her staff learned to tap into the pulse of the community and understand the realities at play. Realities as small as reducing the amount of packaged glass in the pantry because clients who spend time in homeless shelters tell them that glass is not allowed. But on a larger scale, BSCAH has become more than just emergency food relief. They have incorporated youth training, outreach programs for seniors, the widespread urban agriculture component, and a farmer’s market in the Rockaways.

With the networking support of WhyHunger, Dr. Samuels and BSCAH has begun a partnership with the Shore Soup Project, an up-and-coming community organization in the Rockaways. Shore Soup will be conducting cooking demos at the BSCAH farmer’s market and using BSCAH-grown produce in their soups. Dr. Samuels and her staff are sharing their deep knowledge of fund-raising, partnership-building, and organization growth, including supporting Shore Soup as they acquire land necessary to expand. BSCAH has become involved with WhyHunger’s community learning project, another way to share their experience in a broader context.

BSCAH feeds over 30,000 people per month. Just as important, it listens to them. It’s become as much a bank of social knowledge as it is a pantry of food.